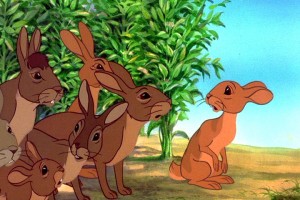 2014 Update: Oh how I wish someone would re-release Watership Down on Region 1 blu-ray in a format that captures the vivid beauty of the theatrical release. The current American DVDs show that they were produced from a worn and faded print. Attention, lords of the Criterion Collection! Save this timeless, exemplary work!

Before you choose Martin Rosen’s animated feature Watership Down as a movie-time babysitter for your kids, please note: This is not Finding Nemo.

No, you should sit yourself down for this one. Don’t listen to anybody who writes it off as a “cartoon about bunnies.” Watership Down is distinct among animated films because it is an exemplary adaptation of a massive, complex literary work into an 92-minute feature. The film fuses stunning beauty, smart scripting, a splendid original score, unforgettable characters with excellent voice casting, and an approach that refuses to dumb down the material for moviegoers. This is a serious film for serious moviegoers. It’s also heartbreaking, suspenseful, and unflinchingly realistic in its depiction of animal behavior… violence and all.

Those bright white teeth you see on the poster? That snare you see throttling the rabbit in the grass? That’s a fair representation of the film’s stark realism. It’s not for small children. As in the real world, death can strike these small animals in alarming, arbitrary, unanticipated ways. And when it comes, there is blood. Sometimes, a lot of blood. (It’s been reported that Richard Adams’ novel was a way in which he described some of his experiences during the Battle of Oosterbeek in the Netherlands in 1944.)

Having said that, I would not shield young teens from the film. In fact, it might be more meaningful for them than any of the Disney cartoons, if only for its uncompromising attention to real-world tensions and challenges. I first saw the film when I was ten years old. It scared me, no doubt about it, with grisly violence beyond anything I’d seen on the screen before. But it also fascinated me, and I returned to the film again and again with a sense that it wasn’t just entertainment — rather, it was relevant. It seemed to engage with the world that I saw represented on the news.

As a result, I eagerly read the book. And there I learned that the movie was just a sampling of Richard Adams’ richly rewarding work. Adams’ book is beloved by young and old readers around the world, probably because it has all the magic and excitement of the best fairy tales, while it also draws us into a natural world that’s as detailed, surprising, and dangerous as… well… the natural world. Readers come to believe in the rabbits and that crazy seagull who helps them. As a young reader, I learned to appreciate the value and beauty of creation by concentrating on the plight and peril of these poor creatures in their vast and perilous environment. These were not sentimentalized furballs cavorting about and singing songs. They made no pop culture references, and they didn’t incessantly jabber as if desperate to keep my interest. No… these were characters with the weight of King Arthur and his Knights of the Round Table. And this book deserves to stand on bookshelves alongside The Lord of the Rings, The Once and Future King, Dune, and other works of fantasy that qualify as classic literature.

Watch Watership Down with attentive friends, and you’ll end up discussing many of the book’s themes: humankind’s relationship with the environment; the role of the poet and the prophet in culture; the “necessary evils” of war; the effects of oppression and slavey. The film and its source material are a treasure trove of ideas and excellence. Visually it may not live up to the CGI splendor that we take for granted today, but if you consider that each frame of this film was lovingly handcrafted, you’ll realize how special it really is.

It’s a simple tale, in a way: In a warren of contented, fat, and happy rabbits, a thoughful and conscientious fellow named Hazel (voiced with dignity by John Hurt) finds himself compelled to persuade his friends and neighbors to leave home and set out to start a new warren. He’s drawn to this desperate quest by his friend, the weakling called Fiver who suffers horrific visions that the rabbits’ community will be destroyed by humankind. With the help of a brusque and burly soldier rabbit named Bigwig, Hazel and Fiver persuade a group of their neighbors, and together they flee their warren, leaving behind them most of the community skeptical and laughing at them.

On the road, they encounter a world of dangers, perhaps none more fearsome than other rabbits who have different customs. Hazel, who becomes a reluctant but admirable leader, must face the doubts of his companions, division, and devastating loss. They stumble into one particular warren on the edges of a farm where the rabbits seem happy, but strange. Their food is delivered to them in abundance by a farmer, which seems too good to be true. This spooks a few of Hazel’s gang, and when their suspicions prove true, it is a terrifying revelation indeed.

And that’s only the first half of the journey.

The second half becomes a tense, suspenseful quest to add females to their group, so they can start a new home when they settle into their destination. The only way available to them, it seems, is to steal them from another warren. And fortunately (or perhaps unfortunately) for them, there are some females nearby who desperately need to relocate. Before long, one of them must infiltrate a cruel, military-state warren called Efrafa, and outwit its murderous oppressor, General Woundwort, a villain as memorable and ferocious as Darth Vader. Eventually, the two warrens are at war, Hazel and Bigwig fighting to survive the strength and brutality of Woundwort and his cronies.

As a child, I identified with the vulnerable heroes as they sought to find their place in the world. As a grownup, I am drawn into the mythology that Richard Adams created, the poetry of his language, his appreciation of the power of myth, the compelling dramas that echo historical conflicts in fascist states, and the uncanny knack he has for suspense. A lot of this is effectively preserved in the film, as our heroes attempt to free the enslaved, oppressed females from the regimented society called Efrafa.

The movie suffers only from its own ambition, but any feature-length adaptation of a work this large and complex is bound to fall short. Watership Down is a lengthy novel, and to include everything would make for a cumbersome film. The writers have adapted the book admirably, trimming here and there while maintaining the integrity of the story. As a result, there are some abrupt transitions between chapters, but only fans of the book will notice the bumps. Thankfully, the characters in the film are strong representations of the characters in the novel, and they remain surprisingly distinct and engaging, considering how many of them have big feet and large ears.

In spite of its compression of the narrative, Rosen’s film is exceptional in that it stays relatively true to the strengths and spirit of the novel. It simply tells a story, and tells it beautifully, engagingly, and creatively. It does not compromise, oversimplify, or sentimentalize anything for the sake of “accessibility.” That gives it the advantage over Disney’s entire animated catalogue, in my book. And while it portrays the struggle for survival in rather bleak terms, it also acknowledges that there is more to this world than meets the eye. The film’s contains several sequences of haunting spiritual power, and its closing scene brings me to tears every time.

The animation is strikingly realistic and detailed. I don’t mean photo-realistic, but rather these handpainted images are convincing in that they give us a true sense of rabbit behavior and the nature of the world they inhabit. And in its respect for the grace, color, and natural behavior of the countryside and of rabbits, it is clear the animators knew their subject. This is entirely appropriate. Adams himself was fascinated by the creatures, and wrote an introduction to a book called The Private Life of the Rabbit (a book that my ten-year-old self promptly sought out at the public library after reading Watership Down for the first time).

Angela Morley’s music is a little-known treasure, a compelling adventure soundtrack with memorable themes and a melodic quality that makes it an outstanding work in its own right, more elegant even than the romantic themes of John Williams. Art Garfunkel’s song “Bright Eyes” was recorded for this film, and it provides a stirring accompaniment to Fiver’s meditations on death. (That’s why I get choked up even when I hear it playing in a grocery store.)

And the voices are well chosen. From John Hurt to Deholm Elliot to Zero Mostel, they suit the characters perfectly. Mostel is especially good, bringing attitude and energy to the crucial character of the injured gull, Keehar, who helps the rabbits navigate.

So give your family something meatier than the paper-thin cartoon fare they’re used to. Watership Down is a story that they’ll want to see again — and better, read — for so many reasons.

7 responses to “Review flashback: “Watership Down””