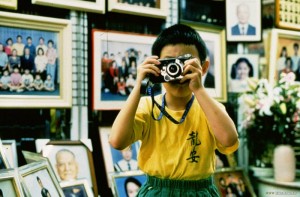 2007 Update: In honor of the recently departed Edward Yang, let me nudge you toward picking up Criterion’s glorious edition of the late filmmaker’s masterful film Yi-Yi (A One and a Two). Here’s a look back at my original response to the film from 2000. I was effusive in my praise then, and were I to rewrite this review, I’d be even more enthusiastic.

Most moviemakers seek to entertain their audience, or to illustrate a lesson of some kind. Occasionally, we’re blessed by the arrival of a different kind of artist… an explorer, someone who invites us to come alongside, consider, and discover things with him. He’s interested in placing new lenses over familiar things and revealing whole new aspects of life we’ve never encountered before. He’s interested in framing questions that will haunt us, rather than serving up answers we already know.

Names like Kieslowski, Bergman, Bresson, and Tarkovsky come to mind.

I go to movies in hopes of being led by someone like that, someone who doesn’t show you all of his cards, someone who will show me something I’ll want to revisit, reconsider, and experience again and again for the rest of my life.

I just found one of those.

Yi Yi (A One and a Two) is the first film by Edward Yang I’ve ever seen. But it only took about five minutes for me to know that this was going to be something very special indeed. One character says, “Movies are lifelike. That is why we like them.” He explains that movies concentrate life to such a potency that we walk away having lived life more than once. Yi Yi proves it, offering us many lives, and a world of truth and discovery. It overwhelms me.

Yi Yi is a slow-moving, painstakingly observant film about about a couple of weeks in the life of a Taiwanese family. It begins with a wedding, proceeds quickly to a birth, and eventually to a funeral, but chronicles many far smaller moments, some so private that even the character experiencing it does not notice its significance. Yet, Yang shows us that all of these moments, from high-stress moments at a hospital bed to forgettable instances like taking a random photograph, moments incidental and ceremonial, are moments of great portent and meaning. Yang shows us a synchronicity that assures us we could return to the story and find great importance in every event, every conversation, every quiet moment that a character spends alone.

There is trouble right off the bat. A wedding is on. But the groom’s elderly mother (called simply “Grandmother”) is distraught. The bride is pregnant. The groom has an angry ex-girlfriend determined to spoil the party. The family is nervous. When Grandmother collapses and ends up comatose, the family is told they must keep her company and watch over her so she will awaken as soon as possible. One by one, they begin their vigils. Each comforter talks to her in soul-searching confessions and questions. These people are normal, marvelous, broken individuals seeking forgiveness, wisdom, love, and grace. Grandmother just lies there, perhaps listening, perhaps absent… provoking in her visitors the same doubts that every honest man or woman encounters at some point during prayer. While Yang’s religious context may not be your own, the truths glimmering here are timeless, universal; I imagine the film will speak to Christian and Buddhist alike.

It is amazing how time flies when you’re concentrating. Two hours can fly by in a movie theatre, or while you’re caught up in a conversation. It’s remarkable that time flies while you’re watching Yi Yi, considering how slowly it moves. It offers no special effects (except subtle camerawork), includes no “action scenes” or onscreen violence or sex. But the intensity of each character’s presence holds your attention, perhaps because it never occurs to you that you are watching an actor. Everything seems so real that it’s a shock when the credits roll and you imagine these actors becoming other folks entirely.

You also wait to be taught lessons, because that’s what dramas do. But Yang just follows his characters, with very sparse musical enhancement or no dramatic flourishes. We are left to think about the consequences of actions, the missed opportunities, the possibility of trouble or triumph in each story. In spite of the foreign context of these stories, I found myself thinking of events in my own life.

Most family epics are downers, tragedies, stories of something organic that slowly unravels. Yang has made this lengthy epic into a story of rebirth, of realization, of curiosity leading to discovery. Can you think of an American epic that inspired you without adding sweetener to the truth? Or one that broke your heart for joy rather than grief? Yang does not focus on making you feel something; he just wants you to see something. He wants to show you characters in their most private moments, their quiet suffering, and how most of them are faced with everyday troubles… and yet his eyes are open so wide that you can see too much that is wonderful for despair to make any sense. By avoiding any unconvincing happy-endings, by embracing joy and doubt and failure and second chances, Yi Yi gives us an undeniably honest picture of life and leaves us strangely encouraged. If ever a movie deserved the title Life is Beautiful, this is it.

Perhaps that is the overarching theme: that life is hard, unfair, and fraught with temptation…but around the corner, grace has wonderful surprises in store. We need only quiet ourselves, slow down, and… look closer. Yi Yi left me with the intense conviction that I should start writing down my life, as carefully and meticulously as I can, so as not to miss the moments of grace flying past me at all times. This, to some extent, must be Yang’s life offered to us in excruciating honesty.

It would take too long to mention all of the stories that wind their way out from that bedside. Here are a few: Min Min (Elaine Jin), the old woman’s daughter, is struggling with a mid-life crisis. Her husband, N.J. (Nien-Jen Wu), is a businessman fighting to maintain his integrity in the midst of his coworkers’ dishonest business practices, and wrestling with regrets about an old flame. Their daughter, the teenager Ting-Ting (Kelly Lee) is a go-between, passing messages from her best friend to a disgruntled young man, even as she falls for the boy herself. Min Min’s brother Ah-Di (Hsi-Sheng Cheng) is an immature oaf who can’t hold on to a buck. His new bride is in a constant catfight with Ah-Di’s ex girlfriend. And little Yang-Yang (Jonathan Chang), my favorite movie character of the year, is learning that grownups won’t answer his questions satisfactorily, so he decides to start figuring life out for himself.

Another critic has noted that these characters are remarkably ordinary, lacking the sensational dysfunctions that make most movie-relationships interesting. Perhaps moviegoers have become so accustomed to watching people with nasty secrets or strange affectations that an ordinary person now seems mysterious, striking, and strange again. Whatever the case, these ordinary people put on a mesmerizing dance of private journeys. No matter how old they are, they still haven’t found what they’re looking for, and life just never goes the way they’d like.

There are echoes of Kieslowski’s films here, whether intended or otherwise. As the adults reminisce about their lives, we see the young people re-living some of these stories for themselves, showing that generational gaps… or gaps between cultures… aren’t so wide after all.

Everyone mirrors or suggests, in some way, someone else. Little Yang-Yang is trying to understand girls, who tease him, abuse him, and are a mystery to him… and his father is trying relate to his wife and his ex. Min Min is frustrated and needs to seek rejuvenation; when her daughter learns about love the hard way, she will need absolution and resurrection. Grace comes to little Yang-Yang through the gift of a camera, to his father through an unlikely friendship with a stranger named Ota (Issey Ogata). Ota turns out to be the film’s most surprising and fascinating character, a Japanese businessman more interested in integrity than business.

In the character of Ota, Yang is showing us a man who knows that there are no hard lines between a person’s private life and their professional life. He is so calm, confident, and cheerful that his presence becomes a warm and wonderful gift to the other characters, and to the audience as well.

In spite of these complex and numerous stories and lives, everything leads back to the child who is learning to see. He is, I can only assume, Edward Yang himself, in a way. Yang-Yang’s watchfulness, timidity, and wonder rhyme with the perspective of the whole film. When he finally opens his mouth, we have seen his thought-processes, his experiments, his adventures, his absolute dead-seriousness about everything. So his words carry immense gravity. Those final moments left me thunderstruck and as deeply moved as any film has ever affected me. Yi Yi accumulates moments of truth and insight slowly, quietly, almost imperceptibly, until it positively glows with importance, like the testimony of a man who has just come down from the mountain with his face glowing, saying, “I have seen something that you have not. Listen to me.”

August 25, 2007 Peter Chattaway on "For The Bible Tells Me So"
Recent Comments
4 Comments | Leave a Comment
Browse Our Archives
Related posts from Looking Closer