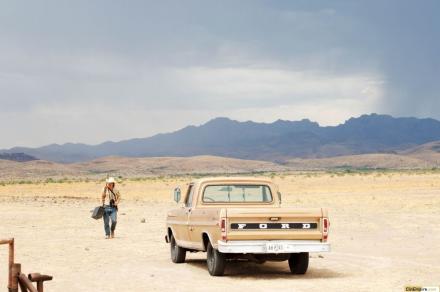 Campbell University’s Kenneth R. Morefield has just seen one of the films I’m most eager to see this autumn.

There is a polished, poetic plainness to some of Cormac McCarthy’s prose in which his admirers might hear echoes of Flannery O’Connor but which usually leaves me exasperated. At its best, the prose can take on the quality of found poetry, intimating at deep truths that inform surface reality and invigorating tired clichés by reminding us of the seeds of truth from which they sprung before withering. At its worst, it can sound like MFA writing — trying a bit too hard to be clever without appearing to be and never more than a page away from some “look at me, I’m writing” moment. Certainly there are passages in “No Country for Old Men” where McCarthy nails with ease the regional plainspoken quality that archetypally defines both the American cowboy and aged veteran who is experienced enough to be wise but not yet so old as to be worn out. At other times, though, he will go to the well once too often, and grate with yet another “I won’t talk about that” to denote a deep hurt or a bantering repetition to underline for the novice reader that, despite the plainness of the dialogue, the idea is important:

“What are you going to do about that? Nothing. That’s what you are going to do.”

These are not verbatim quotes, but they are examples of the sorts of stylistic moves that apparently give McCarthy fans a buzz if not an outright high.

The line between Russian formalist defamiliarization and Seinfeldian banality may not be that thick to begin with, but I like to know which side of it I’m on if I’m going to invest the time and effort to take a novel seriously. And “No Country for Old Men” wants so very desperately, a little too desperately, to be taken seriously. McCarthy’s facility with words goes a long way towards making that preening go down easy, but every now and then (such as with a killer asking “what’s the most you ever won on the flip of a coin?” or in a conflict with a hotel clerk who doesn’t understand the request for an exact price beyond “$14 plus tax”) the author becomes a little too visible in his work for my taste.

One could, I think, rewrite the first two paragraphs of this review by crossing out “Cormac McCarthy” and inserting “the Coen brothers” and substituting “Fargo” (or “O Brother, Where Art Thou”) for “No Country for Old Men.” There is an overly mannered naturalism in these films that borders on (or immigrates to) caricature under the guise of local color. Thus, while some fans of McCarthy no doubt groaned when they heard the Coen brothers were adapting his novel to the big screen, my own response, while not that of an enthusiastic fan of either the source material or the auteurs’ body of work, was “Yes, of course; this makes perfect sense.” Not that I didn’t have worries. Would Tommy Lee Jones’s confident drawl and persona turn the self-effacing Sherriff Bell into a smug, know-it-all in the model of Lieutenant Gerard? Did the casting of Javier Bardeem as Chigurh indicate the film was going to treat the too-psychotic-to-be-interesting killer into a major player in an ensemble piece rather than an antagonist who drives what is essentially a “Terminator” plot?

Since I’ve no doubt offended the two groups most anxious to see the film, let me hasten to say it did work for me, if only just. It turns out I needn’t have worried about Jones who apparently has a deep sense of when an actual performance is needed and when a film allows him to drawl it in—here he correctly discerns that “No Country” falls in the first category and delivers a careful, precise portrait. Even more surprising, Josh Brolin, while a bit quicker than how I pictured Llewelyn Moss, is able to carry the film by getting out of the way long enough to let the material carry itself. No, the problem is definitely Chigurh, and while I think Bardeem will bear the brunt of the criticism for those who don’t like the film, the truth is the assassin with an air rifle is a little too broadly drawn in the novel to blame Bardeem for the disconnect one feels whenever this character takes center stage. Nearly every scene that plays a little too ironically self-aware in the film involves Chigurgh and is pretty faithful to the novel. (Some minor changes make Moss slightly more sympathetic, which is an understandable decision but which robs the ending of some of its philosophical difficulty… to say more would be to risk spoilers.)

Those who want to defend McCarthy’s portrait of Chigurh (and I’m not yet sure I’m not one of them), will point out that a major theme of the novel is about the changing face of society, so it should not be surprising that two of the main characters appear to exist in different films — they live in different worlds. Chigurh is not just a movie cliché, he is a comment about how media shapes our self-conceptions of what is cool to the extent that many of us make ourselves into clichés… or at least strive to. I’m worried that this point will be lost on viewers unfamiliar with McCarthy’s novel, since the sections of first person narration have been reduced to two speeches — one at the beginning and one at the end. While these will hint to attentive viewers who the film is really about, the streamlining of the middle sections to retain faithfulness to the plot will not. Thus the twist towards the end of the film is a little too abrupt, and I fear an audience lulled by the stylized, exaggerated representation of Chigurh into thinking they are watching a movie instead of a filmed novel may be waiting for a final reversal when they should be paying attention to the denouement.

“No Country for Old Men” is a good film—and a serious one. It’s not a great one, though, and I think what holds it back is its lack of trust of its audience to really be willing to dig for and think about the meaning rather than just reflexively putting its hands out to receive a coda to wrap it up. I think—though I’d have to watch the film again to really be sure—that a slight rewrite of the script would have put it over the top. That’s unfortunately not the film I got to interact with. Rather, I think we have a film that uses the complexity of its source material to add a sheen of deeper significance to what is, finally, only a genre film. It’s a good genre film, but I would have rather seen the Coens at least try to make a complex and difficult film from the complex and difficult source material.

My Grades:
For McCarthy fans: B+
For Coen brothers fans: A
For the rest of us: B

September 11, 2007
Auralia on the Over the Rhine Tour Bus
Next Post