This review was originally published in an abridged edition at Christianity Today.

In Roman Polanski’s Chinatown, detective Jake Gittes became suspicious of a devious California millionaire named Noah Cross, played by the great John Huston. Dazzled by Cross’s fortune, which he’d acquired through laying irrigation pipelines across Los Angeles, Gittes asked why such a rich man would want to get richer. “How much better can you eat? What can you buy that you can’t already afford?”

Cross’s answer was simple: “The future.”

That answer would probably make sense to the central character of Paul Thomas Anderson’s film There Will Be Blood — Daniel Plainview. Plainview makes his fortune tapping into “an ocean of oil” under his feet, driven by insatiable ambition. And soon, he’s putting in a pipeline of his own.

As Plainview tries to buy up land for drilling and put in a pipeline of his own, he consults a real estate expert about the area surrounding Little Boston, California. He points to a map a specific spot on the map, and the expert nods: “That can be got, I’m sure.” Plainview, his ravenous appetite growing with everything he consumes, asks, “Can everything around here be got?”

Curiously, it’s not just greed and pipelines that Blood‘s Plainview and Chinatown’s Cross have in common. It’s the voice. Played with monstrous energy and complexity by Daniel Day-Lewis, Plainview seems possessed by the same evil spirit, rasping each line as if his throat is a chimney. He’s the kind of guy who probably drinks coffee straight from the pot and then swallows the coffee grounds.

When we first meet Plainview, he’s mining for silver. Hunting for something beautiful, he emerges with something darker, something flammable, something that stains. He calls it “gold.” And barrel by barrel, he builds a hellish heaven of his own. With every achievement, he squelches the sparks of his dying conscience.

Most of the time, Plainview glad-hands like a campaigning politician. Calling himself himself a “family man,” he assures his target communities that he prefers “plain speaking,” that he happens to “enjoy all faiths,” and that “the children are our future” (of course). He even passes off H.W. (Dillon Freasier) — the orphan of a driller killed in the line of duty — as his own cute-as-a-button boy, so that he can seduce the Little Boston locals.

But in a rare moment of honesty, Plainview admits, “There is a competition in me. I want no one else to succeed.” Like the oil saturating the ground, his hatred rests on the surface, twisting his smile and his speech. But it takes 158 minutes to plumb the depths of the reservoir beneath his hard façade. Suppressed rage blasts to the surface if Plainview perceives anyone’s judgment, or if his failures and weaknesses are exposed. 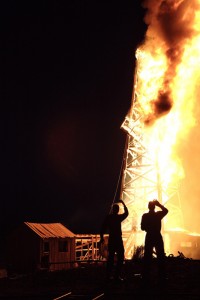 Throughout the film, oil is a metaphor for blood. In a moment of unsettling and almost ceremonial reverence, a man smears oil on a baby’s forehead. And when young Paul Sunday pays Plainview a surprise visit to reveal the secret of his family’s ranch in Little Boston — the future home of Los Angeles — Plainview hurries off like an oil-thirsty vampire, all but baring his fangs.

But Little Boston is not easy ground to break.

There Will Be Blood’s title might be a reference to oil. It could also be a line from one of the euphoric (and perhaps even demonic) sermons performed by Eli Sunday — the preacher at Little Boston’s Church of the Third Revelation.

Played with riveting confidence by Paul Dano (Little Miss Sunshine), Sunday compels confessions and conversions like a rig pumping oil. He’s a charismatic minister, twisting traditional Christian terminology into incantations and manipulation. Claiming to cast out an evil spirit, he advances toward the camera, shrieking and spitting his words, scarier than any demon. He’s a holy-roller version of the chauvinistic motivational speaker played by Tom Cruise in Anderson’s Magnolia.

Some might find Dano’s performance a joke, wondering what congregations would sit still for such histrionics. But it’s not hard to find other examples of misguided, seduced congregations — on YouTube, cable TV, or in classic American literature. Further, Sunday’s Church of the Third Revelation seems more like a cult, driven by Sunday’s personality and mid-sermon “miracles” than by the Gospel. Anderson’s movie is not a condemnation of Christian faith. It’s consistent with Christ’s teaching about the nature of ego and greed. Moreover, Sunday’s little sister — tellingly named “Mary” — is a faint figure of grace at the edge of the frame. (And before all is said and done, we will see a prominent character finding refuge and a new start in a church.) 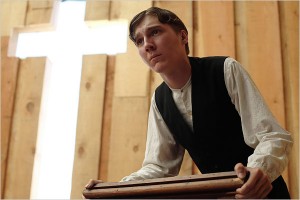 Sunday infuriates Plainview. The oil man probably recognizes his own deceitful tactics manifested in this man of the cloth. And he knows he’ll win this community’s trust only if he makes some kind of tenuous bargain with this evangelist.

When industry holds hands with religion, there’s more arm-wrestling than affection. The marriage of Christianity and capitalism is easily corrupted. Businessmen exalt themselves by squeezing precious resources, even their children, for the sake of money, just as evangelicals can succumb to ego and self-righteousness in their zeal to save souls.

When Plainview himself accepts Jesus Christ — or goes through the motions in order to win the congregation’s approval — Sunday gives him a public beating until Plainview roars “I want the blood!” We’re not sure if he’s demanding Christ’s blood for salvation… or Sunday’s blood in revenge for this humiliation.

The film’s title is also a promise from Anderson that all of this evildoing is going to end badly. When oil erupts in a volcanic pillar of fire — the most spectacular sight at the movies this year — we suspect that this will be followed by an equivalent eruption of Plainview’s own hatred for “these people.” Plainview cannot conceive of a relationship outside the framework of control or competition. He wants to be alone at the top. 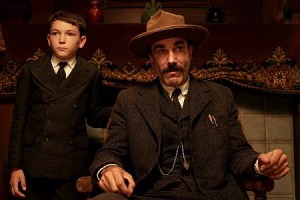 There’s a biblical simplicity to these events, as brother turns against brother, father betrays son, and son strikes back at father. Eventually, Plainview’s guilt about his crimes against a brother and a son leads to something other than repentance. He wants to turn one of heaven’s “sons” against the Almighty himself.

These symmetries emphasize one of the film’s central themes: How we treat our brothers, sons, and fathers will define us. Heaven is a grace-filled community, and hell is isolation and the absence of love. If there were categories in the video stores called “The Wages of Sin” or “The Nature of Evil,” this film could fit perfectly in either section.

Day-Lewis has finally found a film where he can unleash his full potential without overwhelming the scenery. Plainview’s as volcanic and arrogant as any big screen character portrayed by DeNiro, Pacino, Brando, or even Orson Welles. And yet, if Day-Lewis’s performance resembles anything that’s come before, it’s his own “Bill the Butcher” from Martin Scorsese’s Gangs of New York.

But there’s more to this movie than Lewis’s extraordinary performance. In fact, the film is an even greater show of Paul Thomas Anderson’s talent.

Since then, he worked as assistant to one of his heroes, Robert Altman, on the set of A Prairie Home Companion. He must have learned some new tricks. The patience that Anderson demonstrates, trusting Day-Lewis and Dano to dig deep and find moments of spontaneous genius — that’s pure Altman. Ladies and gentlemen, the torch has been passed.

But nothing could have prepared us for this: There Will Be Blood is already being hailed as a masterpiece. While it’s dedicated to Altman, and based on a 1927 novel by Upton Sinclair called Oil!, Blood feels more like a collaborative effort from Stanley Kubrick, Terrence Malick, Peter Weir, and Francis Ford Coppola. And the film’s bizarre finale is 100% Anderson — a plunge into the unexpected that will bewilder and divide viewers. Decades from now, when cinephiles look back at 2007, this is probably the movie they’ll still passionately debate.

Like Kubrick’s 2001: A Space Odyssey, Blood boasts a brilliant musical score by Radiohead’s guitarist Johnny Greenwood in which dissonant waves of strings seem to shriek and groan like plate tectonics.

Gloriously photographed by Anderson’s faithful cinematographer Roger Elswitt, the film is full of visual metaphors that suggest Anderson has been studying Terrence Malick. Young Mary Sunday might have walked right out of Days of Heaven, and like that film, Blood’s centerpiece sequence features a glorious, terrifying conflagration.

Anderson’s interest in landscape as metaphor recalls the films of Peter Weir, who explored the spiritual implications of wilderness landscapes in Picnic at Hanging Rock, The Last Wave, and The Mosquito Coast.

Echoes of Coppola’s Godfather trilogy are everywhere, but the film’s culmination contains an echo of General Kurtz’s moment of self-realization at the end of Apocalypse Now. Where Kurtz gasped “The horror!”, comprehending his depravity, Plainview makes an ecstatic announcement — a mocking distortion of Christ’s own “last words.” And by way of bitter irony, he’s telling the truth.

There Will Be Blood may as well have been called Heart of Darkness.