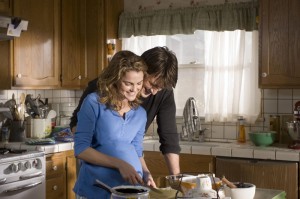 Fans of Firefly and Serenity, don’t despair. The charismatic Nathan Fillion may have a bright big-screen future ahead of him.

In Waitress, Fillion is fantastic as Dr. Pomatter, the amorous doctor who comes to the rescue when a pregnant and perturbed young beauty named Jenna, played by Keri Russell, finds herself in a nightmare marriage.

But there’s a problem. Both Jenna and her good doctor are married — Jenna to a hard-hearted, self-absorbed monster called Earl (Jeremy Sisto), and Pomatter to… well, that’s a mystery until the film’s closing scenes.

What are these two lovebirds going to do? Most Hollywood storytellers would shrug and say, “What do you mean? They’ll leave their marriages, of course! And they’ll follow their hearts!”

But that’s not good enough for actress/writer/director Adrienne Shelley, who gives us a more complicated, realistic, and insightful portrayal. While she does not for a moment ignore the allure of extramarital affairs, Shelley is also mature enough to know that divorce is often just a flight from the hard work of love, a run from one set of troubles to another.

Don’t worry — the conclusion is satisfying and even a little surprising. And all 104 minutes of this smart, engaging comedy are full of sweetness and heart, like blueberries packed in a fresh blueberry pie. Russell proves a delightful leading lady. Her supporting cast delivers an array of colorful characters. And Andy Griffith… yes, that Andy Griffith, almost steals the show.

Did I mention the pie? Russell plays a pie-making genius, and Shelley makes sure that we’re treated to eyefuls of pie… more varieties of pie than you knew were possible. There’s just no choice about what to do after the movie is over — get out there, find your favorite pie shop, and indulge.

Jenna’s bone-headed husband may have plenty of real-world clones, but in this movie he’s just a little too simple, a little too easy to hate. And we’re never given much of a clue about why Jenna ever married Earl in the first place. (I mean, Jenna does bear some of the responsibility for the mess she’s in, yes?)

Further, well… Shelley will be remembered for her humor and her characters, but probably not for how her films look. Matthew Irving’s cinematography is… functional.

But it’s tough to be tough on Waitress. I became a fan of this filmmaker watching Hal Hartley’s fantastic comedy The Unbelievable Truth, in which Shelley had the lead role. Waitress is her third and final directorial effort. She was murdered before the film was released. That fact makes makes viewing this warm, thoughtful, occasionally hilarious romantic comedy a rather bittersweet experience.

But let’s be grateful and celebrate Shelley’s style, sense of humor, and storytelling. Her radiant spirit shines through this movie.