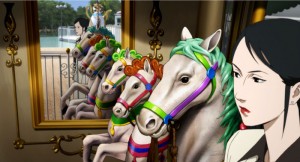 This brief review of Paprika was originally published in Risen magazine.

In 2001, Hayao Miyazake’s Spirited Away won the Best Animated Feature Oscar, and introduced the glory of Japanese animation to a much larger American audience.

Unfortunately, some of Japan’s most extraordinary animators are still relatively unknown in the U.S. You probably haven’t heard of Satoshi Kon. And thus you’ve probably missed Paprika, which isn’t just the most imaginative animated film of last year — it’s one of the best science fiction films of the decade.

We follow a Japanese research psychotherapist named Dr. Atsuko Chiba who, by night, adventures into her patients’ dreams using a high-tech innovation called a DC Mini. As she enters these virtual realities, she takes on the name “Paprika.” And when terrorists nab DC Minis so they can invade other people’s dreams. Paprika goes dream-diving to track down the true identities of the crooks. And we’re taken on an exhilarating ride through kaleidoscopic imagery.

For all of the laughs and surprises in his film, Satoshi Kon explores frightening possibilities. He suggests there is a sort of stealth warfare occurring, as we watch a parade of American icons advance down the avenues of a Japanese imagination. While our sexy heroine strives to make sense of dreams, others merely indulge in them, and we’re left to ponder how movies, pop-culture, and other art forms can be used to shape the thoughts of naïve, impulsive people. But the film is not a condemnation of imagination — the characters end up fighting for their dreams, defending them against those who would manipulate them.

Yes, it’s a cartoon… but Paprika is a rewarding, entertaining, and sometimes terrifying movie for discerning adults. Check out the new DVD release.

January 19, 2008
Saturdays are Better with a Dash of Flannery O'Connor
Next Post