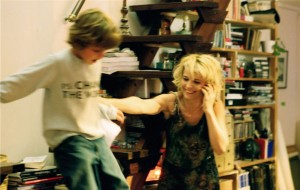 An abridged version of this review was published today at Christianity Today Movies.

Watching Hou Hsiao-Hsien’s new film Flight of the Red Balloon, there are many possible answers to that question.

We watch seven-year-old Simon meander along Paris sidewalks, and his progress is as lazy and jaunty as the path of that red balloon above him. His lackadaisical stride stands in stark contrast to the crisscrossing streets and tracks that bind the city; he’s not yet imprisoned by the grid-like adult world of hurry and hustle. Under his mop of touseled red hair, his eyes cartoon-wide, this kid has sails open to catch a whim. He’ll even shout up at the balloon to come down and play with him.

The actor, Simon Iteanu, is a joy to watch. Like Jonathan Chang in Edward Yang’s Yi yi, and unlike so many American child actors, Iteanu is one of those rare kids who is utterly convincing and seemingly oblivious to the camera, content to be quiet and thoughtful. He’s the opposite of Dakota Fanning. He captures something essential about a child’s private, emotional, everyday experience.

We know that the weightlessness of Simon’s existence, the whimsy in his wonder, will soon end. It’s already ending. We sense it when he refuses to welcome the balloon as it finally descends. We see it in how he’s drawn to flashy, mechanized activity, like his sister’s PlayStation back home.

Flight’s bittersweet tone comes from its focus on childhood, and even a quality of childhood that the harsh city life might soon burst like a balloon. You could call it The Unbearable Lightness of Being, but that title’s taken.

And speaking of Unbearable Lightness…

In a visceral, spirited performance that rates among her very best, Juliette Binoche plays Simon’s frazzled, single mother, Suzanne. With her energy manifested in an electrified blonde hairdo that has to be seen to be believed, Suzanne is too busy to know whether she’s coming or going. In an unforgettable and surprising reveal, we learn that Suzanne works as an actress in a puppet theater. Like Hou himself, she’s translating timeless Chinese art for present-day Parisians, and the work unleashes a playful expressiveness that makes her irresistible.

But between rehearsals, Suzanne careens from one activity to another — like a pinball batted about in a machine. She’s trying to cope with intrusive downstairs tenants, the loneliness of missing her absent husband and faraway daughter, and the details of welcoming Simon’s new nanny. Coming home, she gets updates from Simon about his day. “You play pinball these days?” she quips, and the line is loaded. Yes, his life is going on without her. Yes, he’s being drawn into the machine.

We enter into Suzanne’s crazy world through the quiet observance of the new nanny, a Chinese film student named Song (Song Fang). Song’s peaceful acceptance of Suzanne’s crazy world makes her most appealing. We watch and learn with her. Song’s Chinese background, her interest in film, her everpresent digital camera which she uses to film Simon’s everyday experiences, make her the calm at the center of this family’s storm. She’s making a short film about red balloons in tribute to the classic 1956 French short film, The Red Balloon, just as Hou made Flight as an homage to its Albert Lamorisse.

Hou’s cinematography imitates the casual curiosity of a child. His gaze wanders up and down the street, up and down the buildings. But don’t be fooled — every one of his long, patient takes is carefully composed.

If you watch carefully, you’ll catch visual jokes and wonder if they’re intentional. For example, in the opening shot of a balloon floating away on a cut string, we see a subway sign advertising the film Severance. If that isn’t funny enough, the title is bisected by a lamp post! Later, after we’ve realized that the film is about a vulnerable child overlooked by the busy modern world, a bus passes with a bold poster for the film Children of Men, with Clive Owen’s mug staring straight at us. Accident? If so, a very happy one.

Hou’s curiosity gives his imagery a hypnotic quality. The modern city, which inspires cynicism in many artists, is a playground for Hou as he seizes possibilities. Looking through a train window at a beautiful cloudscape, we suddenly notice that the same scene has beamed through the window, struck something behind the camera, and bounced back to be projected like a small-screen movie on that very same window. We’re watching the “real” sunset and a reproduction of it in the same frame. It’s a dazzling moment. Krzysztof Kieslowksi would have loved it.

But they’re not just pretty pictures. Hou’s images are rich with meaning for the discerning viewer. In many shots, reflections suggest that we consider the past, present, and future. Some shots show passing traffic, but reflections in windows and doors let us see vehicles approach, and after they pass, we catch distorted views of their continuing journey. (How he manages to keep the camera out of reflections is a special effect indeed.) Hou is constantly, quietly reminding us that the past and future are active in the present, and that should provoke questions about what we value, and how we inhabit a moment.

The story’s most obvious theme is the elusiveness of the joys and wonders we associate with childhood. Suzanne and Simon are both saddened by a longing for younger, more innocent days. They miss Simon’s father and sister—he’s away in Montreal, she’s with her grandfather. In a heartbreaking moment, Suzanne pleads with her daughter to return home. She reveres home movies of her children, and the most precious gift she can give is an old postcard from her scrapbook.

In a beautiful scene, Simon wanders into a video arcade. Song stays outside, filming his progress through the window. Hou’s camera turns to zoom in on Simon, wide-eyed at a pinball machine. (How odd that he’s drawn to pinball—a small sphere, making progress through a series of hard-hitting obstacles.) We watch Simon through the glass, and notice that Song has gone inside to join him, her camera still running. It’s like Hou is suggesting that, through the gift of pictures, postcards, and film, we can transcend the clamor of our lives and recapture some of our childlike wonder again. Song bridges the gap, quietly savoring the world around her. Camera in hand, she manages to maintain a sense of childlike wonder.

While the force that threatens Simon’s innocence is adulthood, Hou is careful not to villianize adults. In fact, the most “villainous” characters are Suzanne’s downstairs tenants who refuse to grow up and take responsibility for rent bills. Suzanne, crazymaking as she is, is still endearing for the passionate love she has for her son. That love is mirrored in her fairy-tale puppet show; the hero declares, “I will boil the ocean dry to find and rescue my beloved.”

Following Song, Suzanne, and Simon, Hou invites viewers along for a dreamy stroll through a day in their lives with a “you are there” immediacy. Hou allowed his actors to improvise, without rehearsals, and as a result the film has a delightful spontaneity. Binoche even wore clothes from her own closet. (And it must be said—she has a very nice closet.)

Nevertheless, Flight has already inspired some impatient critics to complain that “nothing happens” in this film. To borrow a line from James Cameron’s The Abyss — they “need to look with better eyes than that.”

Flight is not plot-driven. It is not about drawing us to the edge of our seat or teasing us with what happens next. It’s meant to be observed the way you might study art in a museum, or the way you might wander down a street in one of the world’s great cities just to watch people and light.

Sound boring? Give it a try. Find out why Hou is one of the world’s most celebrated filmmakers, and what Americans have been missing. The fact that his films aren’t “marketable” in the U.S. reflects poorly on us, not Hou.

Flight will probably stand as his most playful work. The red balloon is an evocative icon that appeals to all ages. It’s the suggestion that the simple joy of childhood can be lost so easily. It’s also the gravity of that idea — that there’s a lonely but buoyant spirit wandering above us, watching over us, waiting for us to reach up. The balloon’s as mysterious and benevolent a character as Winnie the Pooh or Hayao Miyazake’s Totoro. After we watch it a while, we start to notice bright red spheres and circles everywhere — in decals on bus windows, bright red stop lights, traffic signs, and the taillights of the car in front of Suzanne’s while she drives through a tunnel.

In one moment, the balloon descends the side of a building and passes a painting of a red balloon, and suddenly it brushes against the painting as if kissing a stranger in the Parisian way, or finding a kindred spirit. It’s a moment that can make a theater full of enthralled viewers gasp.

Hou’s film is the first in a program financed by the Musée d’Orsay. The film features a scene inside the museum where children consider a painting of, yes, a red balloon. Hou’s film has set the standard for the series. We can only hope the rest of the participating filmmakers dare to reach so high.

April 2, 2008
Sam Phillips' "Don't Do Anything" Does Not Disappoint
Next Post