Harry Potter and the Prisoner of Azkaban (2004) 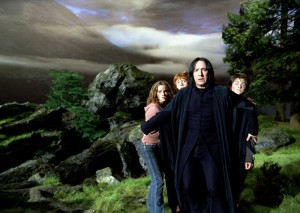 Thanks to director Alfonso Cuarón and his dream-team of British actors, Harry Potter and the Prisoner of Azkaban may mark the first time that the third film in a trilogy has been the best. But thanks to storyteller J.K. Rowling, the derivative plot lacks depth and suspense.

Cuarón is clearly a great choice for the film, bringing with him the talent that made his 1995 film A Little Princess one of the best fairy tales ever filmed. He’s got a knack for fantasy. Contrary to the typical Disney sanitization, he allows for the possibility of things to go very wrong, and he’s not afraid to let mysteries remain mysterious or dark possibilities remain threatening. Thus, his Potter film is more resonant than the cartoonish, methodical quality of the first two.

Azkaban is richer, more complex, with better performances from its leads. It boasts John Williams’ best musical contribution to the franchise. It’s also loaded with dazzling special effects that will make the first two films look like cheap made-for-TV affairs.

Most impressively, it features a cast more dazzling than any we’re likely to see for a while. Cuarón brings back the spunky Emma Watson as Hermione Granger, of course. And while her presence helps make up for Daniel Radcliffe’s unmemorable Harry and Rupert Gint’s tiresomely oafish Ron, her increasing ability to steal scenes and enchant the audience may eventually become a real problem for this series. If the Potter franchise is remembered for launching any big stars, I have little doubt that she’s the one who will shine brightest in the long term.

Cuarón is also fortunate to have Michael Gambon (Gosford Park, The Insider) step into the shoes of Richard Harris’s Albus Dumbledore. Thus, Dumbledore’s a rougher, gruffer, more interesting mentor for the children. There’s also Alan Rickman as the sour-tempered Snape and Maggie Smith as Professor McGonagall.

But then, Cuarón reveals the new Defense Against the Dark Arts teacher. Replacing the flamboyant Kenneth Branagh in the job is-could it be?-David Thewlis as Professor Lupin! Thewlis, who set fire to the screen with his galvanizing performance in Mike Leigh’s Naked, is an inspired choice. He seems more at ease in this environment than any of the cast so far. He doesn’t make Lupin a cartoon or a caricature — he’s funny, likeable, mysterious, and unpredictable. Lupin starts out training the young wizards to overcome their fears. Later, he gives them reason to fear him. Lupin’s complexity makes him the most interesting character in the franchise thus far.

But wait, there’s more. How about Emma Thompson as Professor of Divination Sibyll Trelawney, with glasses that magnify her eyes so they no longer fit her head, and a near-sightedness that messes with her visions of the future? Fantastic. Musing over tea leaves with tremulous melodrama, she’s a supernatural flibbertigibbet.

Then, as if showing off, Cuarón pulls off a greater trick. He pulls the long-missing Gary Oldman out of a hat, playing the shadowy figure of the title-an escaped prisoner called Sirius Black. Black has troubling connections to the murder of Harry Potter’s parents, and now he seems to have his deadly arts aimed at Harry. When Oldman finally surfaces (disappointingly late in the show), he’s not at all what his ‘WANTED’ poster has led us to expect. He’s, well, Gary Oldman-which means he’s a character we’ve never seen before: complicated, emotional, and full of surprises.

There will be few screen pleasures this year as delightful as seeing Rickman, Thewlis, and Oldman onscreen at the same time, suddenly joined by yet another superlative British talent-Timothy Spall. It’s enough to make one wonder if Mike Leigh didn’t serve as the film’s casting agent. In fact, it makes one a bit sad that it had to be this film that united them. Perhaps seeing three of his former cast members together will inspire Leigh, or someone, to reunite them for something substantial.

Like Leigh’s brilliant line of dusty, gritty British films, Cuarón’s trip to Rowling’s world feels distinctly English. Cinematographer Michael Seresin achieves a naturalism that was lacking in the first two, making Harry’s world much more “lived-in” and convincing. The costumes look lived-in as well, thanks to designer Jany Temime. Stuart Craig’s brilliant production design gives shadows and history to Hogwarts halls. His gallery of moving paintings becomes something awe-inspiring instead of merely clever. Tim Burke and Roger Guyett’s visual effects are masterful, making the Hippogriff-an eagle/horse hybrid-an enchanting and lifelike achievement. It strikes me as rather sad that CGI animation is so frequently used to create the stuff of our nightmares, and so rarely used to invent something beautiful. The Hippogriff soars, buoyed by John Williams’ score, a restrained and evocative composition more along the lines of his Catch Me If You Can score than the trademark Williams fanfare of the first two.

You’ll notice I’m not saying much about the plot. That’s because it’s the least interesting aspect of the film. Cuarón has everything he needs for a spectacularly entertaining and exciting fantasy except a suspenseful story. He scares up some goosebumps with a nasty variation on Tolkien’s Black Riders, floating black phantoms called Dementors. But otherwise, this is the same plot that carried us through the first two.

Once again, Steve Kloves’ failing is not to invest Rowling’s story with more heart, more worth caring about. Sure, if he strayed far from her plot, he’d incur the wrath of a zillion fans. But alas, he’s thus bound to repeating an unsensational story. The series is thus becoming redundant, predictable, and formulaic.

Here’s the formula: Harry begins at the Dursleys, abusing his powers at their expense, for his own amusement. (Ahh, what a role model. Nothing like humiliating a relative to show your budding skills for leadership.) He goes to school, defies authority again and breaks even more rules, gets bullied by other students who also break rules (albeit with a sneer), discovers that his teachers are clueless (again), breaks more rules in order to take care of things on his own, comes face to face with the latest enemy, discovers that he was completely wrong about the enemy’s identity, and then humbles everyone by exposing the truth for all to see. What a moral: Crime pays.

Worse, Rowling’s story collapses in the last act, spoiling the spooky mood of the film’s first 90 minutes by trying to pull the rug out from under us. Just as in the first two films, there must be a last-minute revelation in which exposition is poured over our heads to explain what is really going on. This doesn’t seem fair to the audience. The film gave us no indication that we should be looking for clues to solve a mystery, and yet the conclusion behaves as if it has accomplished a brilliant bait-and-switch.

But the thing that bothers me most about this episode in the Potter series is the way that it continues to drain any kind of suspense from Harry’s adventures by giving the magicians every variety of spell that they need just when they need it, even though those spells have never been mentioned before.

I groaned aloud when Hermione, who once again proves the smartest and most interesting of the young personalities, pulled a trick out of her hat in the last chapter–a trick that could save the day. Why didn’t any of the wizards ever propose using this trick before? Had they considered it in the previous two films, they could have prevented a world of trouble for many of the characters. In fact, if they would use the trick even now, at the end of episode three, they could clean up a great deal of the distress and disorder going on at Hogwarts.

Plot problems like this will continue to make Potter chapters as expendable as episodes of most sci-fi television shows. When trials come up, there will always be a technological tool, or a magic trick, that will save everyone at the last minute. Magic is thus robbed of its symbolic potential and becomes merely a toolbox of technological devices.

With all of its recurring focus on young boys having trouble with their wands, and with the slightly changing dynamic in the relationship between Ron and Hermione, the story is a not-so-subtle drama about coming of age. But it finds nothing interesting to suggest about growing up, except that we must face our fears, blah blah blah. It’s far too distracted with tricks and overcrowded with characters who must each make at least one appearance or risk offending the fans. Potentially powerful characters like Professor Snape are reduced to a few scowling cameos. Poor Maggie Smith gets all dressed up and has not but a line or two. When all is said and done, The Prisoner of Azkaban is at heart most concerned about distracting us with red herrings until the arrival a finale that’s only surprising because it is arbitrary.

Themes? Acts of sacrifice? Love? No. Potter and Company operate on the principle that all authority is naïve, and that if you want something, you make it happen your own way, no matter how many rules you have to break to get it done. No need to appeal to the wisdom of your elders. Just charge ahead blindly, trusting in your own immature understanding, and the Good Witch Rowling will be there to toss you another trick when you need it.

The next episode will be directed by Mike Newell, who proven his own brilliance with fairy tales in the Irish adventure Into the West. Perhaps he can cast a spell that transforms more than style and technique, elevating story as well. 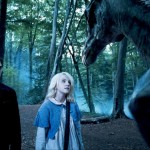 November 25, 2008 The Lord of the Rings: The Two Towers (2002)
Browse Our Archives
Related posts from Looking Closer