When filmmakers journey to the American South, they enter dangerous territory. Far too often, they aren’t prepared to encounter such a rich, unusual culture, and they end up painting cruel caricatures.

So it is a bit unnerving when director Phil Morrison takes us on a road trip from Chicago art studios to North Carolina baby showers in Junebug. Is this going to be just another movie exploiting Southern eccentricity for our entertainment?

Not at all. Junebug is, at times, hilarious, but it is also a deeply affecting drama about a complicated family that finds meaning, hope, and healing in Christian faith and traditional family values. We haven’t seen such a thoughtful illustration of religious faith since Robert Duvall’s The Apostle. Nor have we seen many performances as indelibly endearing as the one delivered here by Amy Adams.

But wait, I’m getting ahead of myself.

The film begins as a sophisticated New York art dealer named Madeleine (Embeth Davidtz of Schindler’s List) falls in love with a North Carolina boy named George (Alessandro Nivola). Pursuing a contract with a reclusive artist, she ends up staying with George’s family, and the ensuing culture clash progresses from comical to devastating. Madeline, who considers herself professional, stylish, and superior, is humbled to discover the emptiness of her own routine, and the rich resources to be found in family and faith.

Madeline learns a lot from George himself, as he springs into action to help his family in crisis; from his imperious mother Peg; his quiet, patient father Eugene; and even from his troubled, jittery brother Johnny.

But most of her lessons come from Johnny’s very pregnant wife Ashley (Adams). Ashley is the intellectual equivalent of an eight-year-old, but her longings, her love, and her optimism overcome anything in her path, even Madeline’s sophisticated skepticism.

From the pregnant silences (no pun intended) at the dinner table, to the nuances of Baptist-churchgoer vocabulary, to “colorful” displays of Southern imagination, these people are three-dimensional and compelling, enlivened by an artist of affection and vision. The slow pace, the quiet moments, the empty spaces — they allow us to absorb some of the haunting history, the pain, and the power of this place. 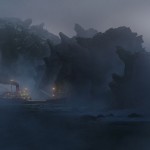