At the movies, transformations are the norm. Men become monsters and beasts are transformed by beauties on a regular basis. The formula is so familiar that storytellers and artists face a tremendous challenge if they hope to capture audiences with a sense of something new.

Remember Schindler’s List? In Steven Spielberg’s beloved Holocaust film, we watched Oskar Schindler begin to question himself and his superiors. He gradually mustered the courage to take a small step in the right direction. And yet, I still feel that Spielberg’s film went too far, celebrating a man’s redemption with a climactic fireworks display of emotion. Scenes like that prevent us from thinking about the journey; we’re instead commanded to feel, feel, feel!

The Lives of Others is an example of a transformation tale done right, portraying the awakening of conscience in the heart of a “dead man” through incremental progress that feels true to life. Damascus-road encounters do happen, but they are extremely difficult to portray. Most of us experience change in stages, through a long sequence of events. How do you illustrate an event so shattering that it changes a man, heart and soul, in a moment?

The villain in question does things that the audience will find repulsive, and yet there is a glimmer of hope for him in moments of hesitation, in expressions that suggest a void or a need in his heart. And the movie pulls this off without overbearing sentimentality, without working too hard to please the crowd.

The Live of Others is about a monster named Gerard Wiesler (Ulrich Mühe) who lurks in East Germany, working as a surveillance officer for the Stasi forces during the mid-1980s. When Wiesler is appointed to monitor every move and every conversation in the apartment of a writer who may have anti-socialist sentiments, he finds that it’s not quite so easy to resist the allure of their convictions.

Like Hamlet’s wretched uncle forced to watch a play that reveals his own wickedness, Wiesler begins to realize the darkness of his own empty life. Starved for light, he begins to long for the freedom and virtue that his targets fight to defend. Ultimately, he cannot live with the fact that his actions might crush the very thing he secretly cherishes.

“The play’s the thing to catch the conscience of the surveillance officer,” except that in this case “the play” is not a charade. The play is the true-life interaction of good men and women, which goes on daily while he watches from the shadows. As he begins to understand the consequences of his actions, his frozen heart begins to crack and melt within him.

In that sense, the film is about the divide between government and “the common people,” and how those who live insulated by walls of power and privilege may fall victim to delusions about the rest of the world. In order for balance to be restored, this officer must come out from behind his shields of suspicion and condemnation, and he must reckon with how the people of East Berlin truly. When he does, it isn’t so easy to persecute them. (As Wiesler struggles, I imagined Damiel, the guardian angel assigned to Berlin in Wim Wenders’ Wings of Desire, whispering in his ear to cultivate his conscience.)

The film is also a fine testament to the power of art. As these government agents seek to ensnare the playwright before he delivers any truly subversive work, it is clear that they are driven by fear. But fear such as theirs grows from insecurity, from the knowledge that the truth will not support them in the end, whether they admit it to themselves or not.

As Wiesler, Ulrich Mühe is fascinating. As he listens to the secrets of a playwright named Georg Dreyman (Sebastian Koch), his actress girlfriend Christa-Maria Sieland (Martina Gedeck), and their conspiratorial friends, his face is like a death mask, reminding me of our first glimpses of Hannibal Lecter in The Silence of the Lambs. But Wiesler isn’t nearly so frightening; the film does not seek to impress us with his influence so much as to communicate his feebleness, his suppressed longing for freedom, his emptiness. Hagen Bogndanski’s cinematography is modest and sufficiently moody.

The Lives of Others is being interpreted by some as a timely commentary on the endangerment of citizens’ rights in America. I suppose you can read it that way, if you really want to try and compare the oppressed Berlin to, oh, Seattle, where I doubt many playwrights have found taps on their telephone lines.

But this is not primarily a political film. Director Florian Henckel von Donnersmarck is investigating matters of the heart. Can a human being have a change of heart? Can a selfish man learn to be selfless? If so, what brings that about? And where does such a reversal lead him? The answer is clear. But The Lives of Others illustrates it with only a dash of sentimentality, so that we have to face, along with Weisler, the truth that integrity leads to vulnerability and sacrifice.

The film’s only misstep is its closing scene, which feels somewhat contrived. If it had ended just a few moments earlier, we would have been left with a tantalizing question mark, which is always more haunting than an exclamation point.

I loved The Lives of Others. I hope you get to see it … before Sydney Pollack and Anthony Minghella deliver their completely unnecessary American remake, which I suspect will appeal to our emotions more than this admirably restrained piece of work.

As I watched Wiesler listen to his headphones, surrounded by the instruments of voyeurism, I thought of our own media-saturated culture, and how much of my own time I spend spying on “the lives of others” through film and television and news media. Am I attending as closely as Wiesler? If so, what am I looking for? Am I merely entertained? Am I open to seeing the truth and being transformed?

November 19, 2008
The Passion of the Christ - A Letter to Christians about Mel Gibson's Film
Next Post 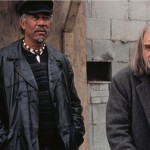 November 24, 2008 The Hard Work of "Levity": A Conversation with Director Ed Solomon
Browse Our Archives
Related posts from Looking Closer