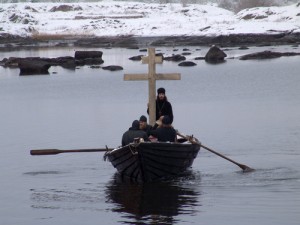 This review was previously published as an installment of Jeffrey Overstreet’s “Through a Screen Darkly” column at Christianity Today.

A certain hunger sets in after film critics have spent the summer chasing down all of the big-budget action movies and sophomoric comedies.

This summer was no exception. We thrilled to the latest special effects (Iron Man), laughed at flashes of inspired audacity (Tropic Thunder), and threw out the trash (Space Chimps, Fly Me to the Moon, The House Bunny). And we rejoiced over a couple of blockbusters that proved to be unexpectedly meaningful (The Dark Knight and WALL•E).

But between May and August, our big-screen treasure hunt feels more like a search for needles in a field of haystacks. The promise of autumn turns our attention to movies whose names might be inscribed on Oscars instead of on Happy Meal toys. And yet even there, it’s a challenge to find films that will last, movies that minister not only to the senses and the intellect but also to the heart.

I just found one of those films, a new favorite that’s inspired me more than anything I’ve seen in months.

It’s called The Island. And I wouldn’t have discovered it if it weren’t for something called Film Movement—but more on that in a moment.

The Island—in Russian with English subtitles—begins in 1942. Anatoly is a Russian naval officer cowering and groveling at the feet of the Nazis who have captured him. They demand he reveal the hiding place of his commanding officer, Captain Tikhon, and he fearfully obeys.

What happens next is a wartime nightmare. A gunshot. And then a series of explosions that will echo in Anatoly’s memory, tormenting his conscience for the rest of his life.

Anatoly’s become a grizzled priest, shoveling coal into the furnace at a monastery on the edge of cold, forbidding White Sea. Half-mad, he huddles beside the inferno, his dark memories tormenting him like a murder of vengeful crows.

Sounds depressing, doesn’t it? The Island, a 2006 film by Pavel Lounguine — only recently distributed in the U.S. on DVD by Film Movement — follows in a grand tradition of somber Russian literature, raising tough questions about the consequences of sin and the possibility of redemption.

But don’t let that stop you. Subtle comedy sparks and twitches throughout this chilly monastery. The solemn priests, while they pray and serve God with sincere conviction, are an amusing bunch—all furrowed brows and trailing beards. Anatoly’s peculiar pranks, prophecies, and small acts of rebellion annoy them like itches that get worse with scratching.

Is there method to Anatoly’s madness? Is he serving, or antagonizing, the Almighty?

You’ll have to see for yourself.

The Island is one of the most provocative parables to reach American moviegoers in years. Christians suspicious of foreign fare may be pleasantly surprised by this film’s bold depiction of Christian faith. (And some will rejoice to see a film in which a priest takes a firm stand against abortion.)

Visually enthralling and full of memorable performances, The Island won six Nikas (Russia’s version of the Oscars) in 2006, and a Grand Jury Prize at Sundance in 2007. Pyotr Mamonov is riveting as Anatoly; his performance makes you imagine what Daniel Day-Lewis might be doing in twenty years.

Perhaps the most interesting fact of all: Nora Fitzgerald (The Washington Post) notes, “After it opened in Moscow, priests and bishops began to bless the film, often standing in prayer outside theaters.”

How often do you see that kind of endorsement?

Why the long wait?

If The Island arrived in 2006, why haven’t we seen it yet? It’s a shame that it didn’t become an arthouse sensation or win an Oscar for Best Foreign Language Film.

Sadly, this is not unusual. Hundreds of substantial, scintillating films from around the world slip past American moviegoers every year. These unseen masterpieces lack big-name celebrities and groundbreaking special effects. They’re promoted with mere pennies, while American blockbusters have marketing budgets big enough to revitalize struggling nations. Further, their inventive storytelling discomforts American studio executives, who are seeking a “sure thing” with familiar formulas and sequels.

But if you’re like me, you enjoy watching inventive movies that confound expectations and kindle your curiosity—and you like discussing them with family and friends late into the night. So, do you want the box office to decide your moviegoing choices each month? Or would you like to host a world-class film festival in your living room instead?

These days, theater tickets are about $10, plus the cost of gas, popcorn and soda. An evening at the multiplex for two can easily cost $40.

Film Movement, the distributor that finally brought The Island to America, can top that with a “movie of the month” club, bringing films right to subscribers’ doorstep for only $15 bucks a month. Sure, you could rent these movies, but subscribers get them months before the stores do—andyou get to keep them!

They Have an Agenda

Film … Movement? Might they have some kind of agenda?

“I’m extremely proud to be working for this company,” says Gartenstein. “I get to distribute movies that I deeply care about. We look for films that are moving, extremely intelligent, and give you a perspective of a culture or a people that you normally don’t get to see. If these movies were not brought to America by us, they might never come here at all.”

Film Movement’s staff works hard to harvest superlative features from the world’s best film festivals. “We could make more money at the box office,” says Gartenstein, “but what drives us isquality. We refuse to be in this business if we have to lower our standards.”

Gartenstein’s adventures in international cinema began when he discovered the films of the great Japanese artist Akira Kurosawa. Then came Italy’s Cinema Paradiso, and Sweden’s My Life as a Dog, two films that made him think, “Wow. These movies are about life and real people!”

He set out to find buried treasure all over the world so he could mail it out to moviegoers, inspiring questions and conversation. “We don’t want our movies to be available only in the big cities,” he says. “Our movies are available theatrically in cities like New York and L.A., but there are a lot of people who don’t have an arthouse theater near them.”

Gartenstein admits that viewers might not like all of his selections. I wasn’t crazy about Choking Man, which had a lot of creative ideas but wove them together rather awkwardly. And some of Film Movement’s titles explore subjects that might make viewers uncomfortable — such as XXY, a story about an adolescent born with “genital ambiguity.”

But Gartenstein does not go looking for films that are dark or audacious—he goes looking for great art. He recommends you try a sample before you subscribe.

To get a taste for Film Movement’s offerings, Gartenstein recommends you check your local video store for Arranged, about the relationship forged between an Orthodox Jewish woman and an Orthodox Syrian woman who both live in Brooklyn; and a dark comedy called Adam’s Apples, one of my favorite films of 2007.

And of course, Gartenstein and I would both recommend The Island.

I’d also recommend Film Movement’s June release, The Grocer’s Son (French, with English subtitles), a romantic, amusing story of a prodigal son. Antoine (Nicolas Cazalé) has run away from his family’s rural life in Provence, turning his back on the family business. But when his father falls ill, Antoine reluctantly returns and agrees to save the family business, driving a mobile grocery store from hamlet to hamlet, bringing necessities to the old-fashioned farmers. And he finds that the work isn’t so bad—especially when he’s accompanied by Claire, a meddling beauty who has won his affections.

As Antoine reacquaints himself with the pleasures of country life, we learn a lot about a corner of the world most of us have never seen before. And when it’s over, we just might start planning a vacation.

Sometimes, it’s tough to learn to appreciate something beyond the familiar. Perhaps you or your friends don’t like reading subtitles, or are unaccustomed to observing other cultures or worldviews.

But when we listen to stories told by our neighbors—whether they’re next door or halfway around the world—we just might learn compassion for people very different than ourselves. When we embark on a cinematic world tour like the kind provided by Film Movement, we don’t have to accept everything we’re shown. God forbid. Discernment is a necessity in any moviegoer’s experience. But if we’re going to follow Christ’s command to love our neighbors, shouldn’t we be open to understanding them? By seeing the world through their eyes — through their art — we might just fall in love with them. We might make discoveries that humble us. We might catch glimpses of God’s glory in unexpected ways.

Film Movement has a whole parade of great new films planned for their subscribers. Up next: Ben X, a film festival favorite about an unusual young man whose obsession with a computer game gives him a way to answer the bullies who persecute him. (Watch the trailer here.) I can’t wait.

December 26, 2008
It Came Upon a Big Screen Clear: An examination of overlooked, underrated Christmas films
Next Post

December 30, 2008 Registration for The Glen Workshop 2009 is open!
Browse Our Archives
Related posts from Looking Closer