[These reviews of Still Life and Up the Yangtze were originally published in the “Through a Screen Darkly” column at Christianity Today.]

Nothing here along the Yangtze River is what it seems.

If we just look at the mountains, we’ll be fine. They’re breathtaking, looming green and formidable over the river’s winding silver path. They flow into and out of one another like waves, shrouded in an eerie mist as if the ghosts have gathered here to rest. If we watch cruise ships drifting quietly through these gorgeous gorges, we might be moved to make travel plans.

But two films—new on DVD—will give us pause. Both shine a bright light on these landscapes and reveal a story that Chinese tour guides would rather cover up.

The deep water is the result of China’s massive Three Gorges Dam project. In the works for almost a century, this concrete superstructure, nearly a mile and a half wide, was built in the middle of the Xiling Gorge to help control the Yangtze, which floods from time to time. But it will eventually accomplish much more: When the dam, Earth’s largest hydroelectric power station, starts humming in 2011, it will provide clean electricity for more than 400 million people.

But as a dam, it will also change the Yangtze’s flow. And since 2006, the waters have risen steadily across many miles. As a result, thousands of years of Chinese history, its ancient agrarian culture, and the homes and livelihoods of more than 1.2 million Chinese commoners have been displaced. It’s Atlantis all over again—only this time humankind is to blame.

Think about that number: 1.2 million people, many of them poor, compelled to climb to higher ground, watch their world drown, and start life over again. What China is doing to its own vulnerable people seems unconscionable. As its new economy flourishes, energized by a swell of capitalism, the future is a tidal wave crashing over the past, and the people of “Old China” are forced to adapt or fight the current and drown.

Take your own tour of this “progress” in Still Life, a dramatic feature by China’s celebrated filmmaker Jia Zhang-ke which won the Golden Lion at the Venice Film Festival in 2006. You can get a closer view in Up the Yangtze, a documentary by Yung Chang. 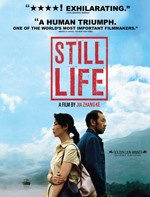 After the Flood: Still Life

Missing persons have driven the plots of a thousand movies. But how many searchers have gone looking for a missing neighborhood?

For Still Life, a drama, filmmaker Zhang-ke carried his cameras around the disintegrating area of Fengjie while the Yangtze rose nearby. In the midst of breathtaking scenery and bizarre scenes of demolition and desperation, he follows a man and a woman on troubling quests to find their lost loved ones. While Sanming and Shen Hong seek their significant others, Jia himself is looking for a lost world and searching for glimmers of hope.

Sanming (Han Sanming), a coal miner, has left Shanxi to return to Fengjie in hopes of finding his wife and teen daughter, perhaps to make amends for abandoning them sixteen years earlier.

But he can’t find them in the old familiar places because those places no longer exist. Asking directions to a particular address, he is pointed to the river. He drifts along on ferry boats, wanders through what looks like a bombed-out ghost town, and knocks on the doors of old acquaintances who populate ruins soon to be submerged.

Forlorn, Sanming is diagnosed by a friend as being a “nostalgist,” and thus unfit for this rapidly changing world. Then, in a moment that illustrates this collision of old and new, they play their cell phone ringtones for one another. Sanming’s is an old, old Chinese melody, while his friend’s is a dreamy pop song about a very different river than the Yangtze—a river of love.

It’s a complicated exchange. Is Sanming showing incapacity to move forward? Will the richness of past traditions be reduced to trite digital blips? Or is this a sign that Sanming is already finding ways to integrate his past and future?

Meanwhile, a woman named Shen Hong (Zhao Tao) is looking for her husband. He’s been so busy making money that he hasn’t bothered to check in on her for two years. Business is booming so loudly that its champions are deaf to the cries of those left behind.

Old and new are colliding in bizarre juxtapositions. Meandering children wander through the rubble singing ancient songs, while young men form gangs to rule among the ruins. A communist employer is confronted by an ever more assertive work force. A magician turns paper into money—one kind of currency, then another—which suggests another aspect of the people’s bewilderment as the world changes. How can they possibly understand what is happening to them?

In an American film, Sanming and Shen Hong would probably meet, commiserate, and fall in love. Nothing of the sort happens here. Jia isn’t writing to fulfill the wishes of the audience. He’s writing to testify of a people who have no power to see their own wishes fulfilled. The film’s Chinese title, Sanxia haoren, translates “The Good People of Three Gorges.”

Filming in high-definition video, cinematographer Yu Lik Wai seems awestruck by the environment. It looks like one of the most elaborate sci-fi wastelands ever filmed, but what makes Still Life so compelling is that all of this—the hollowed-out tenement structures that look like the smashed remains of wasps’ nests, the collapsing towers, the masked and uniformed workers who stalk through the debris like alien invaders—is real.

Well, almost all of it. To give us a stronger sense of his characters’ sense of alienation, Jia includes a few startling, whimsical flourishes. A skyscraper might just lift off like a rocketship and disappear, or a UFO might cruise across the landscape. Why not? To these common Chinese laborers, the world around them is turning into something like the Twilight Zone.

Viewers conditioned to expect fast action and rapid-cut editing may grow impatient with his slow, patient progress. More patient viewers will be rewarded with an experience unlike anything they’ve seen before. This film isn’t about the thrill of What Happens Next. It’s about spending time in one of the world’s most extraordinary places. Jia takes it slow so we can comprehend the effects of calamitous change on the environment, on people, on history.

But the film is not entirely without hope. The last thing we see is a tightrope walker—a human being suspended in space on a line, somehow making progress one shaky step at a time. 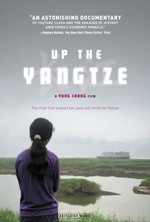 A Sobering Cruise: Up the Yangtze

Exploring the same context, documentarian Yung Chang crafts a vision that is equally surreal. Up the Yangtze is full of surprises.

Yung’s journey home, to visit the fishing villages along the Yangtze’s banks where his grandparents grew up, was not a happy one. It’s painfully clear, as he follows a cruise liner from the “New Hong Kong” into Asia’s longest river, that his family’s past is being wiped from the landscape.

Rather than dwell on his own story, he takes us into the lives of an impoverished family who have fished along the river for generations. While their ramshackle home is about to be submerged, they’re scrambling for survival on the edge of starvation.

Their 16-year-old daughter Yu Shui dreams of going to high school, but her parents reject the idea. Weeping for shame, they explain that their survival depends on whatever money she can make.

So Yu Shui goes to work for Victoria Cruises on one of the “Farewell Tours” ships. These luxury cruises give Western tourists a chance to marvel at the wonder of China’s progress.

It’s a humiliating job, but Yu Shui’s coworkers are competitive as they pander to Westerners’ wishes. They’re fighting to keep their jobs, get ahead, and find a place in an uncertain future. Their supervisor pep-talks them with English clichés: “You should have confidence in yourself. Where there is a will, there’s a way. Rome was not built in a day.” Yu Shui, homesick and lonely, can hardly contain her despair.

Her coworker Chen Bo Yu, three years older and far more ambitious, is a slick representative for a new generation of zealous Chinese youth. He speaks scornfully of those who have not been blessed with his urban middle-class advantages. While he already earns more than his whole family, his heartlessness is shocking.

While Chang’s cameras capture the grandeur of the place, the film leaves us with a feeling of claustrophobia, as if we’re sailing toward some forbidding future. In the closing shot, a boat seems to be sailing through the gates of hell. It left me gasping for air.

Up the Yangtze opens with this saying from Confucius:

By three methods we may learn wisdom:
First, by reflection, which is noblest;
Second, by imitation, which is easiest;
And third, by experience, which is the bitterest.

Reflection, imitation, and experience. Yung’s marvelous movie gives us all an opportunity for reflection. His filmmaking is a work of conscience and artistry, worthy of imitation. And the experience he offers, while at times embittering, shows us how artists can defend the defenseless and speak out for the poor. It also reveals what will happen to the human heart when we seek survival instead of grace, “progress” instead of love.