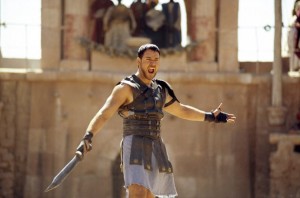 [Update January 2013: This review was originally published when the film opened in May 2000, at The Phantom Tollbooth. I remember watching in dismay as my prediction at the end of this review came true. I’ve seen the film a couple of times since then, and my opinion of it has not changed. I explored it further, with less snark, in Through a Screen Darkly.]

Gladiator, one of the summer’s surefire blockbusters, has arrived. And people are going to love it. It’s big, noisy, violent, and so shallow you can hardly splash in it.

Sticking closely to the tried-and-true model of the revenge story — probably the easiest and most unhealthy crowdpleaser formula of all – it tells the story of a wronged man determined to kill his enemy. There are some noises made about higher causes (the salvation of Rome, strength and honor, etc.,) but it’s clear… we’re rooting for the good guy to plunge his sword into the bad guy’s guts. And it works like a charm. Audiences are cheering to see justice done and villains punished.

I’d love to discuss the characters of Gladiator, but there aren’t any. There are only archetypes, basic Good Guys and Bad Guys.

Maximus (Russell Crowe) is a great but reluctant Roman general who loves his family and his farm. Maximus strong. Maximus handsome. Maximus good. This might work for comic book movies, but Gladiator obviously wants us to take it as a serious historical epic. (It strikes me as more hysterical than historical.)

Then there is Commodus (Joaquin Phoenix), the son of Caesar. You know he’s the bad guy right away: he sneers a lot, and his name is, well, Commodus. Commodus hates Maximus because Caesar (Richard Harris) would prefer to see his general rather than his son succeed him on the throne. Commodus coward. Commodus bad. Commodus liar. Commodus murderer. Enough? Commodus has perverse crush on his own sister (Connie Nielsen). Do you need any more convincing? Commodus BAD.

In a jealous rage, Commodus kills his own father, tries to kill Maximus, and seizes the throne. Automatically, the followers of the former, seemingly decent Caesar have become mindless puppets, evil robots, doing the barbaric will of a stupid and wicked new Caesar without hesitation. Maximus escapes his own death sentence only to find he’s too late to save his family. And so we return to the dilemma that made Braveheart such a crowd pleaser… and Mad Max… and [insert more Mel Gibson blockbuster revenge stories here].

Don’t worry, I’m not giving away any surprises. This is all in the first half hour. And the movie doesn’t have much more story to tell. The rest of it is sound and fury.

The story might have been intriguing if Maximus had become a real character. Unfortunately, he becomes sympathetic only because we see him suffer one trial after another. That’s the easy way to make an audience care about someone: beat them senseless with misfortune and injustice.

Who is Maximus really? We’re given no scenes of him with his family so that we care about them as individuals, but we are given scenes of their grisly end. (His son is played by the boy from Life is Beautiful, so we automatically adore him.) We are given no scenes of Maximus working the farm. He does have a loyal dog; we learn that clearly and early. But the dog disappears during the first battle and, inexplicably, is never seen again. What happened? Is he dead? Is he still running through the woods? (Aha! it’s a detail like the spray-can in Jurassic Park… a loose end to justify a sequel.)

The opportunities to develop Maximus’ character are innumerable, and not one of them is taken.

Maximus’ life will get worse before it gets better. He’s dragged off by slave traders (who came from where exactly? How did they know where to find a wounded and solitary man on the run?) He is sold to a trainer of gladiators, Proximo, and makes a name for himself by fearlessness in combat. Soon, he’s prancing around like a professional wrestler, but carrying that politically correct disdain towards such violence. “Are you not entertained?” he sneers at the crowd.

His fame spreads, and when Commodus, now a self-centered Caesar, re-opens the Colliseum for carnage, Maximus and his cohorts are off to be main attraction. Maximus’ journey from general to slave to training to the Colisseum happens in, oh, about fifteen minutes. Why slow down and tell a story? Why waste time? There is blood to shed!

Surely, you say, this movie has more to offer than violent spectacles. See the grand visual re-creation of ancient Rome! Look… the Coliseum! Look… people wearing togas! Look… senators! But you can get these things in any period piece. Nothing in Gladiator sets it apart from other films set in that period. Do we get to explore the streets? Do we hear anything about what makes Rome great? Do we learn anything about life in this rarely filmed chapter of history? Is there anything new in this re-creation?

Not really. The “good guys” talk about saving Rome, and that is made to sound like a good idea. But the characters can’t put into words what it is they are trying to save. “Rome is an idea.” “Rome is a dream.” “Rome is… a whisper.” It’s all about as substantial as a sound-bite campaign commercial. And while the movie wants us to cheer for the dreamers with undefined principles, the film itself seems to be custom-made entertainment for people with appetites like Commodus himself. No politics, no thinking, no exploration, no soul-searching. Just violence. “What goes on in Rome?” you might ask anybody who sees this film. “Gladiators fight and get killed there” is all they’ve been given to say.

The digital animation that raises this empire from the dust is sometimes pretty, but too-often shoddy. Except in the Coliseum, Rome is cast in a strange light that makes it look like the set for a perfume commercial, populated by large flocks of birds under strange skies. This film might make people appreciate the depth of field in the landscapes and cities of The Phantom Menace a little better.

Trying to keep up with the film’s breakneck pace, an admirable cast does their best with what they have. Ridley Scott depends on Richard Harris, Derek Jacobi, Oliver Reed, and the indisputably talented Russell Crowe to bring weight to this film. To their credit, they do make flat, Screenwriting 101 dialogue sound almost interesting. Joaquin Phoenix does his best as the sniveling Caesar-wannabe, but he is left with silly lines like, “I am vexed by him. He vexes me.”

Perhaps the truest words of the movie are given to Proximo (Reed) the trainer. He admits that he is an entertainer. He exists because people are drawn to bloodsport. That screaming crowd in the Coliseum is Rome’s true heart… people who get their jollies watching carnage. (I found myself longing to find Eric Idle and John Cleese dressed in togas somewhere in the grandstands, or Blackadder, just to provide some comic relief.)

And it’s all rushing to the by-the-numbers showdown. No sooner does Commodus declare “I will not make a martyr of him!” than he decides to challenge Maximus to public one-on-one combat. Huh?

As bloodthirsty as the mob, director Ridley Scott seems deliriously happy whipping up whirlwinds of violence. (His next movie is Hannibal, in which a serial-killing cannibal is elevated to hero status.) But he doesn’t even do violence well. He borrows camera speed-tricks from Spielberg’s Saving Private Ryan without learning how to use them effectively. As a result, the audience sees a lot of action, but has no sense of where the players are on the field, and rarely sees how anybody accomplishes anything. Imagine trying to watch a fight while having yourself beat up, and you’ll have the idea.

I doubt the actors even had to learn how to use a sword properly; the camera never stays on them long enough to show a duel. The battles display none of the art that gave at least aesthetic value to the duels in The Phantom Menace, The Matrix, Crouching Tiger, Hidden Dragon, and Rob Roy. I guess we’re supposed to buy the DVD so we can use slow-motion to determine just how Maximus wins these contests.

Are we ever worried that Maximus might not get his revenge? Is there any suspense built here at all? No. It’s all happening too fast, and too loudly, with the accompaniment of an awful, overbearing soundtrack by Hans Zimmer.

Gladiator is Braveheart 2; in fact, it’s Braveheart dumbed-down, if you can imagine that. One can imagine the conversation that Ridley Scott had with Russell Crowe : “Remember when Mel Gibson played William Wallace? Remember how he looked exhausted, numb with pain, and still kept fighting?” “Yes.” “Do that.” “Anything else?” “No, Russ…there isn’t time in this film for anything else.”

The film’s burglaries go much further than that. One romantic flashback, which is used redundantly, is a close-up of our hero’s hand gliding through the wheat of the farm he loves. This is a blatant rip-off from Terrence Malick’s beautiful work Days of Heaven, almost an exact copy. If a songwriter can sue a pop singer for stealing a melody, can any legal action be taken against something like this?

Yes, I’m going to have to make the comparison I was most afraid of… Gladiator is the World Wrestling Federation in historical costume. Or worse. At least WWF doesn’t pretend to have historical significance. I might go so far as to call Gladiator pornographic, in that it seeks to please our senses, to appease our appetite for something inappropriate, while it tries to make itself feel better with feeble conversations about vague notions of nobility.

There’s nothing wrong with wanting to see the bad guy get justice. And there’s nothing wrong with responding to one of our most elemental stories. This is a metaphor that resonates with us: “A hero will rise.” But audiences might reach for something more, a character that learns something, a glimpse of mercy, the kind of thing that made Ridley Scott’s Blade Runner a classic. I don’t remember Christ urging anybody on for revenge when he, the greatest of heroes, was done wrong. “Strength and honor” are Maximus’ ethics. Listen, though, to the audience as they leave the theatre. Are they talking about having been moved by honor and justice? Or are they going “wow” at the big noisy bloodshed so spectacularly delivered? What was this movie really about?

Watch how the mobs run to Gladiator in the modern coliseum. Watch how they’ll make this the blockbuster of the summer. And, God forbid, watch for it at the Academy Awards.