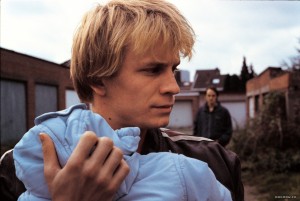 [This review was originally published at Christianity Today.]

Having released four masterpieces consecutively, a feat that few filmmakers in the history of cinema could claim to match, Luc and Jean-Pierre Dardenne have a great deal to teach moviemakers and audiences alike.

Their latest, L’Enfant (The Child), is a perfect example of their strengths, not just in its craft, but in its profoundly spiritual storytelling. Here are just a few of its virtues:

Yes, L’Enfant is one of the most artful and memorable films you’ll see this year. That should come as no surprise, since it won the highest honor—the Palme d’Or—at the Cannes Film Festival. What’s even more amazing is that the filmmakers have won Cannes prizes for three films in a row: Rosetta (1996), Le Fils (The Son) (2004), and now this project.

The bad news is that most Americans will never see it. It won’t play at the shopping mall cineplexes, which tend to limit their menu to movies marketed by major American studios. And when it arrives on DVD, it won’t have the promotional budget to take up a full row on the shelf at Blockbuster. So, if it comes to your town, take the time to drive out to an arthouse theater to see it, or to watch carefully for its eventual availability at quality video stores.

Here’s how it starts:

Sonia (François) has just been released from the hospital with Jimmy, her newborn baby. Back at her apartment, she finds herself locked out. Her boyfriend, Bruno (Renier), has sublet it to some renters. Feeling frustrated and alone, she goes looking for him … and finds him up to his usual tricks—begging and thieving.

Bruno doesn’t seem too interested in the baby, but he’s glad that Sonia’s free at last. To celebrate, he buys her an expensive present. (Money, he seems to believe, is how you buy happiness.) They’re both poor and, now, they’re both homeless, so he checks them into a shelter. But it’s only a short while before he’s back out on the town, wheeling and dealing for more cash.

The next day, while Sonia’s standing in line for some financial help, Bruno goes for a walk. And what he does next will astonish you, even if you already know it’s coming.

Contrary to most reviews, this review will tell you very little about the plot of L’Enfant. Viewers should be allowed to experience as much of the Dardennes’ work as possible without knowing what’s going to happen. Their style of suspense is unique. They let most of the film’s long scenes run in “real time,” allowing viewers to grow more and more anxious about what will occur next.

Further, the filmmakers put severe limitations on what we know about these characters. The camera sits on Bruno’s shoulder and refuses to reveal information that he does not experience for himself. We have to learn through his eyes and ears about his circumstances, status, history, and relationships. The naturalistic dialogue is believable, but offers only fragments of information. This makes us watchful, and it makes both Bruno and Sonia fascinating.

Frantic music, erratic editing, special effects, frequent shifts in perspective, beautified actors—we’ve become accustomed to so many “enhancements” in our entertainment that it’s hard to tell anymore if there’s a quality story within the sound and fury. But the Dardennes’ art is so concentrated, it doesn’t need artificial enhancement. And their commitment to providing the equivalent of actual human experience has a curious effect: it makes the story much more genuinely suspenseful.

Thus, when the film suddenly explodes into a car chase, it’s one of the most adrenalin-charged pursuits you’ve ever seen, even though it lacks the percussive soundtrack and multiple camera angles. You’re on the edge of your seat because you have come to understand just how much is at stake for these characters.

You’ll also be surprised at how the Dardennes’ attention to detail makes someone as reckless, hard-hearted, and cruel as Bruno into a compelling, engaging character. Because they start by focusing on Sonia’s trials, we quickly learn just how willingly Bruno inconveniences others. Then, when we meet him, we are astonished. He’s not the devil after all; he’s not calculated, malevolent, and destructive; it’s more like Bruno is missing a piece and malfunctioning. It’s as if morality is a concept entirely alien to him. So narrow is his perspective, in fact, that he is thunderstruck by his girlfriend’s dismay after he commits an unthinkable crime. This prods us to begin asking, “Why does he behave this way?” “What is motivating him?” “What has caused him to be so insensitive?”

And when we start asking those questions, the Dardennes have us right where they want us. L’Enfant, like The Son and Rosetta before it, feels like an episode in an alternate version of Krzysztof Kieslowski’s Decalogue. Each Decalogue episode illustrated how one of the Ten Commandments is relevant to everyday life. L’Enfant is an efficient, simple tale focusing on moral decisions and their consequences. Can Bruno make up for his mistakes? Does he even want to? What will it take to awaken his conscience?

But L’Enfant is more than just a morality play. It is an investigation of the societal forces that create such misguided people, such overgrown children. And while the filmmakers don’t serve up the answers in speeches, they allow all kinds of clues to come into the frame.

Sonia has the advantage; the way she carries her baby, it’s clear that she’s capable of caring about someone else intimately. Bruno carries a cell phone, and he behaves like a machine—always in motion, making connections, and predictably striving toward a single purpose—money. Even when he’s alone, or standing around waiting, he can’t stop typing in numbers and setting up transactions, regardless of their illegality. It’s only when his “power supply,” his funding, gets interrupted that he’s willing to compromise and feign concern for someone else.

As in the Oscar-winning Tsotsi, the presence of a baby serves to highlight the problems in the heart of his reluctant caretaker. And yet, unlike the screaming infant of Tsotsi, who seemed desperate and needy, the baby in L’Enfant is almost supernaturally quiet, and rarely seen because of his blanket cocoon. Little Jimmy’s behavior may be a bit unlikely, but it’s a sign of the storytellers’ unwillingness to take shortcuts to our emotions. Film critic Doug Cummings has noted that the Dardennes don’t want us distracted by “cuteness.” They want our attention on their designated subject: Bruno, and the forces shaping him.

The Dardennes insist that they are not making “Christian films” or encouraging a “Christian interpretation.” They told Sight and Sound, “We never wanted to express any thesis, Christian or otherwise—it’s simply a human story: you harm someone and you try to repent. But our civilisation is so much founded on religion that it’s hard to get away from it.” But whatever they claim about their work, art is capable of revealing far more than an artist intends. It would be interesting to hear an agnostic explain the existence and the work of conscience and grace in these characters’ hearts.

It’s worth considering another moral aspect of this film. Viewers are unlikely to find themselves in situations as desperate as Bruno’s, but they are very likely to encounter people like him. Films like L’Enfant can cause us to question our assumptions about the people we hardly stop to notice. Is it too much to hope that a film might provoke us to greater compassion for those who lack the education, the opportunity, and the understanding that many of us have been given?

September 1, 2010
Paste was too good to be true. Except that it was true.
Next Post