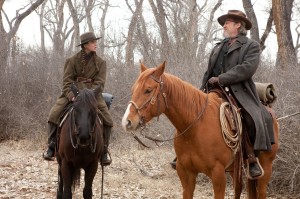 Pieces of this review were originally published in Image and Response.

The first is the story of what happens when a young justice seeker, Mattie Ross, hires the ruthless manhunter Rooster Cogburn to track down the vigilante who shot and killed her father. It’s a compelling story. Can 14-year-old Mattie make a journey into the violent, lawless wilderness and achieve justice without losing her soul, her innocence, or her life? Is she wise to take up with such a hard-hearted, hard-drinking man as Cogburn, or that temperamental Texas Ranger named LaBouef?

The second is a tale of two Rooster Cogburns — the one that gave John Wayne his only Oscar-winning performance, and the one that gave Jeff Bridges another Best Actor nomination after he took home a 2009 Oscar for Crazy Heart. In the 1969 True Grit, Cogburn was rather likeable, an iconic Western hero, even if he was a rough-talking drunkard. But in the Coens’ version, the alcoholism can’t be taken lightly, nor can his recklessness. He’s downright dangerous, and it isn’t until the film’s closing scenes that we see evidence of anything like a moral compass.

The third is the story of the American Western. Where Clint Eastwood (Unforgiven) and others have demythologized the West on the big screen, showing gunslingers in wide-brimmed hats to be making bad situations worse no matter how well-intentioned their violence, True Grit delivers a Western with heroics worth applauding. It does so without denying that justice can be bloody and costly. But best of all, it makes gestures of friendship, compassion, and grace burn brighter than any sharpshooting.

The film’s radiant scenery, handsome cinematography, and hymn-fueled soundtrack make this a vivid, hilarious, and haunting tale. We’re stuck with Mattie between the three poles of the law, lawlessness, and mercy, but the starry skies overhead suggest that there is someone watching over Mattie, who will carry her home in his everlasting arms when the strength of her own arms isn’t enough.

Is the new True Grit better than the original film? In every way.

The Coen Brothers are known for feeding great actors the best dialogue they’ll ever chew. And their faithful adaptation of Charles Portis’s novel serves up plenty.

As if he’s never even seen John Wayne in action, Jeff Bridges creates a spectacular Rooster Cogburn. Looking and sounding like a disgruntled walrus, this aging gunslinger is so inebriated and temperamental that you’re not sure if he’ll end up shooting his target, his companions, himself, or all of the above. When his burning chimney of a throat isn’t making his lines unintelligible, he’s as quotable as Bridges’ previous Coen Brothers character—The Dude.

In a supporting role as LaBoeuf, a Texas Ranger, Matt Damon is more playful than usual, showing that he’s a natural for bringing the Coens’ singular screenwriting to life.

And how about newcomer Hailie Steinfeld? Her debut performance as young Mattie Ross equals the work of her seasoned colleagues. Mattie’s a girl who will stop at nothing to outwit shrewd businessmen and bring justice to killers, but she’s also capable of giving grace to human wreckage. She might as well be the great grandmother of Fargo’s Marge Gunderson.

Mattie’s story tells us that justice is costly, and vengeance costlier still. But the pursuit of killers is not True Grit’s primary story. The central thread is a story filled with moments of nobility and heroism quite unique in the Coen Brothers’ canon. It’s about two broken people who form an unlikely bond. Having lost her father, Mattie finds in Cogburn a friend, a mentor, and a protector in a lawless wilderness. And Cogburn finds something he needed too—someone to love so much that he’ll stand up and become her champion, even if it means risking his rapidly collapsing life.

Shot through with sweat, shootouts, cigarettes, Scripture, and delicious dialogue, True Grit is a film I’ll savor for decades to come. Somehow, the Coens have produced a film that will probably be regarded as a classic of the genre, while still reveling in their love of distinct dialects, cartoonish personalities, oddball supporting characters, and absurd tangents. It’s too bad that this is the version that went home without any Oscars.

July 22, 2011 Auralia goes camping! Then, she goes to the Hollywood Bowl!
Browse Our Archives
Related posts from Looking Closer