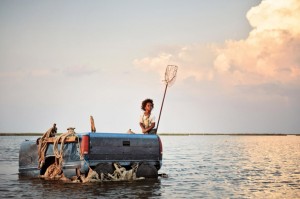 First… where it takes us. Second… what it finds there. Third… How it presents these people, places, and ideas. And fourth: What, if anything, it suggests we take away from the experience.

There is a lot to consider when we talk about any movie. But Beasts of the Southern Wild gives us a lot more to talk about than most films.

Given that Beasts is one of most unusual movies to play for large audiences across the U.S. in 2012, I’m inclined to say very little about its storyline. Moviegoers will probably enjoy the movie more the less they know about it beforehand. So, in the hopes that you’ll have a rare and wonderful time at the movies, I will keep my description brief.

Having won tremendous appreciation at Sundance, and starring Louisianans who have never acted before, Beasts of the Southern Wild is sure to become a landmark work of independent filmmaking. The story about how it was made deserves a lot of attention, especially from aspiring filmmakers.

But its subject is also quite distinctive. Beasts takes us to a wild, richly textured, volatile environment—South Louisiana—to witness a frightful series of events in the days before, during, and after Hurricane Katrina.

Guided through a bayou neighborhood called “The Bathtub,” we meet a six-year-old child called “Hushpuppy” who is treading water, so to speak, in a turbulent sea of trouble. Hushpuppy, small as she is, marches across the screen with unforgettable bravado and personality. Her hair seems to explode from her head, a physical manifestation of her near-perpetual states of alarm, anxiety, and awe. In one unnerving incident after another, Hushpuppy makes small progress, learning how to take care of herself, how to love her dangerously temperamental father, how grieve for her absent mother, and how to show respect to her colorful and cantankerous neighbors.

With voice-over narration, Hushpuppy lets us into her philosophical interior monologue. And so we learn that, through clashes with her father and watchful encounters with neighbors and nature, she is piecing together a unique worldview, trying to make sense of loss, dangers, and awe-inspiring calamity.

And what a calamity. As The Bathtub exists in a danger zone, on the exposed side of levees, Hushpuppy’s world is doomed to flood when storms arrive.

But the storm seems to be just an extension of Hushpuppy’s intensifying crisis. Her mother is gone, and we’re not exactly sure why. Did she abandon her daughter and Wink, Hushpuppy’s father? Did she die? It’s painful to watch this little girl living with those razor-edged questions. And although Wink clearly cares about his daughter, he’s clearly endangered by an advancing disease, and prone to spells of violent, drink-fueled temper tantrums.

It is one of the film’s great strengths that it invites us to respect the people of the Bathtub for their fierce community spirit and “make the best of it” independence.

It is also a testament to the power of our myth-making imaginations, that Hushpuppy, growing up outside of any religious education or storytelling tradition, builds a fantasy world in which she can embody her fears and face them. (They appear as boar-like monsters, the kind of demons you expect to see in a film by Hayao Miyazaki, not in a film that stresses its own realism like this one.)

The inexperienced actors are entirely convicing, especially young Quvenzhané Wallis who deserves award consideration at the end of the year. She has a rare gift for appearing utterly convinced of what is happening around her, and completely unaware of the camera’s presence. Where most child actors seem eager to please, Wallis seems to actually fear for her life as the storms of weather and human behavior crash over her. Dwight Henry is also convincingly and discomfortingly persuasive as Wink. Their scenes together don’t seem crafted to fit familiar patterns, but have the particular and often meandering quality of lived experience.

Benh Zeitlin, a first-time director, arrives in exclamation points. He films this as if he has too busy capturing this vision to watch, or think about, how movies have been made before.

So why, then, do I find myself writing this with a sense of sadness and detachment? It’s because, unlike almost all of my colleagues, I was never inspired by this film. Impressed, yes. Enthralled, sometimes. But when the film goes for some kind of inspirational rush, I felt as if I had missed something… that what the film treats as a liberating epiphany is, actually, a reason for heartbreak.

I think my disillusionment with the movie has something to do with, to borrow Ebert’s famous line, “how it is about what it is about.” The mix of poetic cinematography and jarring, handheld video close-ups was distracting to me. (“But you love Terrence Malick’s films,” somebody will say, “and he does the same thing.” No, actually, I don’t believe that he does. I find that Malick’s images are constantly “speaking” to one another, suggesting poetic implications that accumulate in complexity and power as the film progresses. I don’t sense that kind of image-based dialogue here.)

But more than that, I think my disillusionment comes from what I think the film wants me to take away from it. It wants me to be inspired by Hushpuppy’s evolution from frightened child to kickass survivor, from heartbroken child to asserting “I’m the man!”

Hushpuppy is an endearing character. We can’t help but love her. But it seems to me, upon this first viewing, that the epiphany of her story really this: That she must pull herself up by her bootstraps, grow up, learn to accept excruciating and unfair losses, and fight back as an aggressive and assertive survivor. She will embrace the Bathtub’s “leave me alone” lifestyle, and let her freak flag fly. Her defiant “I’m the man!” seems to be the pivotal moment of the movie.

It struck me as strange that the film’s interest in the complexity of the Bathtub seems to stop at that territory’s borders. Law enforcement figures are portrayed as one-dimensional aggressors, even in their attempts to pull the Bathtub residents back from the descending hurricane. Even more distressing to me is the film’s depiction of humanitarian aid workers as uniformly threatening, insensitive, even hard-hearted.

“But this is from Hushpuppy’s point of view,” you might say. “She hasn’t been prepared to perceive them as anything else.” Perhaps.

But the film is not consistent in representing a reality distorted by Hushpuppy’s youthful naivete or wild imagination. Some scenes take on a certain surreality, as she struggles to reckon with dangers that no child should have to fear. But scenes involving aid workers contain no sign of a “Hushpuppy interpretation”—they’re played straight and literal. It struck me as a brutal protest against everyone who sought to reach out and help people endangered by calamity.

If “I’m the man!” is the lesson Hushpuppy must learn in order endure in hardship and transcend the failures of adults around her, fine. But the film seems to treat mere survival as a sort of ideal for humankind. And its frequent association of these beautiful, broken human beings with tenacious animals—it’s right there in the title—is similarly unsettling, as if their scrappy “I’ll do it my way” independence is not a path some take from necessity, but as if it is the life to which we should all aspire. I can believe that Hushpuppy would become a girl who fights for her community’s way of life, but I view the brashness, the defiance, the “Don’t mess with us” attitude as a problem, not a triumph. It is not a step in the direction of peace, understanding, reconciliation, healthy human relationships, and loving families. It is an affirmation of dangerous tribalism.

I offer these responses with implied question marks. Perhaps I’m overly troubled by parts of the movie, and perhaps I’ve missed or unfairly dismissed details that would bring balance and nuance to these characters and events. I’m sure a second viewing will tell me whether I am protesting on solid ground or if I’m misinterpreting what I saw.

But where so many emerged from Beasts of the Southern Wild feeling a kind of euphoria, I left sad and discouraged and even a little aggravated. Lessons like those that Hushpuppy learns might make her a survivor. But in the long run, does it enrich—or diminish—what distinguishes her as a human being? What is she becoming? It’s believable that she’d become a ruthless survivor… but does that merit the conclusion’s furiously celebratory tone?

At the end, I’m grieving at the absence of anything resembling love and compassion in Hushpuppy’s life. The music that those closing moments demand is something troubling and tragic, not a soaring, triumphant anthem.

July 11, 2012
Darren Aronofsky's Noah and the Pending Deluge of Bible-Based Movies
Next Post 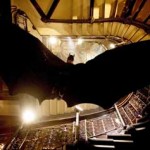