Warning: This is not a review. This is a rant. And it is full of spoilers.

I really hoped J.J. Abrams’ Star Trek Into Darkness would be a little better than the first movie. Finding myself too tired to work last night, I thought I might give it a chance. At least the amiable cast and the special effects would take my mind off my troubles.

But alas, no. Now I have more troubles.

Wow. How do I despise this movie? Let me count the ways.

I can almost hear the script meeting…

“We need an action-packed opening sequence.”

“Put Spock in volcano, and let’s put Kirk back in another ‘the ends justify the means’ situation.”

“Okay, sure. But more intensity.”

“They’re on a mission to save a people from extinction. Put the Enterprise underwater, because if the aliens see it, it’ll ruin them!”

“But… won’t they see that massive spaceship when it flies in and hides under the ocean?”

“Never mind. If the audience doesn’t see that part, they won’t think about it. But it’s still not enough! We need more intensity!”

“Steal the opening of Raiders of the Lost Ark. That’ll be cool. Let Kirk steal something important from their temple, and then he has to flee through a jungle from a host of spear-throwing natives.”

“You can never go wrong with a Raiders reference.”

Okay, that’s how it starts. And it’s pretty much all downhill from there.

The team members all quip their signature lines, and the audience chuckles in recognition.

The lead characters struggle to learn lessons they learned in the last movie.

Carol “Blonde” Marcus, played by Alice Eve, is included merely as a convenient plot device. No, wait. I’m sorry. She serves another very important purpose. The movie needs somebody to give the screen a jaw-dropping set of curves in a lingerie-modeling shot. You know… for adolescents! Isn’t the objectification of women so wonderfully old-fashioned?

(Need I mention that this moment is another rip-off from Raiders, although handled without any of the restraint?)

The other prominent female character, Uhura, has an important role to: To ensure we don’t confuse the Kirk/Spock bromance as a gay love story.

The one recurring cast member in this franchise that I find interesting? He gets killed off in a forgettable scene of sound and fury — this year’s installment of Scenes In Which a High-Powered Aircraft Descends to Open Fire on People Inside a Skyscraper.

The fight scenes in this movie reach staggering heights of physical impossibility, so much so that all suspense is drained, and no punch carries any real weight. It just becomes an absurd marathon of people emerging un-bruised from bouts that would kill history’s greatest boxers. I mean, Yeezus. Even Indiana Jones had trouble recovering from the punches he took. Remember?

And then, in its enthusiasm for reminding us of the original franchise’s most “sacred” moment, it severely cheapens that moment. A crew member gives his life — such heroic sacrifice — but don’t worry. We won’t have to wait years hoping for a mystical resurrection this time. We’ll only have to wait a minute for a quick injection of Unbelievably Timely New Biological Science so that Abrams can pull a “Ha! Made you look!” trick…

… and that raises this question: Can this nifty new Resurrection Syrum help any of the dead in this franchise from here on out? This development, in addition to the franchise’s already established time travel capacity, makes it inconceivable (!) that our heroes will ever face anything they can’t overcome. The suspense, already registering at Zero, is killed even deader.

Which leave me wondering why such miracles aren’t afforded to theguaranteed thousands of casualties from the big-city calamity that is included as a disgustingly indulgent shock-and-awe spectacle, one for which we are given only a fleeting blink of solemnity about the massive losses.

And then, swoosh! We’re rushed into an epilogue with smiling, good-humored heroes ready to leave earth behind for five years of space tourism. Why not? Let’s put earth and its gaping, bloody wounds behind us.

Not to mention the fact that the epilogue’s guilty-conscience tribute to the original TV series pretty much acknowledges we’re two movies through the franchise so far without any attention to the core characteristics that propelled Roddenberry’s source material.

As Roderick Heath writes, J.J. Abrams’ Trek films preserve “only a thin veneer of the inquisitive humanism and speculative eccentricity that was the point of Roddenberry’s creation. This edition provokes suspicion, reinforced by Abrams’ own admissions, that he uses the superstructure of the Trek mythos in service to space opera malarkey whilst ignoring the richer and stranger texture of the source, the patina of flower-child idealism emphasising the multitudinous possibilities for contact and communication in the universe. …  Even at its corniest, Star Trek was about wonderment, curiosity, and awe, but these seem to be aspects our screen culture has lost.”

J.J. Abrams. More than ever, it’s becoming clear that all he can do is link together LEGOS that came from other movies’ LEGO kits. When Cumberbatch’s character meets his maker, there’s an alarmingly unapologetic cut-and-paste right out of Blade Runner. You can tell that Cumberbatch is acting to exactly match Rutger Hauer’s facial expressions. What is going on here? That’s not homage… that’s unapologetic stealing!

Oh, and a nod of admiration to Benedict Cumberbatch: An actor giving his all to a film that doesn’t deserve him.

I know, I’m ranting, spending more words on this movie than it’s worth.

But I’m angry. This movie didn’t just bore me and bother me. It pissed me off.

It wasn’t that long ago America was wringing its hands and saying we would never go back to depicting violence and mass casualties lightly. But how many American cities and landmarks have we seen destroyed as a desperate measure to lend some semblance of “importance” to what should be serving the purpose of fun summertime entertainment?

This movie’s appalling exploitation of 9/11 for action-blockbuster entertainment is the equivalent of going up to a war veteran, forcing him to play a video game that causes flashbacks to the calamity that gave him Post Traumatic Stress, and then rewarding him with a Slurpee. Yay, movies!

Gee, I hope the terrorists come up with something even more brilliant than 9/11 next time. Because action movies could use some new ideas.

Okay, not really. But man… that seems to be the way Hollywood storytellers are mining national nightmares for box office gold. I’m sure those who lost friends and loved ones in the Boston bombings and the attacks of September 11th are really loving escapist fantasies like this.

Note: The image you see in this post is from a deleted scene… one that reveals yet another moment in which they almost made another clunky Blade Runner reference.

For the record, this has been the most common response to my Star Trek Into Darkness rant: “Well, if that’s how you feel, stay away from Man of Steel. When it comes to senseless devastation and 9/11 exploitation, it’s ten times worse.” 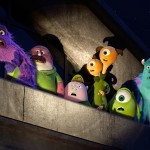 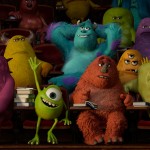 6 responses to “Star Trek Into Heartlessness”