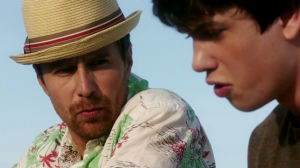 He’s in the way, way back of the family station wagon, looking out the back window at his past… the happy times, when his family was a unit.

What happened to Duncan’s father?

Why is he on a road trip with his mother and her boyfriend?

And why is that volunteer stepfather throwing fuel on the fire of Duncan’s insecurities like some kind of pyromaniac?

Come to think of it, why is Duncan sitting in the back, facing the places he’s been? Maybe he hopes Trent, the middle-aged bully at the wheel, will forget that he exists. Or maybe Trent put him there to make him feel like nothing more than baggage.

And by the way, way: What in the world?! Who drives a station wagon like this anymore? Is this movie set in the late ’70s?

There’s a lot about The Way, Way Back that feels way, way old-fashioned and, thus, way, way predictable. There’s the after-school-special simplicity of its plot. There are the obvious lessons to be learned about coming of age, learning to stand up for yourself (and your mother), and learning to “go your own way.” (Queue the pop-song soundtrack.)

Even more predictable is what critics will say about it. Many will bring down the sledgehammer on its formulaic storytelling. Others, especially those in right-wing media who are more concerned with ethics than artistry, will praise it to high heaven: Finally, a movie that forces a lesson about the evils of divorce and irresponsible parenting!

They’re both right, to a degree. But I’m happy to argue that The Way, Way Back is worth seeing because its first rate cast takes a decent script and makes it way, way better. I’m also happy to affirm its truthful, even courageous insistence on the importance of fidelity and responsible parenting. Ladies and gentlemen, here’s a new flash: Parents who prioritize their own romantic fulfillment over their roles as guides and examples to their children are lighting fuses that will set off explosions that hurt everybody — the children most of all.

But I also cannot deny that, while the movie has some impressive moments, there isn’t a single great moment. While the story makes certain things plain, it’s devoid of visual poetry. It’s one of those movies that basically turns on a camera and documents people saying things.

Thus, it’s not likely to stick with you. It’s sweet, it’s good for you, it’s simplistic and unsurprising, and it vanishes. In other words, it’s one of those summer juice pops that’s designed to make your daily dose of Vitamin C appealing. No harm, no problem, and no big deal.

So… to the story: Trent, Duncan’s stepfather-in-the-running is driving Pam (Duncan’s mom), Duncan, and his own typically self-absorbed teenage daughter Stef to a Cape Cod beach for the summer. That’s where Trent plans to go on romancing Pam. That’s where Stef will sit around being snotty with the local Mean Girls. And that’s where Duncan will fumble around for a reason to exist.

Wow, this kid is so disconcertingly insecure that it’s hard to believe he appears in an American movie. When he isn’t being neglected by his mother, treated like a slave by Trent, or laughed at by other teens, Duncan’s in danger of disappearing into the black hole of his broken heart. His father is living with his new squeeze (a much younger woman than Pam, of course). And Duncan’s mother barely notices him. She’s too desperate to fill the void in her heart,  so she’s idealizing the only charismatic man around and giving him all of her attention. (To everybody else, Trent is obviously a ticking time-bomb of vanity, superficiality, and hypocrisy.)

Children of divorce, neglect, abuse, or some combination of the three are more likely than most kids to seek out activities that will serve as anesthetics, escapes that will render them less capable of meeting life’s challenges. (And who can blame them, since their role models taught them to do whatever they want to do, no matter who gets hurt?) 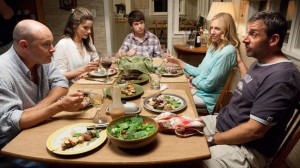 Fortunately for audiences, The Way, Way Back doesn’t follow Duncan into a downward spiral. Even better, it doesn’t follow him into a fairy tale happy ending. I wouldn’t call Duncan’s story “plausible,” but at least it leads him into unlikely relationships that give him reason for hope.

The first is literally the girl next door. Susanna, the attractive teen daughter of the flamboyant, tipsy beach house neighbor, seems to understand Duncan’s sadness. Instead of running away, Susanna moves toward him, reaches out, shows compassion. And the two find a bond of empathy and friendship… one that is almost too convenient.

Several things threaten to throw this film off-balance into wishful thinking, and Susanna’s affection for Duncan is at the top of that list. I was an awkward high-schooler, I’ve known a lot of awkward high-schoolers, and I never saw anything even remotely resembling this kind of heaven-sent crush reciprocation. Fortunately, both Duncan and Susanna are played with personality and persuasive sensitivity by newcomer Liam James and the frighteningly confident AnnaSophia Robb (Bridge to Terabithia, TV’s The Carrie Diaries).

The second surprise friendship comes in the form of a middle-aged goofball named Owen. Owen’s greatest accomplishment is managing to hold down a job at the beachfront amusement park called Water Wizz. He’s lazy, quick-witted, immature, somewhat pessimistic, and yet surprisingly insightful when it comes to Duncan. He recognizes the hole in Duncan’s heart, and knows what to do. He steps in and gives him trustworthy, unconditional friendship. If Owen could overcome his own challenges instead of just worrying about Duncan’s, he might find a better future for himself. The park’s manager, played with tenderness by Maya Rudolph, is watching Owen closely, seeing potential in the man he might become.

For Duncan, Owen is a life-saver. But for the audience watching this movie, the actor who plays Owen makes this movie way, way worth the price of a ticket.

Sam Rockwell’s cocksure demeanor, his gonzo sense of timing, his devil-may-care grin (he really should play the Cheshire Cat someday), and his improvisational shtick have made him one of the most predictable big-screen presences in American movies. That’s not necessarily a bad thing. As with Robin Williams’ Tasmanian Devil hyperactivity, Charles Grodin’s sullen sarcasm, Jim Carrey’s Plastic-Man expressions, Will Ferrell’s man-child obliviousness, Jack Black’s brash madness, and Fred Willard’s wonderfully appalling impropriety, Rockwell’s comic personality is entirely his own. Inimitable. Hard to describe. Immediately recognizable.

Rockwell’s charisma is like the Colonel’s Secret Recipe — a mysterious chemistry that keeps people coming back, but also a brand that can get old fast if you have too much of it. Sometimes, when filmmakers throw talents like this into a mix as if they’ll  automatically add value to the situation, the strategy backfires. Just as Rockwell’s  personality can become a movie’s shining glory, it can also sink the picture if he doesn’t fit in. In Seven Psychopaths, I found Rockwell presence aggravating and his character poorly written. In Iron Man 2, his personality was just one of the film’s many gratuitous special effects. Let’s not talk about Cowboys and Aliens.

But when Rockwell goes to work on a well-written character, and is wisely directed, he can find real soul in even the most obnoxious character. In Galaxy Quest, he made so much out of so little, and it was a star-making turn. He did wonders with more substantial roles in Matchstick Men and The Assassination of Jesse James by the Coward Robert Ford. And he silenced his critics with a complex and brilliant performance in Moon, a film that he had to carry almost single-handedly.

But The Way, Way Back gives him what may be the character best-suited to his talents.

Owen is complicated. He’s a guy who could have easily soured with self-loathing over his failures, and turned bitter with disappointment at the dead-end of his life. But instead, he’s like the ideal class clown — he’s a likable joker without an ounce of bully in him. And, with humor and imagination, he makes the most of it, applying himself to improving life for everybody around him. He recognizes the need for others to take risks, get involved, and make something of themselves even in this unremarkable water park.

Owen is a great character. And I guess the highest compliment I can give Rockwell is that I believe in Owen so completely that I wouldn’t want to see anybody else in the role. 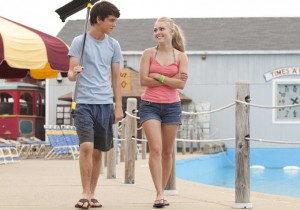 It’s good that we meet him early in the movie. He very quickly provides a center for the film.

Don’t get me wrong — Liam James is just about perfect in the lead role. He makes Duncan convincingly sullen and insecure. We’ve all met some poor, disrespected adolescent who seems to have accepted the message from heartless adults that he’s good for nothing. Wisely, Paxon and Rash refrain from transforming Duncan from a depressed kid into a teen heartthrob. He’s the same awkward kid at the end that he was at the beginning, except for his posture, and for the spark of hope that has been lit inside of him. He started as a tangle of disappointment and self-doubt and anger, and under the influence of Owen’s surrogate fatherhood and Susanna’s almost inexplicable sweetness, he loosened up and straightened out. Duncan is one of the most believable teen characters I’ve seen in an American comedy.

But the fact that life has buried Duncan deep inside of himself means that somebody else has to bring the movie to life. Rockwell’s Owen works like magic.

And the rest of the cast ensure that every character is not only memorable, but human.

Steve Carell, in a role that expands our understanding of his powers, makes Trent almost insufferable — and yet, somehow, he ends up being more of a mess than a monster. That’s the work of a gifted actor.

Similarly, Allison Janney might have made Betty, Susanna’s perpetually intoxicated mother, intolerably zany. But Janney’s too good for that; she finds some wisdom within the flamboyance and escapism.

The film’s other prominent couple, Kip and Joan, played by Rob Corddry and Amanda Peet, could have been flat and forgettable. But you’ll believe in them, too, by the end.

The posters for The Way, Way Back boast that this film is “from the studio that brought you Little Miss Sunshine.” That may seem like a desperate bid for attention. But it’s not a bad reference, actually. Like Little Miss Sunshine, it shares countercultural insights about the pursuit of happiness, and its cast is like an accomplished gymnastics team, striking a perfect and complementary balance of drama and comedy that remains recognizably and gracefully human, never stumbling into mere sentimentality.

It doesn’t aim as high as Little Miss Sunshine did. (I’m still grateful for that movie’s hilarious conclusion, which exposed how America’s children are often exploited by self-centered parents and a celebrity-obsessed, sex-crazed culture.) But that’s okay. This film aims to tell a smaller story. I think it arrives at an impressively modest, understated, and encouraging conclusion.

Above all, it’s a blessing for those of us who would hope that 10-to-13-year-olds would have movies to see that focus on human beings instead of Transformers, superheroes, explosions, fart jokes, and spring breakers.

Buy tickets. Let’s make it the sleeper hit of the summer. 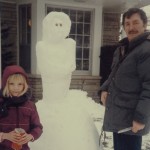 July 9, 2013
Five Must-See Movies of the Summer (Including "Stories We Tell")
Next Post 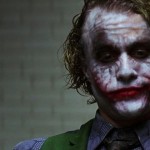 July 16, 2013 Why So Serious? Why, It's My Fifth Dark Knight-iversary!
Browse Our Archives
Related posts from Looking Closer