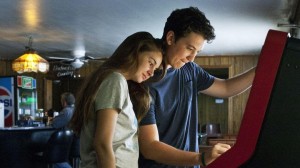 First of all, thank you for The Spectacular Now.

During a summer overstuffed with blockbuster excesses, I found myself encouraged by the way your movie reminded an attentive Seattle audience that real movie magic comes from human beings, patient observation, truthful storytelling, and nuanced performances from talented actors.

Secondly, I highly recommend that all three of you get to know an author named Sara Zarr.

Zarr’s five novels about young adults are ablaze with the kinds of characters you clearly appreciate, with those moments of searing truth that set us free, with real-world complications and surprises. The highs that you hit in The Spectacular Now, her stories are full of those things.

And what is more, Zarr’s stories end even more powerfully than they began. And that, I think, is where The Spectacular Now stumbles.

Now, don’t get me wrong — I’m not here to tear apart your movie. I’m recommending it.

I’m recommending it because Miles Teller, in the role of Sutter Keely, gives us a completely believable high school charm wizard.

I recognize this guy. He’s the guy pretty much everybody likes because he’s cool, confident, funny, self-effacing, well-dressed, and agile in any circumstance. He’s the Justin Timberlake of his graduating class, radiating love for everybody, free from the clique-ish divisiveness that corrupts and ruins so many high school communities. He’s the poster boy for fun, for parties, for everybody getting along, for enjoying the good life, and for scoring with the hotties.

But he’s also over-eager to be liked and affirmed, because his father went missing in action early in his life. He tells himself an impossible story, idealizing that Missing Person, because it allows him to live carefree, without worrying about the future. And, to avoid facing his fear that his father might have been an asshole, he drinks. He drinks all of the time. He drinks from a flask, thinking this is a demonstration of sophistication and maturity and control. But he also spikes his Slurpees to keep the buzz going, to avoid the harsh and revealing light of the truth.

At the same time, he works in a men’s fashion boutique, focusing on outward sophistication — “I be on my suit and tie” (Sing it, Justin Timberlake!) — to cover up the mess inside.

I’m recommending the movie because it allows Sutter’s family to be complex and human. His mother may be difficult and jaded and somewhat overbearing, but she’s also hard-working, and some of her control issues are motivated by love. Jennifer Jason Leigh is at her best when her character is allowed some dignity, and I was glad to see her here. Mary Elizabeth Winstead is a blessing to every film she’s in, and she gives Sutter’s sister radiance, intelligence, and heart. Kyle Chandler makes the most of his brief screen time, somehow portraying stereotypical human wreckage in which we can see the likeable charmer that he once was. He’s both the father that explains Sutter to himself, and a glimpse into Sutter’ fast-approaching future.

Above all, I’m recommending this movie for Shailene Woodley, who fulfills here the promise she showed in The Descendants. I have a lot of nieces who are in high school and college right now, and Woodley’s character — Amy Finicky, a pretty wallflower who is both persuasively and bashfully smitten by Sutter but also frightfully intelligent and courageous — was as real to me onscreen as any of my nieces are to me in person. She’s allowed to be complex, and to have a real-world teenager’s complexion — which is so much more appealing than the plastic Barbie-doll gloss of most big-screen actresses’ foreheads.

The rest of the community — Sutter’s noble chemistry teacher (The Wire’s Andre Royo); Sutter’s boss (Bob Odenkirk), with whom he shares the movie’s best moment; and his rapidly maturing ex-girlfriend (Brie Larson) are all people I recognize and believe in.

But alas, the film squanders most of that suspension of disbelief by fumbling the film’s turning-point crisis. I won’t spoil what happens, but one character’s temper tantrum seems forced and unconvincing, followed by troubles that are swift and severe, and then — just as swiftly and severely — resolved and put aside. (Seriously, if you’re going to cause the audience that kind of lightning-bolt trauma, you need to walk them through some kind of recovery; don’t leave them sitting there wondering, “Wait, didn’t something really, really, really awful just happen?”) I was so bewildered by this that I found myself unable to re-enter the world of the movie, which wrapped up far more quickly and neatly than I’d anticipated.

I don’t think this is just a case of a missing scene. I remember feeling similarly about the preceding Neustadter/Weber movie — 500 Days of Summer — which was whimsical and inventive and absorbing during its first half and then began to lose steam in the second.

So again, back to the point about Sara Zarr.

I’m not just putting in a vote for my favorite YA novelist. I’m inviting you, or some other lucky filmmaker, to study how beautifully Zarr’s stories resolve. The crises all rise naturally from the characters’ flaws, from the chaos that unfolds in the midst of their attempts to force their will upon the world. And those crises are more than a punch to the kidneys of our emotions. They create circumstances in which all kinds of truth is revealed, and we move through those difficulties thoughtfully.

Read Story of a Girl (a National Book Award finalist), Sweethearts, What We Lost (formerly titled Once Was Lost), How to Save a Life, and The Lucy Variations. Maybe you won’t make one of her novels into a movie. Maybe you’ll just learn something from the way she does it.

That would be good for characters, movies, and audiences.

P.S. While I share your love of Cameron Crowe’s Say Anything and Almost Famous, and I support your intention to give the world more of that kind of beauty… I’m not sure it was wise to include that introductory video in which you praise those films and set us up to expect the same kind of vibe from The Spectacular Now. It’s distracting. It had me comparing the film’s self-consciously from the beginning, and thus it made my frustrations with the conclusion of the movie that much more difficult because I quickly remembered just how perfectly Almost Famous ends. 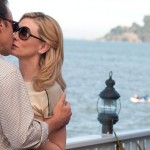 August 20, 2013 A Coen Brothers Concert and a Line-Up of Must-Play New Releases: Are You Listening?
Recent Comments
1 Comment | Leave a Comment
Browse Our Archives
Related posts from Looking Closer