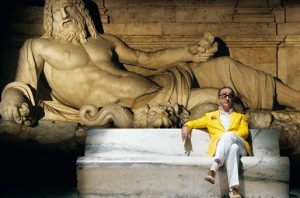 The Great Beauty. You have to have some ambition to give a movie a title like that.

And Paolo Sorrentino has ambition. Huge ambition. Maybe a little too much.

I’ve just seen The Great Beauty on the big screen, and I’m still a little bit drunk on its imagery. Turns out that the title is entirely appropriate for so many reasons. Sorrentino’s camera-eyes are as wide open to glory as Terrence Malick’s. (This film seems as heavily influenced by The New World and The Tree of Life as it so obviously is by 8 1/2 and other Fellini classics.) It’s a feast for those with big appetites for beauty on the big screen.

But alas, the meal is tainted by a bitter syrup.

Imagine Woody Allen makes his most cynical movie, but then has it filmed by the great Emmanuel Lubezki, who finds himself caught up in a fever of inspiration. I don’t know that I’ve ever seen a film in which the visual glory on the screen is so at odds with the philosophy evident in the screenplay.

Throughout the film, the novelist and sensualist Jep Gambardella (played with wry humor by Tony Servillo) wanders through present-day Italian culture spouting cynicism and nostalgia and despair. It would be hard not to. Rome is an amusement park of historical greatness, so how can any contemporary society be anything but intimidated in the shadow of its architecture and art? Jep copes by deconstructing everybody and everything in sight — including himself. He probably thinks that his mock humility gives him an excuse to eviscerate others, but no… he’s too cruel, too relentlessly cold, too blind to the obvious glory of the world and the people around him.

I was fine with Jep’s cynicism so long as I believed the film would eventually separate itself from his philosophy. I wholly expected that there would be a turning point at which the film would acknowledge that Jep, for all of his affairs and self-indulgence, is missing “The Great Beauty” of life at every turn, not to mention spoiling it with every soliloquy. 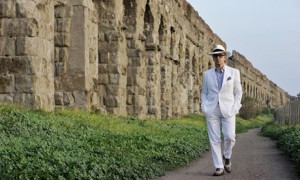 But that never happens. In the end, Sorrentino seems to side with Jep — that the best we can hope for in life is a fleeting moment of rapturous grace, an encounter with something that qualifies as “The Great Beauty.” That moment will probably come in our youth, according to the film. And once that’s over, it’s over. All that’s left to do is sadly chase after fading echoes of that sublime melody. All other pursuits — even religious quests like the one undertaken by the film’s ancient Mother Theresa-like figure — are just attempts to regain whatever qualified for us as “The Great Beauty.”

During what feels like the film’s central scene, Jep tears to shreds the opinions and character of a fellow intellectual, humiliating her for all to see. And that’s when I realized what this movie is: It’s really just Mike Leigh’s Naked all over again… except that this time the sadistic philosopher is a celebrated, wealthy writer who looks pretty cool as he tears the world down around him. Where Naked‘s Johnny is clearly a black hole, moving like a Looney Toons Tasmanian Devil through relationships, clearly reprehensible and vacuous — but still possibly redeemable — Jep is suave, sophisticated, and a world-champion womanizer who seduces us along with everybody else. With his witty monologues, he invites us to look down on everybody and everything. When he reaches the suburbs of true love, he gets a little wistful and then veers right back into the heart of darkness. In Jep’s world, there is no redemption to be had, unless it’s a sad, slow dance with someone who is his equal in hypocrisy.

Yes, he’s self-aware and self-loathing, like Johnny in Naked. But Mike Leigh saw that the possibilities of real love could include more than just the entanglement of two sexy young people who kiss for 24 hours a day. Leigh saw richness in tenderness and generosity… even generosity rejected. We all need grace, but we cannot receive it without surrendering our pride and opening ourselves up. Naked‘s Johnny is offered grace and, realizing that it requires him to surrender his masterful hatred and egomania, he recoils and runs away. Here, the only real grace I see in Jep’s life story — accepted or rejected — is some kind of ideal, virginal, perfume-commercial erotic encounter that, once enjoyed, can only be recalled sadly in waves of heavy-hearted nostalgia.

I would have found the last hour more compelling if The Saint hadn’t looked like a leftover Muppet from The Dark Crystal. Why couldn’t they have let her look like a human being? She was so artificially crusty that I kept waiting to find out she was digitally animated, like the film’s tallest character — an entirely unconvincing giraffe. 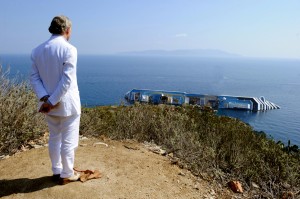 In the end, I don’t think the filmmaker removes himself from Jep to see him as a tragically smug and delusional figure. I think he’s identifying with Jep, and thus sinking with him, oblivious to what the light all around him is suggesting.

And oh, that beautiful light. I cannot help but savor this film. No, I’m not going to let Sorrentino win. It sucks that the most despairing of 2013’s major films is also the most aesthetically nourishing. But The Great Beauty is a treasure in spite of itself, for the beauty of its faces, its bodies, its statues, its architecture, its music (Was that a Damien Jurado song? It was!), its rhythms, and its tender sense of humor.

As with the best films of Woody Allen, I’m grateful that this film exists, even if I would utterly disagree with the director about what makes it great. This is a case of the artist setting out to accomplish something, but being bested by his own Maker at every turn, for his own love of beauty inevitably contradicts his negativism… shot for shot.

You know what helps counteract this movie’s bitter tone? Imagining the angels from Wim Wenders’ Wings of Desire drifting through the streets of Rome, invisibly following each of Sorrentino’s characters — even Sorrentino himself — and quietly whispering of the love they’re all missing, the great beauty waiting to be discovered. 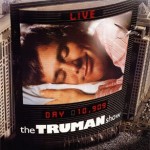 February 28, 2014 Is Groundhog Day the Most Meaningful Comedy Ever? Or The Truman Show?
Recent Comments
4 Comments | Leave a Comment
Browse Our Archives
Related posts from Looking Closer