Why Moviegoers Everywhere Must Learn to Say “Zvyagintsev”

Why Moviegoers Everywhere Must Learn to Say “Zvyagintsev” May 24, 2014 Jeffrey Overstreet 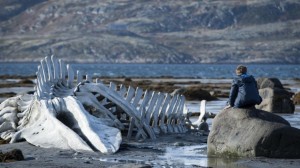 If you hear film buffs shouting “Zvyagintsev!” in the coming months, do not say “Gesundheit.” The proper response is this: “When do I get to see Leviathan?”

Congratulations to Russian filmmaker Andrey Zvyagintsev for winning the screenplay award at the 2014 Cannes Film Festival for his new film Leviathan (not to be confused with the documentary film by the same title that was in my top 5 favorites of last year). Having eagerly surveyed the critics’ responses to the films that played there, Zvyagintsev’s Leviathan is the Cannes contender movie I’m most excited to see in the coming year. In The Guardian‘s five-star rave, Peter Bradshaw says “Andrei Zvagintsev’s latest is a very strong contender for the Palme d’Or — a mix of Hobbes, Chekhov and the Bible, full of extraordinary images and magnificent symmetry.”

Sony Pictures Classics bought it, and here’s hoping they bring it to America right away.

Ten years ago, upon seeing Zvyagintsev’s first feature film, The Return, I said on this very blog, “Watching this film, it’s hard to shake the impression that you’re seeing the debut of a great artist. It’s too early to say if Andrey Zvyagintsev is one of the great filmmakers of our time. But the one film he has made deserves to be discussed in the same way we discuss work by Tarkovsky (The Mirror), Kieslowski (The Decalogue), and Bresson (Diary of a Country Priest).”

2004 was a year of cinematic discoveries for me. The three English-language releases that won my enthusiasm were Danny Boyle’s Millions, Pixar’s The Incredibles, and Michel Gondry’s Eternal Sunshine of the Spotless Mind. But the four films I enjoyed the most in 2004 were films I discovered for the first time, but that had already been revered as masterpieces for years. They were Robert Bresson’s Au Hasard Balthazar, the most unforgettable two hours I spent in a theatre; Bresson’s A Man Escaped, a similarly profound and challenging masterwork; Béla Tarr’s Werckmeister Harmonies, which is very difficult to find (I saw it thanks to a generous friend with a VHS copy); and Tokyo Story, the masterpiece by Yasujiro Ozu about family ties, respect for one’s elders, and the necessity of humility and love.

Looking around, I didn’t see any new 2004 releases that shared that kind of timeless poetry … except one: The Return.

Here are some of the first-impression notes I jotted down… 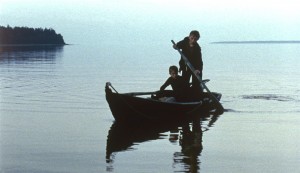 Watching this film, it’s hard to shake the impression that you’re seeing the debut of a great artist. It’s too early to say if Andrey Zvyagintsev is one of the great filmmakers of our time. But the one film he has made deserves to be discussed in the same way we discuss work by Tarkovsky (The Mirror), Kieslowski (The Decalogue), and Bresson (Diary of a Country Priest).

Great storytelling, excellent cinematography, a beautifully subtle soundtrack, sensational performances by three actors, a poetic script resonant with Biblical allusions — The Return is never indulgent, never superfluously stylish, and always convincing. That is what sets it apart from the handful of films I considered choosing as my top recommendation for 2004.

The story follows two brothers who must deal with the unexpected “return” of their father, a man they’ve never known. They try to take their mother’s word for it, but when the mysterious, quiet man takes them on a journey that morphs from fishing trip into a desperate and frustrating mystery, the brothers argue passionately over the man’s true identity and what he intends to do with them. Are they being led to their deaths? Is this a rite of passage into manhood? Is it a lesson in wilderness survival skills? What in the world is going on? 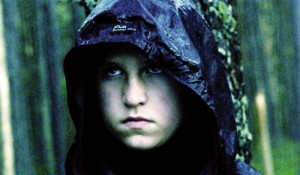 On a deeper level, the film leads us to ask questions about our own experiences with authority figures. Is it ever enough to just “trust and obey”? Is it arrogant for us to demand justification for the behavior or instructions of our elders? If there is a god, what is he like? Is it cruel for God to expect unquestioning obedience of us? Or is it his right? What is God really up to, and what is our part in his plan? Does he love us? Would he place us in danger unnecessarily, or has he ever demonstrated his love for us in any significant fashion?

The film ultimately feels like a lost Dostoyevsky novella brought to life. It powerfully echoes questions that have haunted spiritual seekers since … well … since God first told us not to mess with that blasted tree.

Like each episode of Kieslowski’s Decalogue, The Return is a small but potent story that never becomes preachy, didactic, simplistic, or dishonest. And yet it captures how good and evil work in our lives. It fulfills the highest rule of art: “Show, don’t tell.”

The relationships, the motivations, the decisions all goad us to see ourselves in these characters, and to abstract from the specifics into discussions of our impressions of God and our responses to him. 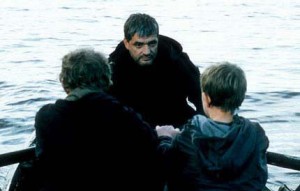 The conclusion is confounding, frustrating, and yet brilliant because it is specific to this story rather than merely an allegorical flourish. I was on the edge of my seat in those final minutes, worried that the film was going to become too obvious in its implications, rather than merely suggesting spiritual realities. Instead, the opposite occurred: The film arrives at a provocative conclusions that will get viewers talking and suggesting a variety of interpretations.

The two young actors, Ivan Dobronravov and Vladimir Garin, are extraordinary as the brothers who respond to their new father figure in starkly contrasting ways. I hope to see their faces again. Konstantin Lavronenko is perfectly opaque as the father — the role could easily have been overplayed to exploit our hopes or fears, but he remains mysterious, played with just enough particularity to be persuasively human, but remaining enigmatic enough to suggest archetypes of patriarchal authority from fathers to governors to God.

What resonates for me most in the film is not the theological implications of the father’s behavior, but rather the implications of what the two boys’ responses are to a fatherly authority figure. I can’t help but ask myself which brother I most resemble in my responses to authority figures… especially God. Am I Vanya, a suspicious doubter who wants to know whymy designs for the journey are so often frustrated in favor of some mysterious, larger purpose that remains beyond my reach? When I get angry and self-absorbed, God doesn’t put his plans on hold to wait for me to catch up and get excited about them. It’s up to me to engage with God at this point, because he’s gone out of his way to engage with me time and time again. Will I obey begrudgingly? Will I obey wholeheartedly? Those who do wholeheartedly obey without blinking … are they gullible fools, or are they just kissing-up to the Authority in order to be treated like the favorite son?

I’m already eagerly awaiting Zvyagintsev’s next film … just as I will eagerly await someone to tell me how to pronounce his name, so I can go around shouting it. 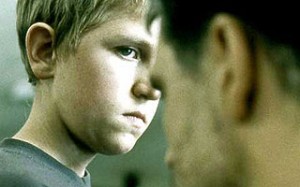 My friend and colleague Michael Leary wrote about the film for The Matthews House Project, pondering how the film sizes up to the work of Russian master filmmaker Andrei Tarkovsky. He wrote:

Tarkovsky’s films do deal explicitly with spirituality and psychology of certain cultural situations, but they do so with a social or historical realism that roots the spiritual revelations of his films within the unfolding of concrete, historicized realities rather than mythical ones. The Return on the other hand opts to be driven by overtly mythical overtones, and the strength of the film lies in Zvyangintsev’s uncanny knack for storytelling. He chooses simply to focus on his characters and their story instead of the culture of post-Soviet Russia, a theme which pervades much of contemporary Russian filmmaking.

For those who prefer their movies to offer neatly wrapped-up narratives, The Return won’t offer much of a return for the investment, but it’s possible to look beyond the melancholy story and appreciate the incisive character studies. The story suggests biblical dimensions of good and evil and the unwelcoming landscapes and choppy waters add to the thriller-like atmosphere of foreboding and dread that populate this chilly, enigmatic tale. 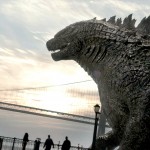 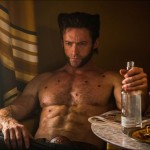 May 26, 2014 Confessions of an X-Men Ex-Fan [Revised]
Browse Our Archives
get the latest from
Entertainment
Sign up for our newsletter
POPULAR AT PATHEOS Entertainment
1