Looking Closer at When the Game Stands Tall 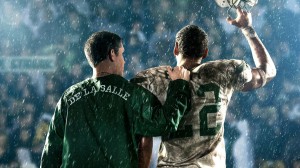 Evangelical culture loves its Christian celebrities, and few inspire more confidence and enthusiasm from that audience than the handsome professing Christian who suffered so much to play Jesus in Mel Gibson’s box office phenomenon.

And evangelical culture also loves sports movies — I suspect because sports stories fit so neatly into the evangelical Christian mindset: that the world can be divided into teams of winners and losers, and that they have the corrective lenses to show the world who the winners really are.

It’s a simple formula: Show that winning and losing is fraught with trouble if the game is played for the wrong reasons (for glory, for money, for self-gratification). Then show the athletes learning some Sunday school lessons about humility and teamwork. And once they’ve learned those lessons, then give the audience the satisfaction of seeing those who are In The Right achieve personal victories (reconciling the family, winning the virtuous but skeptical girl, overcoming the bullies)… and, usually, scoreboard victories as well. By affirming basic Sunday school lessons in a way that congratulates believers as winners, the formula is almost foolproof. It flatters Christians that they’re on the Winning Team — and it shows up unbelievers and misbehavers as being on the Losing Team.

It’s tribalism at its best.

Am I saying that When the Game Stands Tall is guilty of these things? No. I haven’t seen the movie. But “Christian entertainment” that fits my description has made me skeptical whenever another Faith Plus Sports movie opens… and there are so many of them.

If I sound cynical about the relationship between evangelical culture and sports, it’s because I am. I’ve seen the paradigm of sports used to corrupt Christ’s call to humility and servanthood. We are rarely left with the sense that following Christ is an experience of unanswered questions; of difficult faith (which is the assurance of things hoped-for, not achieved; the conviction of things not seen, rather than the conviction of certain triumph); of actual persecution instead of swift resolution; of suffering rather than fleeting difficulties.

This may make it sound like I simply hate sports and shouldn’t be writing about a subject I detest.

But it is precisely because of this — that I love the games so much — that I struggle with the way Christian culture so often buys into the problems with, rather than the real glories of, sport.

I’ve lost almost all patience for televised sports and movies about sports. Chariots of Fire remains a favorite, particularly because of the way it complicates the usual formulas, giving us two very different stories about two different runners, and examining the role that running plays in the lives of its enigmatic runners. What do we think of the runners’ motivations? What are we to make of their differing worldviews and religious beliefs? How are we to reconcile these two stories? Chariots of Fire is quite an exception to the rule — a movie with enough ambiguity to give viewers very different experiences. Most sports movies show such a lack of imagination, and such unwillingness to wrestle with questions that don’t have obvious answers.

Growing up, I loved striving to master the skills of basketball. I loved the chemistry of generous teamwork, the thrill of executing a beautiful play, the exhilaration that occurs when I team taps into some kind of magical momentum. I loved how the exercise made me feel so alive and awake. I loved the camaraderie that became possible among guys who otherwise had little in common. But many others seem to accept, endorse, and even embrace aspects of sports that poisoned the whole experience for me.

If I were making a film about high school, college, or professional sports, I would not gloss over the questionable aspects of sports culture that athletes and audiences tend to overlook. I would ask viewers to do more than cheer about good virtues and good guys. I’ad ask them to exercise the muscles in our skulls. I’d look closer at:

… and I’m just getting started.

Anyway, let’s just say I rarely see a film about sports that doesn’t throw fuel on the flames of my frustrations and disappointments. They all want to tell us that sports aren’t really about winning and losing, but how we play the game… and then the lessons that they do deliver are oversimplified and slogan-like. Further, the climactic moments of the film are often really about winning and losing and sending the audience out on an emotional high.

Sports films are also less than interesting when it comes to cinema. They usually mimic the frantic editing of pro-sports commercials, amplifying and glorifying the bone-jarring impact of physical collision, and framing athletes as if they are gods. They rarely give evidence that the artists have thought about the meaningful art of composition. Nathaniel Hawthorne wrote, “Nobody, I think, ought to read poetry, or look at pictures or statues, who cannot find a great deal more in them than the poet or artist has actually expressed. Their highest merit is suggestiveness.” Suggestiveness is the thing I find most lacking in sports films. If you can think of good examples to the contrary, by all means, share them! I’d be hard-pressed to think of a sports-related film that doesn’t deliver more of what the audience wants than what it needs, and that’s because sports culture tends to do the same thing.

So it comes as no surprise that the reviews for When the Game Stands Tall fail to intrigue me.

And these reviews, from some of the critics I regularly follow, do little to persuade me otherwise.

To fully understand what’s in store in the real-life football parable “When the Game Stands Tall,” it’s probably good to know that star Jim Caviezel’s most noteworthy film role was as Jesus in “The Passion of the Christ.” Turns out his ability to preach and sway his disciples comes in pretty handy as Bob Ladouceur … … His approach to the game, one that he has given most of his life to, is perhaps best summed up in a quotation from Matthew 23:13 that is recited onscreen: “Whoever exalts himself shall be humbled. And whoever humbles himself shall be exalted.” In other words, it is not about you, it is about others. All these sentiments are worthwhile, of course. And considering that De La Salle is a Catholic school and Coach Lad also was a religious studies teacher, they aren’t gratuitous. Still, most often in its early stages, the melodrama onscreen edges precipitously close to dissolving into a puddle of platitudinous pabulum served in the manner of a rote Sunday school lesson.

… the paradox at the heart of the sports-movie genre is that the game is its raison d’etre, yet most sports movies want to be about more than just the game. … Like many movie coaches, Bob is so committed to his work that he neglects his family, at least until a life-threatening crisis forces him to step back from coaching for a while. Then he has a moral epiphany: He has been a lousy husband and father. Perhaps if he’d ever watched any sports movies, he might have seen that coming. … The film insists that there’s more to life than football. Yet the players urgently tell one another, not only at the outset, but even at the climax, “No matter where we go or what we achieve, nothing is going to come close to what we have here.” The idea of life climaxing at high school is depressing enough; more importantly, it undermines the movie’s bid for larger themes.

Scott Tobias for The Dissolve writes:

… while discipline and self-control certainly figure into Ladouceur’s teachings, there’s also a passion and drive that’s totally absent from Caviezel’s performance. It’s not that the film needs any more goosing — it’s broad and shameless even by inspirational-sports-movie standards—but its basic lack of plausibility starts with him. … When The Game Stands Tall mostly sticks to the idea that moral character and determination, rather than talent and tactics (and scheduling), explain why Ladouceur and De La Salle succeeded on such an unprecedented scale. That strain of magical thinking is a curse to sports—and to movies about them, too.

But Mark Moring, who was my editor for several years when I wrote reviews for Christianity Today, stands up for the film:

… this is no mere cheesy Christian movie with an “evangelistic agenda.” It’s a very good inspirational sports movie reminiscent of those that Disney has done so well — like Remember the Titans (2000), The Rookie (2002), Miracle (2004), Invincible (2006), Secretariat (2010), and this year’s Million Dollar Arm. Part of what made all of those films so enjoyable was knowing that they’re true.

August 15, 2014
The Flood Hits Home Video: Give Noah a Chance
Next Post

August 25, 2014 Critics Vs. Audiences: Whom Shall We Trust?
Recent Comments
10 Comments | Leave a Comment
Browse Our Archives
Related posts from Looking Closer

10 responses to “Looking Closer at When the Game Stands Tall”