Looking Closer at The Hundred-Foot Journey 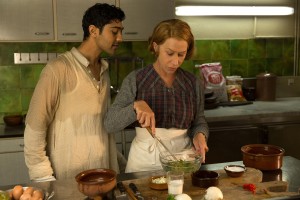 As I joined the line to buy tickets for a mid-afternoon matinee showing of Guardians of the Galaxy, I had a rare and unsettling experience. A large crowd had assembled at the ticket counter, and I quickly discovered that these moviegoers had come for the opening-day matinee of a movie that I did not know existed.

Somehow, I had failed to notice any promotional effort at all for Lasse Haalstrom’s The Hundred Foot Journey.

I was surprised. I used to be a fan of Haalstrom. My Life as a Dog was a charming coming-of-age story, and What’s Eating Gilbert Grape? remains one of my favorite films. But the last several films from this director have seemed like a major lapse into sentimentality and emotional manipulation. I enjoyed the fairy-tale whimsy of Chocolat — mostly because it was a joy to see Juliette Binoche reunited with Lena Olin on the big screen — but I can’t say I’ve been tracking his progress with much excitement.

This crowd was buzzing. And as I got in line, I noticed several friends of mine emerging from an even earlier matinee, and they were very happy moviegoers. They’d loved the film.

No offense to my friends — I’ve enjoyed many of their recommendations before. But I rarely trust what anybody — friends, colleagues, favorite critics, even myself — has to say about a movie if they’ve only just walked out of the theater. So often, our opinions change in the hours and days after seeing a movie, because we have time to think, to reflect, to discuss.

So I began watching for my favorite critics to weigh in with the impressions they’d crafted in the days after seeing it… and only of a few of them did.

I found these words from that most respectable of contemporary critics — A. O. Scott in The New York Times:

There is a lot of soft-core culinary montage in the movie, directed by Lasse Hallstrom with the easygoing blend of elegance and vulgarity that has been his signature at least since “Chocolat.” Eggs are cracked in slow motion and whisked to the sounds of A. R. Rahman’s transnational airport music score. Vegetables are chopped with melodramatic frenzy. Tomatoes fairly burst in the golden sunlight of southern France. Words like “cèpes,” “garam masala,” “écrevisses” and “tandoor” are uttered with almost erotic intensity. And yet “The Hundred-Foot Journey” is likely neither to pique your appetite nor to sate it, leaving you in a dyspeptic limbo, stuffed with false sentiment and forced whimsy and starved for real delight.

Then this, from Variety‘s Justin Chang, whose discernment I tend to trust:

Shot on 35mm in luminous, sun-dappled tones in the French village of Saint-Antonin-Noble-Val (with some second-unit work in India), and handsomely appointed by production designer David Gropman and costume designer Pierre-Yves Gayraud, the film is also distinguished by its mouth-watering visual buffet, whether lingering on vats of steaming red curry or a perfectly plated pigeon with truffles. This is, no question, an easy picture to succumb to — perhaps too easy, if its tidy narrative symmetries and its belief in the socially redemptive power of pleasure are any indication. Scrumptious as it all is, it hurts to watch chefs so committed to excellence in a movie so content to settle for attractive mediocrity.

At RogerEbert.com, Christy Lemire was direct in her criticism:

… despite being handsomely crafted, well acted and even sufficiently enjoyable, “The Hundred-Foot Journey” is also conventional and predictable. And for a film that’s all about opening up your senses and sampling spicy, exotic tastes, this comic drama is entirely too safe and even a little bland.

I found a more admiring take at Vulture, from Bilge Ebiri, whose views I frequently seek out, saying:

Ultimately, what comes through most forcefully in The Hundred-Foot Journey is the longing of the immigrant, the overwhelming push-pull between the need to belong and the need to assert one’s own identity. That the film is set in France, a country where the native culture presses hard, raises the stakes in interesting ways: We see how a genteel pride in the refinement and supremacy of one’s own culture can easily be nudged into overt racism. The film doesn’t dwell on these points — it’s not here to agitate, it’s here to comfort and cajole — but the fact that it even allows them into its otherwise prim and cozy narrative gives it a welcome kick.

In a brief note at Letterboxd, Scott Renshaw wrote:

… it is possible to roll one’s eyes at a story’s silly manipulations and still find it hard not to respond to those same silly manipulations. … Yes, everyone learns important lessons—including viewers who can appreciate that a movie cheesier than French cuisine can still be somewhat tasty.

What I really wanted was a review from Steven D. Greydanus (or “SDG”), who writes for Decent Films and The National Catholic Register. Alas, no full review appeared. But I did find him saying the following in a post at Arts and Faith:

I wanted to like The Hundred-Foot Journey better than I did.

It has themes and vibes I usually enjoy. It has elements I actually enjoyed. Mirren and Puri are both great to watch, and the young people are enjoyable and easy on the eyes.

But the level of deliberate calculation and manipulation ultimately undid it for me.

Too many gooey Life of Pi cliches: “Sea urchins taste of life. Life has its own flavor.” “Food is memories.” “To cook, you must kill. You must make ghosts…spirits that live on in every ingredient.” “In this restaurant, cooking is not an old, tired marriage. It is a passionate affair.” “You cannot be nervous and make a sauce hollandaise. The eggs will feel it, and they will separate.”

Too much bogus conflict. Characters getting agitated and shouting at each other when the circumstances don’t seem to warrant it. Are we really supposed to imagine a world-class French chef like Mirren in 2014 holding such a contemptuous attitude toward Indian cuisine?

Yet for all the bogus conflict, and the characters with not-always-convincing flaws, our hero is morally unimpeachable and as supremely gifted as Harry Potter. Everything comes to him without effort, he makes no mistakes and never struggles.

In the end, unconvincing small-town nostalgia. The big-city world of haute cuisine, where cooking is “not an art, but a science.” The “beast with a thousand mouths.” Yet in this world of cooking science they haven’t figured out the small-town locations where the best mushrooms grow?

And I’m at a point in my life where, if I’m watching a movie set in France, I’m no longer content to listen to French-accented English.

So… you tell me: Does this sound like a film which I should spend time and money to see? I’m inclined, at this point, to wait until it shows up on Netflix. Better yet, I might just spend an evening going back to the feasts that never disappoint. That Criterion release of Babette’s Feast, for example. Why settle for less?

September 26, 2014 The Song "Shares the Weaknesses of Most Faith-Based Films"
Recent Comments
2 Comments | Leave a Comment
Browse Our Archives
get the latest from
Entertainment
Sign up for our newsletter
POPULAR AT PATHEOS Entertainment
1

2 responses to “Looking Closer at The Hundred-Foot Journey”