A New Christendom Fails to Challenge the State

A New Christendom Fails to Challenge the State   May 13, 2019 Jack Hartjes

My last post on Chapter Three of Torture and Eucharist saw William Cavanaugh’s exposition and critique of Catholic Action. This was the early- and mid-20th-century response of the Church to new, secular, social and political realities. It grew out of a vision of the Church as a New Christendom. In the former Christendom the Church had wielded more secular power than modern states could tolerate.

Catholic theologians, like Jacques Maritain, whom I knew as a leading voice in the pre-Vatican II Church, laid the theoretical foundations for this New Christendom. They welcomed the modern movement toward de-sacrilizing the state. It left the Church free, presumably, to operate in its area of expertise, the things of the spirit. The state would take care of bodily needs and leave the soul to the Church. The state would be competent in its realm, but – so the thinking went – that realm was subordinate to the spiritual. Maritain envisioned two planes, with the spiritual above the material as the eternal transcends the temporal.

On Chapter Four of Torture and Eucharist: Theology, Politics, and the Body of Christ. Seventh in the series on William T. Cavanaugh. He is a Catholic theologian who writes about the Church and its role in culture, politics, and economics. Introduction to Cavanaugh and links to blogs in the series as they appear are here.

That Cavanaugh takes the well-respected Jacques Maritain to task, even if respectfully, surprised me. Cavanaugh says he drew the Church out of one false self-image and into another. With Maritain, among others, the Church correctly forswore its earlier direct involvement in the matters of the state. Unfortunately, in Cavanaugh’s estimation the Church gave away too much.

The Church would form the consciences of Christians. They would take that morality into politics, the workplace, the family, and every other stage where life is lived. The Christian influence would be through persuasion, reasoning toward positive, secular goals with secular, not theological, arguments. That was thought to be only fitting for the laity, whose expertise was, supposedly, in secular, not spiritual affairs. Their job was to realize, not the Kingdom of God on earth, but the temporal, secular common good. (p. 170)

For many in Latin America, who became aware of the Bible’s and the Church’s commitment to social justice, it was a progressive stand. More accurately, however, the supra-political stance of the Church, its self-described lack of competence in worldly affairs, could turn to the advantage of whoever was in power. By the 1960’s liberation theologian Gustavo Gutierrez claimed the New Christendom was only upholding the status quo. (p. 178-79) When that status quo became diabolic under Pinochet, the Church, having given up so much bodily territory to the state, found it hard to respond.

Church as body and ‘contrast society’

A true understanding of the Church, Cavanaugh says, does not give territory away as the New Christendom did. The Church is a social body in its own right and a “contrast society” in the face of the state. (p. 180) The Church has

its own bodily performances, its own “politics,” its own set of social practices which are neither purely otherworldly nor reducible to some “purely temporal” discourse.” (p. 181)

A traditional saying has it that the Church is “in the world but not of the world.” Maritain, says Cavanaugh, tended to see the Church as neither in nor of the world but dwelling in souls, the realm of the spirit. Really, the Church is both in and of the world if “of” means composed of the world’s stuff. In the usual translation, Jesus says, “My kingdom is not of this world.” But a better translation is “not from this world.” In Cavanaugh’s words, “Jesus’ kingly authority comes from God.” (p. 184) Far from separating salvation from efforts to change the world, God’s authority challenges worldly authorities.

Human rights and the Gospel

Human rights became an important theme in the 20th century, and the Church found that the Gospels “inspire” the push for human rights. But that human-rights language had “little apparent effect on the Pinochet regime.” (p. 187) And the Church had difficulty convincing regime apologists that it should have more. Cavanaugh explains:

That is, not from some soul-like recesses of each individual. If the Church lives only in the interior of the soul, then only the state is left to be that right-establishing community.

Jesus’ conflict with the Pharisees over paying tax to Caesar confirms that the Kingdom of God is more than an interior disposition of the soul. How, otherwise, could there even be a conflict? One of the ways Maritain goes wrong is in paying almost no attention to the actual incarnational, in-the-body and in-the-community life of Jesus. (p. 185)

Freedom of Religion and Catholics in Enlightenment England

One consequence of the Enlightenment in England was the recognition of the human right to have one’s own religious beliefs. John Locke, whose political theory greatly influenced American Democracy, proposes

… that the state cannot coerce religious belief because it is a matter of the internal conscience. But for the very same reason he flatly denied the social nature of the church…. (p. 191)

Interestingly, Catholics did not share in this freedom of religion. The Toleration Act of 1689 excluded Catholics “because they had as yet refused to interiorize the church and transfer their ultimate loyalty to the sovereign.” (p. 192)

Catholics at that time were still a risk to the state, and state-sponsored human rights are tied to the states’ own security. When the state manages to interiorize the Church, or the Church interiorizes itself, the risk from the Church disappears. Maritain declares that the Church’s plane is higher than the states and the only true sovereign is God. But

once the church has been individualized and eliminated as Christ’s body in the world, only the state is left to impersonate God. (p. 193)

From New Christendom to where?

Chile in the Pinochet years is an especially hideous example that explains why a Church that is only the soul of society fails to be even that. The answer is not a return to the old Christendom and a Church that exercises the physical, coercive power typical of states. The Church

… must reclaim not only its body but its soul from the state, and institute a discipline which is truly Christlike – a power based in compassion and martyrdom, suffering and reconciliation.” (p. 197)

The Church’s disciplines, including the sacraments and good works, are peaceful soul-body practices that can counteract the violent soul-body practices of the state. In this way the Church enacts the Body of Christ. That is the subject of Cavanaugh’s next chapter. One of the things I learn there is to distinguish “True Body” from “Mystical Body” as they relate to the Church and the Eucharist. 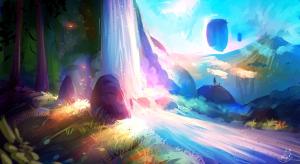 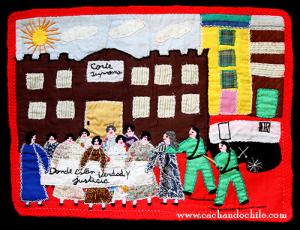 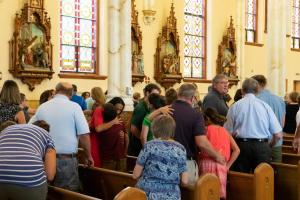