Offertory vs. Preparation of the Gifts: When does the Offering of the Mass happen?

The second main part of the Mass, the Liturgy of the Eucharist, begins with what we used to call the Offertory. The imaginary space visitor whom we’ve met in this series remembers that word from a previous visit back in the 1950’s. She was puzzled then. There didn’t seem to be much of an offering going on. Servers carried so-called gifts, mere bread and wine, to the altar. The priest made a kind of fuss over them. But there they stayed. Nothing actually happened to them, at least not at this part of the Mass.

This is the seventh in a series on the Mass. I’ve been letting the various actions and experiences of the Mass speak their meaning to an interested, theologically untutored, and so quite observant space alien. I’m finding that she pays a lot of attention to things we tend to take for granted or even interpret wrongly.

At the moment this visitor notices that the name Offertory has changed to “Preparation of the Gifts.” That makes more sense to her, but I wonder if most of the rest of us have caught the significance of the change. I was present at a liturgy workshop in the mid-1970’s, ten years after the beginning of the liturgical reforms. The presenter asked us, “When in the Mass does the offering occur?” Priests and lay leaders alike thought it was “at the Offertory.” – Wrong! I pictured in my mind the priest raising host and chalice up as high and as close to God as he could and piped up, “At the Consecration.” – Wrong again!

We’ll get the right answer, but, first, about that old name “Offertory.” It seemed to say: W make our little sacrifice, offering God gifts of bread, wine, and money in the collection basket; later Jesus responds way out of proportion to our small effort. He puts his whole infinite self at our disposal in the forms of the bread and wine. But truly the only offering to God is what Jesus accomplishes. God’s gift to us in no way depends on our gifts to God.

The Preparation of the Gifts is a minor rite now. The prayers are shorter and more in tune with what’s actually happening. The priest no longer says as in the old Offertory:

Receive, O holy Father, almighty and eternal God, this spotless host, which I, Your unworthy servant, offer to you ….

And, after another long prayer,

We offer You the chalice of salvation, Lord ….

Today the priest doesn’t claim to be offering anything at this part of the Mass. The words are:

Blessed are you, Lord God of all creation. Through your goodness we have this bread/wine to offer…. It will become our spiritual food/drink.

This preparatory rite is like cooking and making ready at home before the guests arrive. We, the people in the pews, do some of the preparations, carrying bread and wine forward to the altar. That’s a welcome switch from just having servers carry them from one table in the sanctuary to another.

Actually, we only bring the gifts near the altar. The priest and servers, with perhaps a word of thanks, receive the gifts there and carry them the rest of the way. The people’s work is not honored as well as it might be by this seemingly polite “Thanks, I’ll take it from here.”

That preparatory rite is not a time of offering to God. Our space visitor doesn’t see that the gifts of bread and wine are destined for God at all. The new words “It will become our spiritual food/drink” indicate that she might be right. But it’s necessary to think again about what Jesus was doing on the cross, which the next part of the Mass, the Eucharistic Prayer remembers.

In the past it seemed to me that the most important part of the Mass was the Consecration in the middle of the Eucharistic Prayer. I was awestruck by the words the priest, echoing Jesus at the Last Supper, said: “This is my body…. This is the chalice of my blood….” We didn’t quite worship the words, but we tiptoed around them for fear that a priest might carelessly or maliciously utter them while walking past a bakery or wine shop.

In the previous paragraph I left out parts of what the priest and Jesus said. Here are the words of the Consecration in full:

Take this, all of you, and eat of it,
for this is my Body,
which will be given up for you.

Take this, all of you, and drink from it,
for this is the chalice of my Blood,
the Blood of the new and eternal covenant,
which will be poured out for you and for many
for the forgiveness of sins.

Still, the whole Eucharistic Prayer is an offertory, an offering to God. The prayer’s climactic ending sums up the essence of that offering:

Through him [Christ], and with him, and in him, O God, almighty Father, in the unity of the Holy Spirit, all glory and honor is yours for ever and ever.

Our “Amen” signals our willing participation in Jesus’ offering of all praise to God.

Praise in the form of a life of perfect obedience, even extending to the cross, is what Jesus offered to his Father. If our theologically untutored space alien had been there at the crucifixion, she would have seen what the Romans and a few Jewish leaders got out of this offering—Jesus’ body to abuse and destroy. In their contest with Jesus, they were the winners. She might also have noticed that they didn’t win very much. The honor and bragging rights that usually accrue to a winner are missing here. They didn’t get to take Jesus’ life with their overwhelming power. Jesus disrupted that process by not entering the fight at all.

The Roman Empire got Jesus’ suffering and death, but it did not get what empires always want. What empires want and what they need to survive is exactly what Jesus gave to God alone. Empires want our lives to control, our awe in the face of their almighty power. They want the grudging or willing esteem that hopeless and bowed down people give to tyrants. They want our worship. All of that is what Jesus, and after him subversive early Christian martyrs, gave only to God.

In the next post in this series we’ll see what our space visitor makes of the phrase “all glory and honor” in the Mass’s great offering. She sees how that offering to God leads, without a moment’s pause, to the high drama of the Mass—our reaching out, in Communion with God and each other, across our many divisions that depend on the petty honors that we would, except for Jesus, keep for ourselves or offer to our favorite lesser gods.

December 6, 2019
Preeminent is Not the Same as Most Urgent
Next Post

Boom: how one priest transformed a...
The Deacon's Bench
Related posts from Lost in a One-Acre Wood

Catholic
“Ite Missa Est” – Go the Mass is...
Lost in a One-Acre Wood 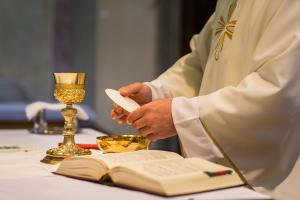 Catholic
The Communion Rite, the Dangerous Work of the...
Lost in a One-Acre Wood 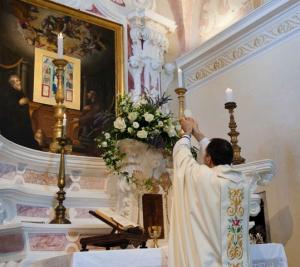 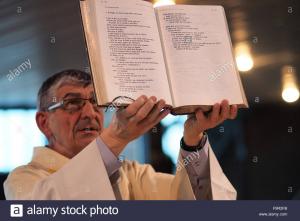 Catholic
The Liturgy of the Word: More than Listening
Lost in a One-Acre Wood
TRENDING AT PATHEOS Catholic