Altar call: A tradition in some evangelical Christian churches in which those who wish to make a new spiritual commitment to Jesus Christ are invited to come forward publicly. – Wikipedia

Billy Graham: You cannot give God a definite maybe.

Compared to Catholic Church history, the altar does not have a long tradition in Christianity. Its origin dates only to the 19th century with Charles Finney, Dwight Moody, and Billy Sunday. It can be manipulative, stress emotion over solid commitment, even present itself as the only way to Christ. Evangelicals have criticized altar call practices for all these psychological and theological errors. Still the altar call is a much-loved feature of many evangelical services. Looked at from the outside, the sight of individuals or a crowd coming forward to confess their being lost and to follow Christ is impressive, to say the least.

What does this have to do with Catholics? Well, we Catholics have a rite in the Mass that is just as visually impressive as a Protestant altar call.

I like to think of Communion as our altar call.

In several previous posts I imagined a visitor from space observing our liturgical celebrations. She provided a point of view that made it possible to see anew many of the things we do at Mass. Now, one last time, imagine taking the viewpoint of that visitor.

I imagine understanding at least some of what is going on. I can see a group of people doing something important and doing it together. They are walking together, even singing together (at least in my imagination).

I remember the lead-up to this togetherness in first parts of the Communion Rite. How the people gave praise to one they called Father, who forgives “as we forgive” each other. They reached across to each other in a sign of reconciliation and peace. Bread was broken, as if one “loaf” was going to feed the multitude and make the many one. I imagine trying to understand that part and not quite succeeding. It’s the reverence so visible in the ceremony that tells me (the visitor, I mean) there’s something I don’t understand.

I was unhappy when the American bishops instituted the practice of bowing before receiving Communion. Now, having practiced this symbol for 14 years (if my dates are right), I have different take.

What disturbed me most about the introduction of this practice, was the emphasis on reverence. It was as if we weren’t really reverent before. For six weeks our diocesan newspaper educated us in the new way of receiving Communion. It seems like a lot of instruction for a simple bow. It really wasn’t a lot because the same theme came back over and over – we had to be more reverent.

I’m sure I would have been happier if the bishops had come out with the obvious truth. The Communion Procession is a reverent act by the People of God, who desire to receive their Lord in Communion. The bishops could have praised the vast majority of faithful churchgoers for their faith and their reverence. They could have stressed that processing toward the altar and standing with hands outstretched to receive, not take, are themselves reverent and highly symbolic actions.

The bishops might then have explained that all these actions are consistent with what Catholics believe about the Eucharist, but they don’t really say enough. In fact, as I now see it, they are also consistent with symbolizing our unity on a merely human level. A bow will express in an obvious way the divine element in this climactic action of the Communion Rite.

While learning this new element, the bow, many of us learned it wrong. I see people making a deep bow before they get to the front of the line. They bow toward the back of the one in front of them—to save time, I think. It must have been priests in a hurry who made up that rule.

In our minds we know Whom we mean to bow to. But why must our bodies say something else? How confusing for our poor space visitor!

My liturgical wish is that people bow the way the rubric says. That is not a deep bow but just a bow with the head. It takes almost no time. And the time it does take is available if the priest does his job properly. I mean that the priest can’t be in a hurry. That’s a second liturgical wish.

The priest in a hurry says “The Body of Christ” just as he puts the host into the communicant’s hand. One can’t even say “Amen,” much less bow, before it’s time to move on. Those six lessons on receiving Communion should have instructed the priest about his job. That is, the priest holds the host up while saying “The Body of Christ.” The communicant both sees and bows to Jesus present as bread. She looks up to say, “Amen,” and the priest places the host into her hand.

The communicant steps to the side, consumes the host, and turns to go to the chalice or the pews. That’s a third liturgical wish. If there’s anything irreverent about the Communion procession, it happens after reception. People are intent on getting back to the pew, not pausing but consuming the host on the way. They’re not thinking the pew is more important, but their bodies say it.

The presence of Jesus and some vocabulary

As a Communion minister and holding the cup, I sometimes see people who choose not to receive from the cup bow before they pass by. I think that’s appropriate. I also think it’s appropriate when I bow back to them. This is a great mystery of our faith. The natural course, when we eat something, is that the food becomes us. But when we consume the Eucharist, as the song says, we become what we eat.

The presence of Jesus raises the question of what vocabulary to use when we refer to the Eucharistic elements. One Eucharistic minister insists that we should not say either bread or wine after these elements have been consecrated. They are the “body” and the “blood.” That’s correct, although it ignores our belief that the whole Christ is present in both forms. It’s not like we receive the body and then the blood. It would be a dead Jesus if that were the case.

Here’s what I learned some time ago:

A final word about the word “chalice.” Jesus did not perform the Last Supper in a cathedral with fancy dinnerware. The Bible says he took a cup. Cup is the ordinary translation of the Latin “Calyx.” “Chalice” in the new translation of the words of institution is a attempt to gain solemnity with an impressive word. It doesn’t succeed. 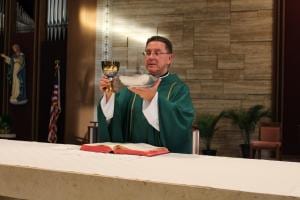