In Luke’s Gospel three would-be followers of Jesus find that they have to pass a test to qualify for that position. Their stories in Luke 10:57-62 feature three of Jesus’ odder sayings. They range, seemingly, from just puzzling to unduly harsh to downright mean. It sounds like Jesus is giving these potential members of God’s army the brushoff. Why? This post follows Kenneth E. Bailey’s answer to that question.

Third in a series in which I investigate social justice in the Gospel of Luke. For assistance I rely mainly on two Bible scholars. Kenneth E. Bailey in Poet and Peasant and Through Peasant Eyes interprets Jesus parables in Luke. John Howard Yoder’s The Politics of Jesus helped Christians recognize Jesus’ concern for social justice, paying special attention to the Gospel of Luke.

Social justice isn’t immediately apparent as a theme for these three stories. But then we’re not familiar with the culture in which Jesus and his hearers grew up. The virtue of Bailey’s work is that he made investigating that culture part of his life’s work. That has included time spent with ethnic groups that still retain essential parts of that ancient way of life. By ourselves we can see Jesus breaking from expectations in some surprising, to us incomprehensible, ways. Bailey draws back the veil between cultures and helps us see more clearly. Membership in God’s army isn’t going to be easy.

Jesus, some disciples, and apparently a further miscellaneous group were heading down the road toward Jerusalem. (I wonder if that destination is a sign to Luke’s readers that danger lies ahead.) Jesus converses with three in this crowd. The first and third initiate their dialogues. They are the volunteers of the title of this piece. Between these two is one whom Jesus calls out of the blue. He’s the recruit. And here are their stories:

One of the crowd walking along with Jesus says, “I will follow you wherever you go.” Jesus’ first odd saying follows:

Foxes have holes, and birds of the air have nests; but the Son of Man has nowhere to lay his head.

Jesus calls another: “Follow me.” But he says, “Lord, first let me go and bury my father.” Jesus’ second odd saying:

Let the dead bury their own dead; but as for you, go and proclaim the kingdom of God.

Another says, “I will follow you, Lord; but let me first say farewell to those at my home. And Jesus’ third odd saying:

No one who puts a hand to the plow and looks back is fit for the kingdom of God.

Puzzling? Cruel? Unduly harsh? I will take a look at these three incidents that Luke has gathered in a short paragraph one at a time.

Jesus warns our first volunteer that following him will be difficult. He’ll be lucky if he has more than the bare ground to “lay his head.” But is that all? Bailey takes a close look at the two contrasting “groups” – that is, foxes and birds of the air. (Through Peasant Eyes, p. 24-25. All of the references to Bailey’s work in this post are from Through Peasant Eyes.)

The “fox” was a symbol for foreigners living in the land of Israel. Herod’s family was part foreigner. Jesus called Herod Antipas “that fox.” (Luke 13:32) The “birds of the air” in then-current apocalyptic literature referred to the Gentile nations. Bailey quotes T. W. Manson on Jesus’ use of these two symbols:

[E]verybody is at home in Israel’s land except the true Israel. The birds of the air [Roman overlords], the foxes [the Herods] have made their position secure. The true Israel is disinherited by them. And if you cast your lot with me and mine you join the ranks of the dispossessed… (p. 24-25)

The “political overtones” of Jesus’ sayings, Bailey says, often pass unnoticed. But in the Middle East “every religious breath has political overtones.” And oppressed people can’t voice their politics openly. “They must talk their opposition in symbols.” (p. 25)

Luke’s story doesn’t say what the outcome of Jesus dialogue with the first volunteer is. Did he follow Jesus or did he choose the safety of the foxes and birds of the air, the powers that be? Since Luke doesn’t end the conversation, we have to end it with our own response. Is membership in God’s army for us?

It seems like a reasonable request that the recruit makes. To us Jesus’ answer, “Let the dead bury their own dead,” seems both mean and rude. This is where Bailey’s research among cultures of the Middle East pays off.

To an Arab of the Middle Eastern culture, it’s obvious that the recruit’s father has not died and probably won’t for some time. Ibn al-Salibi, writing in the 11th century says, “If the father had really died, why then was he [the recruit] not at that very moment keeping vigil over the body of the father?” (p. 26)

“To bury one’s father” is a traditional phrase still in use in some places. It means much more than it says. Today an Arab contemplating emigrating might hear, “Are you not going to bury your father first?” It means, “Won’t you stay until you’ve fulfilled your duty to take care of your parents until they die?” In Lebanon an older person might compliment a younger by saying, “You will bury me my son.” It means, “I think so much of you that I hope you will be the one to care for me in my old age.” (p. 26)

Bailey paraphrases the recruit’s wish to bury his father: “Surely you do not expect me to violate the expectations of my community?”

But, says Bailey, “This is precisely what Jesus requires. (p. 27)

Again it seems that this supposed volunteer for God’s army has a small request. Such a reasonable precondition Jesus could easily accept. “I’ll follow you. Just let me go home and say my farewells.”

Bailey analyzes the Greek word that most modern translations, including my favorite two, render as “say farewell.” Elsewhere in the New Testament, when this word appears, the translation is more often “take leave.” Bailey thinks this volunteer is asking to “take leave” not just “say good-bye.” In Middle Eastern culture there’s a big difference.

In that culture, “The person who is leaving must request permission to leave from those who are staying.” Those who are remaining may grant permission with something like “May you go in safety” or “God go with you.” (p. 28) Today even an urban professional in the Arab Middle East will make the traditional visit to his rural father “to ask permission for foreign travel, or a change of job, or an important business venture.” The trip may be only ceremonial, but it’s an important sign of respect. (p. 29)

Bailey notes that everyone listening to the dialogue between Jesus and the “volunteer” of the story knows that “naturally his father will refuse to let the boy wander off on some questionable enterprise. Thus the volunteer’s excuse is ready-made.” (p. 27-28)

Theologically, the passage attributes to Jesus’ dialogue partner this sentiment, in Bailey’s words:

I will follow you, Lord, but of course the authority of my father is higher than your authority….

Luke’s theology, of course, says that Jesus has the higher authority. Bailey reports witnessing “the stunning shock that comes to a Middle Eastern reader/listener when the reality of the demands of this text are made clear.” (p. 29)

Luke’s artistry and the point of these stories

Luke’s arrangement of these three episodes, I think, is deliberate. Tension and even antipathy build between the worlds inside and outside the Kingdom of God. You see it when you guess how the three would-be members of God’s army might respond. With the first prospect we’re merely in doubt. Jesus gives some unwelcome information about how difficult following him will be. It may be too discouraging, but the volunteer may fire up and take on the challenge. The second, Jesus’ recruit, thinks about answering the call but figures out a way to postpone his response almost indefinitely—until he buries his father, who is still very much alive. The third story is about a “volunteer” who isn’t volunteering at all. He puts on a good show, but he knows he’s safe. His family will never let him go off and join some God’s army led by the likes of Jesus.

Jesus’ last saying, about the plow and looking back, intends to show just how important in God’s Kingdom is total commitment to the task at hand. Steering the cow with a six-foot goad in one hand and, with the other, guiding the plow, regulating its depth, and occasionally lifting it over rocks required dexterity and total concentration. (p.29) Just like that are the all-consuming demands of the Kingdom of God.

Add to that the prospect of following a leader whom society rejects, who takes a place alongside all the rejected ones with “nowhere to lay his head.” Then consider the conflict when one’s implicit beliefs and values are called into question. Suddenly, confoundingly a new life option makes the old look like the dead burying their dead.

The stories aren’t about social justice, only about the world turning upside down as it will when justice becomes real. When the mighty fall from their thrones and the lowly rise. When the rejected One lifted high on a cross becomes the new center of reality. 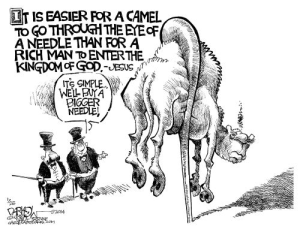 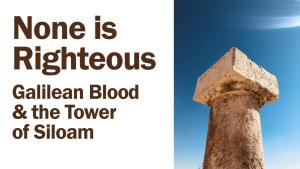 Catholic
Righteousness – In Luke It’s More than Being...
Lost in a One-Acre Wood 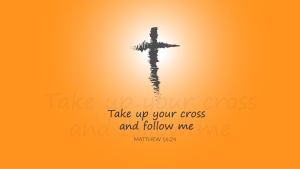 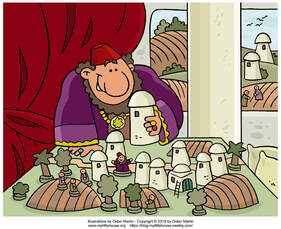 Catholic
The Rich Fool and the Rent We Pay...
Lost in a One-Acre Wood
TRENDING AT PATHEOS Catholic