Does the Bible Matter? Progressive Christians and Scripture 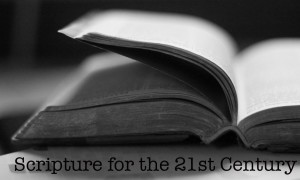 There is an obvious reason: we disagree with much of the most publicly visible form of contemporary Christianity. Commonly called “conservative” Christianity, its political form is “the Christian right.” Thus we tend to define ourselves with a series of negations that differentiate “us” from “them.” We don’t believe what they do.  We’re not like them.

At the heart of the disagreement is the Bible. For conservative Christians, two claims about the Bible are foundational. First, it is inerrant and/or infallible. Though some argue that inerrancy and infallibility are not identical, the differences are at most subtle. Functionally, they have the same effect: if the Bible says something, it’s true. That settles it.

Second, the Bible is to be interpreted literally. The most obvious example: about half of American Protestants believe that creation happened less than 10,000 years ago.

Given the overwhelming evidence that the earth and life and the universe are much older than that – from geology, astronomy, physics, paleontology, biology, archeology, anthropology, and more – why do they think that? Because they belong to churches that teach biblical literalism, mostly independent Protestant churches (that is, those that are not part of “mainline” denominations – though a “soft” form of literalism is somewhat common among “mainline” Christians as well).

Often this is implicit rather than explicit. It would be salutary if it became boldly explicit. If more Christians – and ideally all – were candidly to acknowledge that sometimes the Bible is wrong, it would change the discussion of biblical authority.

So also there are compelling reasons for rejecting biblical literalism. There is, of course, the conflict with generally accepted modern knowledge. Beyond that, why should we imagine that God speaks only in literal-factual language? Is God a literalist? Why cannot God speak in the language of poetry, metaphor, and myth?

To use specific examples, why should we interpret the Genesis stories of origins literally when they are far more powerful and truthful as metaphorical narratives? Or what would it mean to take a phrase like “the right hand of God” literally? Does God have hands? And a right side and a left side? Literal interpretation of the Bible as a whole is literally impossible.

But it is often less clear what progressive Christians do affirm about the Bible. There is, so far as I know, no “official” statement. So I share my affirmations.

I begin with a favorite hymn about the Bible that goes back to my Lutheran childhood. Written by a progressive Danish Lutheran pastor in 1817 and sung to the tune of “A Mighty Fortress Is Our God,” the first line affirms: God’s Word is our great heritage, and shall be ours forever. Then:

To spread its light from age to age
Shall be our chief endeavor.
Through life it guides our way,
In death it is our stay.
Lord, grant, while worlds endure,
We keep its teachings pure.
Throughout all generations.

To all of that, in my senior adulthood, I say Amen.

The Bible is “God’s Word.”  As such, it is Christian sacred scripture.  So our spiritual ancestors in ancient Israel and early Christianity declared this collection of books to be. But this does not mean that it is “the words of God.” The equation of “the Word of God” with “the words of God” is not only linguistic legerdemain but a serious theological error. It is also recent, primarily the product of a particular stream of Protestantism.

The Bible is our “great heritage.” It is for Christians our inheritance, passed down to us from our spiritual ancestors in ancient Israel and early Christianity. In it, we hear their voices: their stories and wisdom, their praise and prayer, their grief and lamentation, their convictions and hopes. It also contains their limited understandings, their acceptance of cultural conventions, their desire for triumph over enemies and revenge against oppressors. That is why it is sometimes wrong.

The Bible is about the dream of God. Its overarching narrative is about God’s dream, God’s passion, for transformation – of ourselves and of the world.  Its primary stories are about liberation from the powers that rule this world, return from exile under those powers, restoration of sight to the blind (including those who have eyes but do not see), life to the dead (including those who are living and yet dead), and a new way of life marked by compassion, justice and peace. It is also about the nightmare of God – the way the world most commonly is.

The Bible’s norm is Jesus.Christians refer to both the Bible and Jesus as “the Word of God.” The Bible is God’s Word in a book – God’s revealing, disclosure, epiphany in the words of our spiritual ancestors, earthen vessels and clay jars. Jesus is God’s Word in a person, the Word become flesh, incarnate, embodied in a human life. When the Word in the book and the Word in Jesus conflict with each other, as they sometimes do, the Word incarnate trumps the Word in words.

That “Jesus trumps the Bible” is not a modern notion. It has been so from the beginning of Christianity. To elevate the Bible as “the Word of God” so that it is equal to and perhaps even superior to “the Word of God” in Jesus is to betray one of the foundations – perhaps the foundation – of Christianity: what we see in Jesus is the decisive (and thus normative) revelation of God.

His passion – and thus for his followers should be ours – was the coming of the kingdom of God on earth. That was the heart of his message, God’s dream. It was embodied, incarnated, in his life, death, and resurrection. What we see in Jesus is God’s passion for the transformation of ourselves and the world

So, does the Bible matter? Absolutely. Without it, the foundation of Christianity crumbles. Do most progressive Christians affirm that? Perhaps not. Many have fled from an understanding of the Bible that was often incredible and sometimes oppressive and hurtful.

But to neglect the Bible because of the negative associations generated by the common Christianity of the recent past and present would be to abandon our heritage and to deprive ourselves of its riches and power as one of the world’s great wisdom traditions.

Properly understood, the Bible is a potent ally in the progressive Christian passion for transformation, of ourselves and the world. It is our great heritage. Along with Jesus, to whom it is subordinate, it is our great treasure. To allow conservative Christians to have a monopoly on the Bible and Jesus is to lose the struggle for the heart and soul of Christianity.  We need to reclaim our tradition.

This post is part of a special summer series at Patheos called Rediscovering Scripture for the 21st Century: Progressive Christians and the Bible.

Progressive Christian
What Would It Have Been Like to Be...
Marcus Borg