Possibly the Greatest Bible Prophecy Is…

Daniel 2:31-35 – “You saw, O king, and behold, a great image. This image, mighty and of exceeding brightness, stood before you, and its appearance was frightening. The head of this image was of fine gold, its chest and arms of silver, its middle and thighs of bronze, its legs of iron, its feet partly of iron and partly of clay. As you looked, a stone was cut out by no human hand, and it struck the image on its feet of iron and clay, and broke them in pieces. Then the iron, the clay, the bronze, the silver, and the gold, all together were broken in pieces, and became like the chaff of the summer threshing floors; and the wind carried them away, so that not a trace of them could be found. But the stone that struck the image became a great mountain and filled the whole earth.

Prophecy is how the God who knows and controls the future reveals it to us so that we can prepare for tomorrow. In Daniel 2 we find one of the most incredible prophecies in all of Scripture.

The God-given imagery is of a warrior king made of differing materials. Each material represents another kingdom that rises up to overtake those that ruled prior.

In amazing detail, the prophecy of Daniel 2 revealed the next six hundred years of human history as everything God promised came to pass. Jesus Christ was born during the rule of the Roman Empire which arrested Him, tried Him, sentenced Him to death, and placed a seal over His tomb. Jesus rose from death, returned to His throne over the Kingdom of heaven where He rules today from the unseen realm, until He returns to establish a Kingdom that never ends, thereby fulfilling the final prophecy of Daniel 2. 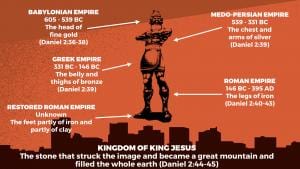 In addition to this introduction to and overview of Daniel, you can find the corresponding sermons, daily devotions, men’s ministry resources, and hundreds of additional sermons and Bible teaching resources for free at markdriscoll.org or on the Mark Driscoll Ministries app.

To visit the Trinity Church in Scottsdale, Arizona, you can plan your visit at thetrinitychurch.com.

February 13, 2020
If You Kneel Before the King, You Can Stand Before kings
Next Post

February 17, 2020 Should a Christian Play Video Games?
Browse Our Archives
get the latest from
Pastor Mark Driscoll
Sign up for our newsletter
POPULAR AT PATHEOS Evangelical
1

Persecution: The New Reality for Biblical...
The Chorus In The Chaos
Related posts from Pastor Mark Driscoll