Several years back Tom Kreitzberg formulated this handy metric for how to pray for culture war friends and foes: 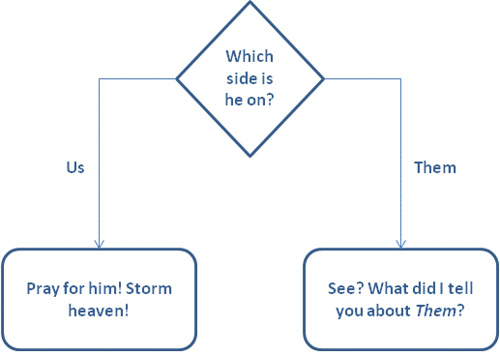 I am now being informed that though Trump is a confessed fornicator who dodged the draft and spent years dodging STDs as his personal Vietnam (but is still qualified to mock POWs and spit on Gold Star families), a man so vengeful he punished an infant nephews with cerebral palsy in a spat over daddy’s money and has never apologized for it, a Christian who has never seen any reason to ask God for forgiveness, and a massively documented liar whose lies dwarf Clinton’s, nonetheless we must pray for his victory since “the heart of the King is in the hands of the Lord” and God can, as with Cyrus (the anointed of God) use him for His own good purposes. Indeed, Michael Voris informs us that Trump is like God’s Chosen Vessel Constantine:

Therefore churlish unforgiving Christians are simply mean-spirited and heartless if they will not cut slack for this admittedly-rough-around-the-edges-but-golden-hearted hero king. We have to be willing to see what God could do with him if he converts, which God is capable of doing, you know!

But, of course, there is zero point in praying for Hillary. She is “pure evil”. Satanic. Irredeemable. Sure, she’s a baptized Christian and practicing Methodist, but there is no hope at all for her. God is powerless to convert her heart. Prayers for her are a waste of time and a vote cast for her in the hope that God might change her or use her in some way is perverse stupidity. God can only change Republican hearts. Nothing she has ever done and said or will ever do and say is good in any way. Praying for her is just wilful self-blindness. It really just reveals how perverse and stubborn the person praying for her is. Probably they should be avoided as apostates too.

September 26, 2016
Turns out Martin Luther King was a whiner
Next Post

September 26, 2016 The Toy Smuggler of Aleppo
Recent Comments
0 | Leave a Comment
Browse Our Archives
Related posts from Catholic and Enjoying It!

Catholic
Why I don't believe the Old Prolife Movement...
Catholic and Enjoying It!