Libertarianism is incompatible with the Faith

“Libertarianism” (we are told) “opposes plunder and violence.”

No. Libertarianism opposes any exercise of state power. That’s what it’s about. It is, like all heretical impulses, the exaltation of a couple of Catholic ideas (the dignity of personal responsibility, the goodness of property, and the hostility to state exercises of lawless tyranny) swollen to madness and used as weapons against the rest of the Church’s teaching on the common good and the responsibility of the state to maintain justice.

Libertarianism is the religious superstition that individualists don’t need the help of society, that the state only does evil, and that your average FOX brainwashing victim on a fixed income will be fine because the 1% totally care about him and certainly will defend him when the Party of Trump robs him of Social Security and Medicaid.

Libertarianism is frequently alloyed with the other vital message of FOX: “Keep your eye on that brown guy, not us, cuz he wants to rape your woman, take your job, and blow you up.”

Above all, Libertarianism is the belief that plucky individuals can destroy Hitler’s Europe, create the internet, build and maintain the interstate, wipe out polio and defeat ebola and that health care can be adequately provided by busking on GoFundMe.

It is the delusion that if you need to defeat Big Tobacco for giving you cancer, why, you and a couple of law books you perused can easily take on 9000 lawyers and win!

The Libertarian answer to a widow Trump wants to toss into the street so he can grab her land and build a casino is, “You’re on your own” and that the true tragedy is when a state superior court judge interferes to inflict “violence” on Trump to prevent him from doing as he pleases.

Libertarianism is Murray Rothbard’s belief that a child is a parasitic invader with no right to life because it cannot pay its parents for the property and labor it demands in order to be carried to term and raised to adulthood. If they choose to do so, they may. But if they decide to abort it or drive the child to a remote location and abandon it they may do that too. They owe it nothing.

Some Libertarians will give you the No True Libertarian song and dance to deny that Rothbard’s insane doctrine speaks for Libertarian doctrine. And yes, it is true that there are Libertarians who cannot face up to the logic of their own doctrine and who, being better human beings that Rothbard, are therefore worse Libertarians than he was. But the reality is that any logically consistent Libertarian must come to the same conclusion he did. The proof of this is that the moment they move away from his monstrous conclusions about refusing children a right to life they immediately take up exactly the same insane arguments to deny the sick a right to health care (which is but the corollary of the right to life). They immediately resume the lie that there can be no right to anything that require the labor or property of another person–which is exactly the basis of Rothbard’s insane doctrine that children have no right to life.

Libertarians make much of the Non-Aggression Principle.
In the final analysis, all it really means is the steadfast belief that the strong may do as they please to the weak and that the state must never interfere to break up the gang rape–because *that* would be violence.

Libertarianism therefore defines taxation as theft, but not price-gouging. It defines labor law as violence, but not strike-breaking. It defends the rich when he sells the righteous for silver and the need for a pair of sandals, since that is just the invisible hand of the market working its wonders to weed out the unfit. It stands firmly on the side of cruelty to the alien, the orphan, and the widow and defies the very possibility, much less the scriptural duty, of the king judging justly or protecting the least of these from the rapine and theft of the wealthy, sleek, fat, and powerful.

More than that, it is a mania that sees in every state action, no matter how obvious, just and sane, the imminent approach of tyranny. All taxation is theft. All claims of the common good are collectivism. All work for the common good is a deprivation of freedom. It is the kind of mania in which a person can, with a straight face, write the words, “It is a liberal fantasy that government provides anything. For something to be given by government, they have to first take it from someone else”–on the state-invented and state-provided internet.

Meanwhile, the common sense teaching of the Church is that there is a common good: that we begin (as Rothbard insanely denies), not as adults freely exchanging goods and labor, but as human beings in radical and incalculable and unpayable debt, not only to God, but to our parents, our culture, our country, our civilization, and ultimately to the whole human race that has provided us, free of charge with life, a language, Shakespeare, the Beatles, the Declaration of Independence, the Bible, lullabies, clothes, electricity, Spiderman, E=MC2, and a billion other things we never would have thought of ourselves.

The central and core lie of Libertarianism is its radical ingratitude and its belief in the grotesque fiction of the Self Made Man. “You are not your own; you were bought with a price.” (1 Co 6:19–20). That is why the central and core truth of the Christian revelation is radical gratitude, also known as the Eucharist.

Libertarianism, I repeat, borrows from the Catholic tradition, as all really powerful heresies do. Indeed, what gives all heresy power is the truth it misappropriates. But Libertarianism adds nothing to the Faith. The truths it asserts are all truths the Faith asserts. But the lies it asserts are its own and only damage our relationship with God, our neighbor and our own souls. Choose the whole Faith over the shreds and patches of Libertarianism.

May 11, 2017 Trump's Chief Achievement for His Christian Base
Recent Comments
0 | Leave a Comment
Browse Our Archives
Related posts from Catholic and Enjoying It! 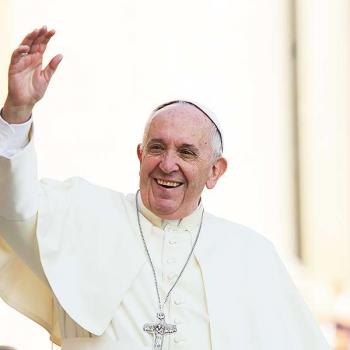 Catholic
The Prophet Chesterton on the Anarchy of the...
Catholic and Enjoying It!
TRENDING AT PATHEOS Catholic