(Washington, D.C., May 15, 2017) — The Pope’s Worldwide Prayer Network (PWPN) has announced that Jesuit Father William Blazek will become its U.S. national director next month, succeeding current director Jesuit Father James Kubicki. Founded as the Apostleship of Prayer and recently renamed by Pope Francis, the network communicates the pope’s monthly intentions to 50 million members in 89 countries, seeking to mobilize people in prayer and action. Its youth branch, the Eucharistic Youth Movement, is present in 56 countries.

PWPN traces its roots to France, where in 1844 a group of Jesuit seminarians, anxious to hurry their studies so they could set out as missionaries, were instructed by their spiritual director to use their time and talents for the salvation of souls as “apostles of prayer.” From the beginning, the Apostleship of Prayer, also devoted to the Sacred Heart of Jesus, has been entrusted by the pope to the Jesuits.

Membership in the PWPN, which is available online, involves “a commitment to offer yourself to God for his purposes each day.” In May, the pope’s prayer intentions are for Christians in Africa and for priestly vocations. Last year, the PWPN launched “Click to Pray,” an app available in English, Spanish, Portuguese, French and German, offering users a digital way to accompany Pope Francis in his prayer intentions.

The appointment of Fr. Blazek was made by Jesuit Father Frédéric Fornos, PWPN’s international director, headquartered in Rome. Fr. Blazek will work from the U.S. headquarters in Milwaukee and will simultaneously serve as the organization’s North American coordinator. Currently an associate director at the Manresa House of Retreats in Convent, Louisiana, Fr. Blazek served as an infantry officer for five years in Iraq before attending medical school and becoming a doctor. After many years of discerning a vocation, he entered the Jesuits in 2001 and was ordained to the priesthood in 2012.

Jesuit Father Timothy Kesicki, president of the Jesuit Conference, the organization that represents the Society of Jesus in Canada and the U.S., said, “I wish to express my deep gratitude to Fr. Kubicki for his 14 years of service. He has worked tirelessly and with great zeal to promote the PWPN throughout the country.”

About the Society of Jesus in Canada and the United States

Founded in 1540 by Saint Ignatius Loyola, the Society of Jesus (Jesuits) is the largest order of priests and brothers in the Roman Catholic Church. Jesuit priests and brothers are involved in educational, pastoral and spiritual ministries around the world, practicing a faith that promotes justice. In Canada and the United States, there are 30 Jesuit colleges and 80 pre-secondary and secondary schools with a shared goal of developing competent, compassionate and committed leaders in the service of the Church and society. Jesuits minister in parishes and at retreat houses and serve as chaplains at prisons, hospitals, nursing homes and in the military. The Jesuit Conference of Canada and the United States, headquartered in Washington, D.C., represents all Jesuits in Canada and the U.S. For more information on the Society of Jesus, visit www.jesuits.org.

May 17, 2017
My friend Pete Beaulieu goes to my parish we occasionally have breakfast together
Next Post 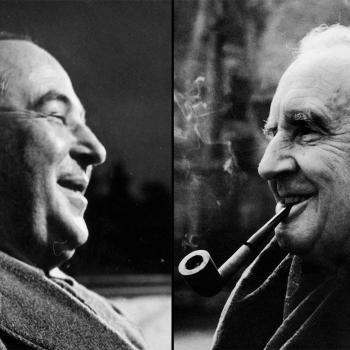 Catholic
Very promising documentary on Lewis and Tolkien in...
Catholic and Enjoying It!

Catholic
Catholic TV Fundraiser coming up this weekend
Catholic and Enjoying It!

Catholic
To My Readers in Florida
Catholic and Enjoying It!

Catholic
This seems like it's worth supporting
Catholic and Enjoying It!
TRENDING AT PATHEOS Catholic