When exorcists need help, they call him

When exorcists need help, they call him August 28, 2017 Mark Shea

Here’s a fascinating story about a psychologist who helps exorcists with the tricky task of discerning the distinction between the demonic and mental illness:

A small group of nuns and priests met the woman in the chapel of a house one June evening. Though it was warm outside, a palpable chill settled over the room.

As the priests began to pray, the woman slipped into a trance — and then snapped to life. She spoke in multiple voices: One was deep, guttural and masculine; another was high-pitched; a third spouted only Latin. When someone secretly sprinkled ordinary water on her, she didn’t react. But when holy water was used, she screamed in pain.
“Leave her alone, you f***ing priests,” the guttural voice shouted. “Stop, you whores. … You’ll be sorry.”
You’ve probably seen this before: a soul corrupted by Satan, a priest waving a crucifix at a snarling woman. Movies and books have mimicked exorcisms so often, they’ve become clichés. 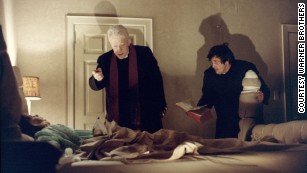 The 1973 film “The Exorcist” shaped how many see demonic possession.
But this was an actual exorcism — and included a character not normally seen in the traditional drive-out-the-devil script.
Dr. Richard Gallagher is an Ivy League-educated, board-certified psychiatrist who teaches at Columbia University and New York Medical College. He was part of the team that tried to help the woman.
Fighting Satan’s minions wasn’t part of Gallagher’s career plan while he was studying medicine at Yale. He knew about biblical accounts of demonic possession but thought they were an ancient culture’s attempt to grapple with mental disorders like epilepsy. He proudly calls himself a “man of science.”
Yet today, Gallagher has become something else: the go-to guy for a sprawling network of exorcists in the United States. He says demonic possession is real. He’s seen the evidence: victims suddenly speaking perfect Latin; sacred objects flying off shelves; people displaying “hidden knowledge” or secrets about people that they could not have possibly have known.
“There was one woman who was like 90 pounds soaking wet. She threw a Lutheran deacon who was about 200 pounds across the room,” he says. “That’s not psychiatry. That’s beyond psychiatry.”
Gallagher calls himself a “consultant” on demonic possessions. For the past 25 years, he has helped clergy distinguish between mental illness and what he calls “the real thing.” He estimates that he’s seen more cases of possession than any other physician in the world.

There was one woman who was like 90 pounds soaking wet. She threw a Lutheran deacon who was about 200 pounds across the room. That’s not psychiatry. That’s beyond psychiatry.

“Whenever I need help, I call on him,” says the Rev. Gary Thomas, one of the most famous exorcists in the United States. The movie “The Rite” was based on Thomas’ work.
“He’s so respected in the field,” Thomas says. “He’s not like most therapists, who are either atheists or agnostics.”
Gallagher is a big man — 6-foot-5 — who once played semipro basketball in Europe. He has a gruff, no-nonsense demeanor. When he talks about possession, it sounds as if he’s describing the growth of algae; his tone is dry, clinical, matter-of-fact.
Possession, he says, is rare — but real.

The general response of the skeptic to all this is, of course, not an argument, but a snort.  Irrational words like “But this is 2017!” (an argument that is as silly as “But this is 12:30 in the afternoon!”)
What is really revealed in such encounters is the falsity of the claim that Christians are obscurantists afraid of rational inquiry while skeptics are simply rationalists pursuing the evidence wherever it leads.  Chesterton has the number of the scoffer here:

Somehow or other an extraordinary idea has arisen that the disbelievers in miracles consider them coldly and fairly, while believers in miracles accept them only in connection with some dogma. The fact is quite the other way. The believers in miracles accept them (rightly or wrongly) because they have evidence for them. The disbelievers in miracles deny them (rightly or wrongly) because they have a doctrine against them. The open, obvious, democratic thing is to believe an old apple-woman when she bears testimony to a miracle, just as you believe an old apple-woman when she bears testimony to a murder. The plain, popular course is to trust the peasant’s word about the ghost exactly as far as you trust the peasant’s word about the landlord. Being a peasant he will probably have a great deal of healthy agnosticism about both. Still you could fill the British Museum with evidence uttered by the peasant, and given in favour of the ghost. If it comes to human testimony there is a choking cataract of human testimony in favour of the supernatural. If you reject it, you can only mean one of two things. You reject the peasant’s story about the ghost either because the man is a peasant or because the story is a ghost story. That is, you either deny the main principle of democracy, or you affirm the main principle of materialism– the abstract impossibility of miracle. You have a perfect right to do so; but in that case you are the dogmatist. It is we Christians who accept all actual evidence–it is you rationalists who refuse actual evidence being constrained to do so by your creed.

I am under no dogmatic demand to buy every claim of demonic possession.  But the materialist is under an absolute dogmatic demand to deny them all, no matter how much truly bizarre evidence piles up to say, “This sure as hell looks like demonic possession.”  You *have* to say it, no matter what.  The Catholic is free to say, “Maybe.  Maybe not.  Let look at the evidence.”

That it *may* occur is the clear testimony of the gospels.  All it requires is acceptance of the proposition that Jesus knew what he was talking about when he cast out demons, as well as acceptance of the proposition that there is nothing to forbid the possibility that non-corporeal intelligences known as “angels” can exist, can misuse their free will to rebel against God and become his enemies and ours, and that they can sometimes invade the  human person (weakened by sin or other trauma) and dominate his personality to such a degree that the person is no longer able to control his own actions.  I see no reason in the world to say any of that is impossible and I see plenty of reason to believe the thing happens sometimes, beginning wit the testimony of the Incarnate of God and the whole Church who follows him.

August 28, 2017 The Hell You Say!
Recent Comments
0 | Leave a Comment
Browse Our Archives
get the latest from
Catholic
Sign up for our newsletter
POPULAR AT PATHEOS Catholic
1

Catholic
The Strange Story of Brooke Greenberg
Catholic and Enjoying It!

Catholic
Tales of the Unexplained!!!!
Catholic and Enjoying It!

Catholic
A psychiatrist who works with exorcists
Catholic and Enjoying It!

Catholic
Ross Douthat on Ghosts and Other Tales of...
Catholic and Enjoying It!
TRENDING AT PATHEOS Catholic