Lady Gaga posts a pic of herself sincerely praying the Rosary in her illness.  The Righteous assemble to denounce her and drive her away as a vile seductress.

Donald Trump, having already to confessed to sexual assault and never apologizing for that (he demurred that his confession was not a confession but “locker room talk”), now talks about groping his wife in public.  The Righteous assemble to explain that he is a Baby Christian and to press on with the project of seducing themselves to support everything he does, including letting Puerto Rico die of thirst while he sits on the toilet tweeting resentment about jocks who threaten his fragile manhood. 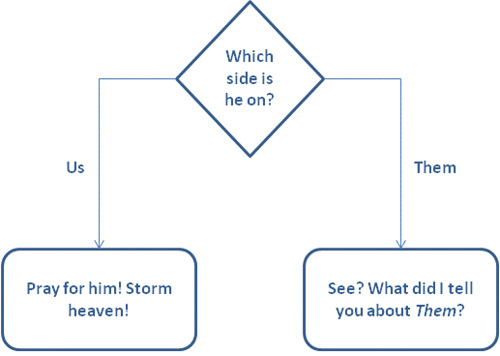 September 26, 2017
Michael Liccione writes about the "filial correction"
Next Post

September 26, 2017 Had Andrew March on Connecting the Dots
Recent Comments
0 | Leave a Comment
Browse Our Archives
get the latest from
Catholic
Sign up for our newsletter
Related posts from Catholic and Enjoying It!

Catholic
A reader writes to accuse me
Catholic and Enjoying It!