My religion is cooler than yours

My pal Tom McDonald, finder of astonishing Catholic arcana, will periodically make that remark when he posts some amazing oddity out of Catholic history and culture.  I thought of that the other day when we were having one of those discussions about the Catholic Puritan strategy for shutting down whatever it is the Catholic Puritan hates with the tried and true, “Would the Immaculate Conception do or say X?”

The backdrop of the conversation was the firing of Rebecca Bratten Weiss at Franciscan University and the sudden vapor the Super Duper Best Catholics of All Time were having over teaching books besides the Chronicles of Narnia and Little House on the Prairie.  You know, icky books for grownups like Lolita.  And she even enjoys Game of Thrones.  So the standard cry went up:  “Would the Immaculate Conception read such books? Would the Immaculate Conception be able to sit in on one of your classes?”

Rebecca tartly replied: “A middle aged Jewish woman surviving in occupied territory who saw her Son executed by the conservative religious leaders in collusion with the Imperial forces could sit through more than l ever have.”

Again, when it comes to Catholicism, traditionalism ought never be confused with fundamentalism.

Thus as a Byzantine Catholic, I will venture a traditional response written (painted) in rebuttal to those during past Christological controversy who asserted Christ’s Divine nature at the expense of His human nature. This venerable icon is known in the East as Galaktotrophousa (Milk nourishing):

Here is a Western version, dated 1146, from Speyer Cathedral, of Mary nourishing St Bernard de Clairveaux by spraying him in the mouth with her breast milk as baby Jesus laughs: 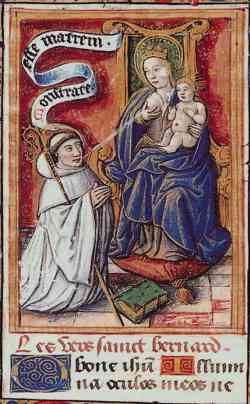 And yes, this is a Real Thing:

The Immaculate Conception is a lot tougher, more peculiar, and funnier than you think.  So remember: The next time people wield the Blessed Mother as a sort of Puritan cudgel (“Would the Immaculate Conception wear pants/put on perfume/read Harry Potter/listen to that song/watch that movie/etc”) remind yourself that one of the few things we actually know about our Lady from Scripture is that, when the party stalled, she was the one telling Jesus to get going with making sure the wine was flowing by the gallon.

October 13, 2017
The Church is not Going to Reverse its Development of Doctrine on the Death Penalty
Next Post 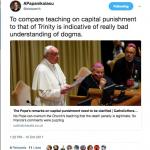 Catholic
Since today is the Feast of the Assumption...
Catholic and Enjoying It!

Catholic
Since It's Mary's Day...
Catholic and Enjoying It!

Catholic
The Virgin by William Wordworth
Catholic and Enjoying It!

Catholic
I think this is perfectly good Catholic piety
Catholic and Enjoying It!
TRENDING AT PATHEOS Catholic