Washington state is the place for all your bead needs

We’ve got your sacred beads (click the link for the whole story):

Travelers who happen upon a regional museum in Washington state are frequently surprised to find there the largest collection of rosaries in the world – according to no less an authority than “Ripley’s Believe It or Not.”

Located in southeastern Washington, on the north side of the Columbia River Gorge, near the picturesque town of Stevenson, the Columbia Gorge Interpretive Center houses a collection of some 4,000 rosaries that can easily take hours to examine closely.

The display of rosaries was the life’s work of the late Donald A. Brown of North Bonneville, who was a founder of the Skamania County Historical Society. Born April 27, 1895, in Tualatin, Oregon, he died in a traffic accident Dec. 14, 1975, at age 80.

In an article he wrote for a regional newspaper, Brown remarked: “Perhaps the most common question asked by visitors to my rosary chapel in North Bonneville (the site of the rosary collection during Brown’s lifetime) is how did I ever happen to originate such an unusual collection?”

Brown explained that his collection began in 1917 when he was living in The Dalles, Oregon, but his interest in the rosary as a devotional prayer began years earlier, before he became a Catholic, while he was confined to the Mercy Hospital in North Bend, Oregon, recovering from pneumonia.

And your secular beads at Shipwreck Beads, the largest bead store on planet Earth. 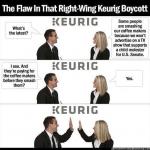 November 13, 2017 The Hannitized "Mind"
Recent Comments
0 | Leave a Comment
Browse Our Archives
Related posts from Catholic and Enjoying It!

Catholic
Something to Astound You for a Saturday
Catholic and Enjoying It!

Catholic
More information on Ish Kabibble and his odd...
Catholic and Enjoying It!

Catholic
Brushes with Fame
Catholic and Enjoying It!

Catholic
You know, I could have Rick-Rolled You
Catholic and Enjoying It!
TRENDING AT PATHEOS Catholic