Over at the Catholic Weekly, we are discussing Matthew and Isaiah and the Virgin Birth

Over at the Catholic Weekly, we are discussing Matthew and Isaiah and the Virgin Birth December 18, 2017 Mark Shea

It started this way:

“Yikes! Is this true?” The email landed in my mailbox with resounding virtual thud, asking for help for a confused Catholic baffled by one of those Mysteries of the Bible shows on cable TV.

I have a private theory that the people who write the Mysteries of the Bible programs used to write for Scooby Doo, Where are You! and just brought a winning formula to their new gig (“Why that was no supernatural occurrence! It was just old Mr Higgins in a bedsheet!

It was heading on toward Christmas and the show my friend saw had turned from the “explanations” listed above to explaining away the Virgin Birth. (Every Christmas and Easter, like clockwork, the media goes in search of “the real Jesus” or the “real Mary” and “the real story” about the birth and/or death and resurrection of Jesus.)

The scholars on the show my friend watched, eager for their fifteen minutes of fame, explained that the prophet Isaiah had not actually said, “Behold, a virgin shall conceive and bear a son, and shall call his name Immanu-el.” (Isaiah 7:14). Actually, the Hebrew says an almah or young woman shall conceive.

But centuries after the time of 8th century BC Isaiah (and roughly two centuries before Jesus) the Jews, now scattered through a Greek-speaking world, needed a translation of their own Bible since many Jews were losing their Hebrew and could not read their own sacred texts. So they made a translation call the Septuagint and translated Isaiah’s almah into the Greek word parthenos or virgin.

My friend was understandably confused and worried. Was this all true? 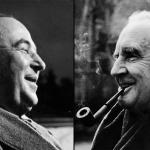 December 15, 2017
Very promising documentary on Lewis and Tolkien in the works!
Next Post

December 19, 2017 Deacon Steve Greydanus on Lifting Up the Lowly
Recent Comments
0 | Leave a Comment
"Late to the game, but while I agree with him that the end doesn’t justify ..."
Catherine Hobbs Building Bridges of Trust vs. Winning
"I also think netflix is more evil than good, the things they have and support ..."
Jackson A reader struggles with scruples about ..."
"I am pretty sure remote cooperation is evil unless with proportionate reasons..."
Jackson A reader struggles with scruples about ..."
"Just one nit - the Dickey Amendment (the bit of law that supposedly "forbids" the ..."
Jon Heresy of the Day: Antinomianism
Browse Our Archives
get the latest from
Catholic
Sign up for our newsletter
POPULAR AT PATHEOS Catholic
1

Catholic
A Sonnet for Christmas
Catholic and Enjoying It!

Catholic
The Best Man and the Least
Catholic and Enjoying It!

Catholic
The Doubts of John the Baptist
Catholic and Enjoying It!
TRENDING AT PATHEOS Catholic