Now that the Cult is in charge we see that they are, in fact, the homicidal purgers of the weak and poor.

Megan Willis lives with cystic fibrosis, a deadly disease that causes extensive lung damage. The 22-year-old said she spends around six hours a day administering medications and therapy, and that the disease frequently causes infections and other complications.

With the condition, Willis qualified as a disabled adult for Social Security benefits on living expenses. About 10 million other Americans too disabled for work also get the stipend, called Disability Insurance. More importantly, having Social Security gave Willis access to Medicaid, which paid her annual health care costs of over $100,000.

But in March, Social Security sent her a letter saying her health had improved since the last review of her case and that she was able to work. This was news to Willis.

“My health has only gotten worse in the past year,” Willis told CBS News chief medical correspondent Dr. Jon LaPook.

Despite that, her Social Security benefits were terminated and she lost Medicaid. Since she lives in Florida, one of 14 states without expanded Medicaid, she had no other way to get it. Her family can’t afford private insurance.

While the medical bills mounted, she began law school.

“I don’t want to just stay stagnant and you know, depressed, looking at the four walls of my room,” Willis said. “I want to move up in the world even if you know it’s going to be hard.”

Brian Harvey’s employer took away his health insurance just in time for his son’s cancer diagnosis.

“Beginning of June my wife found a lump in my son’s stomach when she was just playing with him,” he explained. “We went in to see his pediatrician and next thing you know they just told us to go to the emergency room.”

Harvey’s son had his kidney removed shortly after, but he got a phone call after the surgery saying the child had stage three cancer that had traveled to his lymph nodes. A week later, he got a letter in the mail saying that his insurance was being terminated.

Energy giant National Grid, where Harvey works, recently locked out 1,250 gas line workers in Massachusetts, and ended their health care on the same day, to put pressure on workers during union contract negotiations. They also reported $3.66 billion in profits in May — a 24% jump. The company is hoping to cut wages and health benefits in the new contract.

“At the times like, this, you think, you know, you’re basically just a number to them,” said Harvey. “What I’d say to National Grid is how greedy can you be? And is it worth it to you like, the more money you put in your pocket, is it really worth it to hurt all these people?”

I know. I know. This is a private company, not the state denying him insurance. But that, of course, is because the state protects private companies that do this to their workers and the GOP has labored to punish people who children are rude enough to have pre-existing conditions when their job cuts off their insurance. Because the bottom line for the Cult of Trump is the bottom line, not human beings. If the poor be like to die, they had better do it and help decrease the surplus population. Or as the GOP cheered: “Let him die!”

Finally, there is Exhibit C, which has a certain personal ring for me as a diabetic. That is, the growing number of stories of people dying because they cannot pay for the insulin they need in order to stay alive. Why? Because the cheering Christianist sadists in the video are delighted at the thought that people who cannot afford insulin should be ruled lebenunwertes leben by the state and put to death to save money, just as they accused advocates of the Church’s call for universal health care of desiring.

The real Death Panelists are the Christianist devotees of the antichrist GOP Cult of Trump. 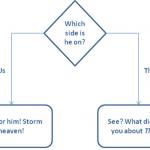 January 8, 2019
The response to Fr. McCloskey illustrates the failure of the conservative Catholic approach...
Next Post

Catholic
John Oliver on Medicare for All
Catholic and Enjoying It!

Catholic
The Problem with the Libertarian View of Universal...
Catholic and Enjoying It!

Catholic
The GOP gets back to the business of...
Catholic and Enjoying It!
TRENDING AT PATHEOS Catholic