I’m thinking of actually converting to orthodox. My dad was. I’ve been reading the orthodox way and Frederica Matthews-Green, and feel called, like a vocation.

It came down to me walking with two friends, one catholic and one orthodox. We saw a prostitute (not unusual for 14th Street at night). My catholic buddy wanted to cross the street. My ortho pal said we should pray for her.

I told another ortho friend I’ve been going to Byz DL. He asked, “Why not come all the way home?” that’s bothered me a lot over the years. Nagging thought, you might say.

Do you think I’m betraying my faith? Would I have to give up my catholic friends and events?

I had to ask some Bosnian Muslim friends of mine for input, too. I felt like I was betraying them because Serbian Orthodoxy is very entwined with nationalistic fervor. But we don’t seem to have that problem here, unless you count fundamental evangelists.

I’m not going to sit in judgment of you in terms of ‘betraying your faith’. That’s above my pay grade. I can only say how I would approach the issue.

The first thing I would note is that the issue is discipleship to Jesus Christ that has to be be at the center or there’s no point. I mean yours, not somebody else’s. What is Jesus calling you to do and be in your service to him? That is a positive, not a negative, call. So as the Holy Spirit put it to me when I was looking at becoming Catholic, the truth is you can’t build a life on protest.

What I mean is this: I was really pissed at my former Protestant church and was tempted to become Catholic, not to say, ‘Yes, Lord. Lead me’ but to say, ‘Screw you’ to my old church. We can, if you will, walk into the Church backward, not facing the altar, but facing all the people we are leaving behind and, ironically, remaining locked in a dysfunctional relationship with them, not in a living, growing relationship with the Lord. So that might be something to think about.

Second, there is the reality that ‘the grass is always greener on the other side of the fence’ syndrome can make the east look attractive in ways that are often illusory. Every single pathology we face in the west is there in the east too and any honest Orthodox will tell you that. There is a lot to love about the east and they have their share of saints and holy people, but there are also any number of Orthodicks–I learned the term from an easterner–there too. You won’t escape any of that in the east. Indeed, one of the most obnoxious phenomena–fortunately fairly uncommon–is the ex-Catholic Orthodox who spends all his time bashing Catholics instead of being Orthodox. That is typically an expression of pain and disappointment, of course, and understandable. But it’s still unhealthy.

Finally, there is the issue–for me, intractable–of the reality of Petrine primacy and of the unity of the Church. As much as Catholics bug the hell out of me and as badly as I have been hurt by the freak show of American Conservative Catholicism, I cannot get past the fact that Jesus prayed that we may be one and that the Holy Spirit and no human being is the soul of the Church. So I cannot part from her. Again, this is all about how I would navigate this and is in no way intended to lay any judgments on you. For my part, I pray you will stay and will work for the reform of our badly wounded and gravely ill body of Christ. But you must, of course, obey your conscience, wherever it leads you in the light of the Holy Spirit. May he guide you through Christ our Lord and, above all, may we all–east and west–meet merrily in heaven on That Day. 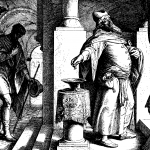 April 29, 2019
Another typically brilliant piece from Where Peter Is
Next Post

Catholic
Talking with an atheist friend about justice
Catholic and Enjoying It!
TRENDING AT PATHEOS Catholic