Talking with a Friend Who Fears Francis

Talking with a Friend Who Fears Francis April 16, 2019 Mark Shea

Please forgive me if the capitalization in this post is hinky. My keyboard is on the fritz and awaiting repair.

Regarding the CRISIS piece on Francis’ alleged socialist agenda, I find it hard to buy for a couple of reasons.

First of all, it assumes as a matter of course that anything socialist is, ipso facto, absolutely incompatible with the faith. This, according to no less an authority than Benedict XVI, is not true. Here is his discussion of socialism in First Things

But in Europe, in the nineteenth century, the two models were joined by a third, socialism, which quickly split into two different branches, one totalitarian and the other democratic. Democratic socialism managed to fit within the two existing models as a welcome counterweight to the radical liberal positions, which it developed and corrected. It also managed to appeal to various denominations. In England it became the political party of the Catholics, who had never felt at home among either the Protestant conservatives or the liberals. In Wilhelmine Germany, too, Catholic groups felt closer to democratic socialism than to the rigidly Prussian and Protestant conservative forces. In many respects, democratic socialism was and is close to Catholic social doctrine and has in any case made a remarkable contribution to the formation of a social consciousness.

Benedict, in fact, hails from a country which, pretty much like the rest of Europe, has adopted quite a number of social support networks that function just fine and that are, as he notes, quite compatible with Catholic teaching. Every one of these systems would be categorically condemned as ‘socialist’ by the American right and by the writers and readers of CRISIS. Indeed, the entire English-speaking world as well has adopted what American bishops have literally been demanding for a century; universal health care, which the Church teaches is a human right and we alone still treat as a privilege and condemn as ‘socialist’. It has resulted in, among other things, a health care system where diabetics like me are literally being murdered by insulin costs that force the poor to ration—and die as a result. And that is just the tip of the iceberg when it comes to the madness of our medical system. Meanwhile, the Trump Administration wants to completely destroy Obamacare and has no plans to replace it while also stealing billions from Social Security, Medicare and Medicaid in order to pay for the trillion and half in money he and his party just gave to the 1 percent.

If we are going to worry about socialism, I say we should attack the socialism of the rich that is the hallmark of the party of Trump, not the ‘socialism’ of the poor that is simply the Church’s teaching on the common good.

So since there is nothing necessarily incompatible about Catholic teaching about certain aspects of socialism, the question has to be asked, what exactly is Francis saying or doing that is contrary to the faith? I don’t see anything. What I see is offended American conservatives at CRISIS defending the perks of the super-wealthy.

I think one very good idea is to take a good look at Francis’ formative influences. There is a fine website of theologically serious and thoroughly orthodox writers called Where Peter Is. A few weeks back, they did a really nice series on precisely this and I would strong urge you to take a look at it here, here, here, and here.

Take a look at the rest of the site too.

I don’t think Francis is a perfect Pope. Even Peter was not that. But I think the conservative Catholic media hysteria against him is profoundly false. He is, I am convinced, a pope whose whole pontificate can be summarized in the words “he has preached good news to the poor’. He has a charism of making himself unavoidable to very powerful and wealthy people who hate his living guts and who have sought his destruction almost from the second he was elected. He has made some blunders, like they all have, but I believe with all my heart that he seeks to serve Jesus Christ. I pray that series will help make his thinking and motivation less mysterious and frightening to you.

God bless you, dear, as you continue to seek Jesus on your own journey. I know you have a heart for God and I don’t mean anything I have written above to be taken as a rebuke or as hurtful. My prayer is that you will come to see the Holy Father as a father and a friend and not as somebody to fear.

I hope your Lent is going well. Love from Jan.

April 15, 2019
Palm Sunday and Jesus' Claim to be the Christ
Next Post 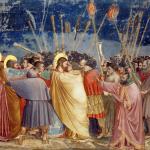 April 17, 2019 A Medieval English Poem Translated for Spy Wednesday...
Recent Comments
0 | Leave a Comment
"Modern literature = pornography"
aeolian soundings Franciscan University Hands Over Control to ..."
"The author of an extremely wordy article has been raging on and on and on. ..."
aeolian soundings Franciscan University Hands Over Control to ..."
"What a wonderful response !!! I even signed in, --- to tell you this. I ..."
thomasina Catholic Reactionaries and Jew Hatred are ..."
"Swings and misses across the board, Linda."Pure evil"? Well, I hope you can avoid throwing ..."
Tim Lambert What has the “Prolife” MAGA Cult ..."
Browse Our Archives
get the latest from
Catholic
Sign up for our newsletter
POPULAR AT PATHEOS Catholic
1