…in the pages of the New York Times, so they have officially hit the Big Time. Douthat, whose super-judicious and perceptive prudence about all things Catholic once moved him to write this encomium to documented white supremacist and aspiring ethnic cleanser Stephen Miller, is quoted and answered here:

He mentions WPI while describing the second path forward:

“Another alternative is a conservatism that simply resolves the apparent conflict between tradition and papal power in favor of the latter, submitting its private judgment to papal authority in 19th-century style — even if that submission requires accepting shifts on sex, marriage, celibacy and other issues that look awfully like the sort of liberal Protestantism that the 19th-century popes opposed. This would be a conservatism of structure more than doctrine, as suggested by the title of a website that champions its approach: ‘Where Peter Is.’ But it would still need, for its long-term coherence, an account of how doctrine can and cannot change beyond just papal fiat. So it, too, awaits clarifications that this papacy has conspicuously not supplied.”

His description of our position is sadly inaccurate, but it is reassuring that he describes our approach as “conservative,” rather than liberal, progressive, or modernist. Too often in recent years fidelity to the pope has been associated with a liberal agenda.

Our position is simply that Catholics are called to respond with docility and obedience to the ordinary Magisterium of the pope, regardless of who the pope is. Our position is that the Living Magisterium is the authentic interpreter of Scripture and Tradition in the Church. As the Catechism says:

‘The task of giving an authentic interpretation of the Word of God, whether in its written form or in the form of Tradition, has been entrusted to the living teaching office of the Church alone. Its authority in this matter is exercised in the name of Jesus Christ.’ This means that the task of interpretation has been entrusted to the bishops in communion with the successor of Peter, the Bishop of Rome (CCC #85).

Douthat suggest that in order for the Where Peter Is approach to be coherent, there needs to be “an account of how doctrine can and cannot change beyond just papal fiat.” Such an account already exists, and it is called the development of doctrine. This is what we’ve been asserting since the beginning: that the development of doctrine is sometimes more mysterious and often less predictable than the critics of Pope Francis would have you believe. Yes, there is continuity, and there are unchangeable truths, but the movement of the Holy Spirit in the Church isn’t something that we can predict or immediately comprehend.

If the Magisterium is the only authoritative interpreter of the Tradition, then it follows that the Magisterium that informs the faithful’s understanding of Traditions. We should be learning from Laudato Si’ and Amoris Laetitia, not picking them apart and judging them against our ossified understanding of the Faith. Pope Saint Paul VI spoke of this in a 1976 letter to SSPX founder Archbishop Marcel Lefebvre:

“Tradition is not a rigid and dead notion, a fact of a certain static sort which at a given moment of history blocks the life of this active organism which is the Church, that is, the mystical body of Christ. It is up to the pope and to councils to exercise judgment in order to discern in the traditions of the Church that which cannot be renounced without infidelity to the Lord and to the Holy Spirit—the deposit of faith—and that which, on the contrary, can and must be adapted to facilitate the prayer and the mission of the Church throughout a variety of times and places, in order better to translate the divine message into the language of today and better to communicate it, without an unwarranted surrender of principles.”

Thus a development in doctrine is legitimate precisely because it is the Holy Spirit, through the Magisterium, that guides the Church in the development of doctrine. Popes do not rule by “fiat.” Rather, we as Catholics can trust that all magisterial teachings, are in continuity with Tradition.

We believe that Christ leads us to an always greater understanding of Himself by giving us the Holy Spirit who speaks through the living Magisterium. Stay close to the Pope and through him you will be led by the Spirit to the inexhaustible depths of Truth Himself. Vatican News recently published an explanation of the development of doctrine that said:

“Catholics should not only never be lacking in respect toward the Pope, but should love him as the Vicar of Christ. Fidelity to Jesus does not, therefore, mean being fixated on some text written at a given time in these two thousand years of history; rather, it is fidelity to His people, the people of God walking together toward Christ, united with His Vicar and with the Successors of the Apostles.”

Chesterton remarked that one of the things that struck him about the enemies of the Church was their odd habit of being so eager to contradict the Church that they did not mind contradicting themselves.  I am reminded of it as the ongoing struggle of Reactionaries against the Holy Father stumbles on, saying anything that comes to hand just to complain and hoping any stigma will do to beat a dogma.

One complaint that gets bruited whenever there is a synod is the Reactionary gripe that “synodality” is “liberal” because God help us if those pagan Amazonians desperate for pastoral care and sacraments where currently virtually none are available should hit on the absolute novelty of ordaining married men (as the Church has literally done here and there since Simon Peter had a mother-in-law).  “The Church is not a democracy!” goes the shriek against a synod that at no point suggested the Church is a democracy.  So the Reactionaries gripe that “synodality” is weak tea and we need a strong authoritarian Pope to set things to rights not knuckle under to the cries of brown Catholics in need.

But then they also claim that he is a “dictator pope” who rules by “papal fiat”.  It reminds me weirdly of this–because Catholic Right Wing Media has, in fact, copied the same ceaseless, unflagging, relentlessly accusing, Panic du Jour technique that FOX and secular Right Wing Lie Machine talk radio have perfected to keep their low information audience angry, frightened, and ignorant:

So the pope is a weak, liberal, synodal, mom-pants-wearing DICTATOR POPE! What we need is to get rid of him, either by declaring him a fake pope, or a heretic, or by praying for his death (like good “prolife” pious Catholics do, doncha know). Then we need to listen to the warring paranoid conspiracy theories and quack panacaeas of a gaggle of internet mini-popes who tell us to ignore the Magisterium altogether”: 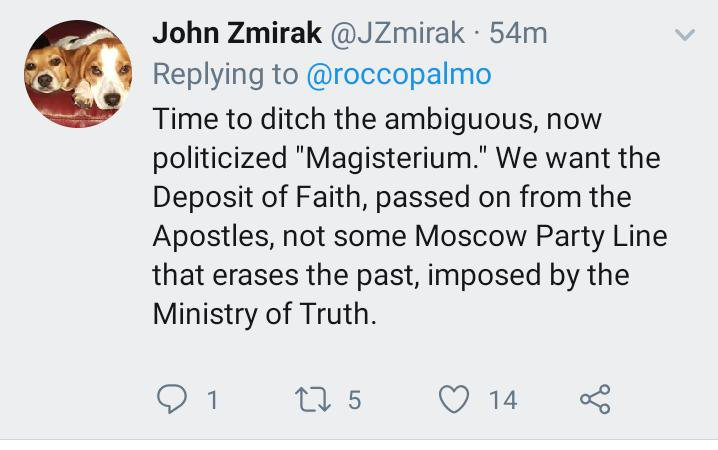 If that sounds like dimestore FOX Newsified Protestantism, but without even the intellectual firepower of a Luther or Calvin or the Book of Common Prayer to keep it going, you are right.  What guys like Zmirak mean is that the buzzing swarm of fissiparous cranks supping at the thin gruel of Burke, Arroyo, Ingraham, 1 Peter 5, Liesite “News”, Vigano, Church Militant, Taylor Marshall, and a few other kooks should make them our synod of internet mini-popes until they quarrel and excommunicate each other.

Meanwhile, back in reality, all those of us who still think the pope is the pope and not “Franky Bergoglio” or the “vicar of Satan” or a heretic, apostate, pagan idolator ask is that people who used to claim to respect the Magisterium back when they thought it would accessorize their culture war politics consider the possibility that they could actually learn something from the Magisterium if they could just get past their towering pride.

November 18, 2019
Where Peter Is has been doing great work
Next Post

November 20, 2019 Where Peter Is takes up the Douthat interview w/ Cardinal Burke
Recent Comments
0 | Leave a Comment
Browse Our Archives
Related posts from Catholic and Enjoying It!

Catholic
The Weird Fundamentalist Catholic/Evangelical Alliance
Catholic and Enjoying It!

Catholic
And here is some of the last part...
Catholic and Enjoying It!
TRENDING AT PATHEOS Catholic