Talking with an atheist friend about justice

Talking with an atheist friend about justice December 17, 2019 Mark Shea

So a while back, I read yet another horrifying article about the monstrous–and intensely beloved by MAGA “prolife” Christianists–Trump policies of cruelty to children and I tweeted:

“They should obey the law!” say these godless hypocrites about their victims as they cheer for Trump spitting on the Constitution.

When I use a term like “godless” I don’t usually mean so much “having an intellectual belief in the non-existence of God” but (which is typically biblical usage) “acting as though God does not exist, whatever pious blather one may spout” (recall that there were no atheists in the biblical world). Of course, I seldom spell that out because I assume my readers have brains. And I was happily rewarded to discover I was not wrong. I have atheist readers and one of them (a real sweetheart whose moral instincts are deeply Catholic) wrote me about my use of the word “godless”. It was a lovely conversation:

i agree that those people are also “godless”. when i see people hiding behind religions to support evil acts, i think “wow. these people are actually on my side of the god debate. they don’t believe otherwise they’d fear divine justice.”

i mean, i dont think there will be divine justice, but thats why i’m trying to make it a reality in this life, here and now.

hope all is well with you!

Saw your FB message and appreciated it. I’m one of those “Godless is as godless does” sort of people. So though you think of yourself as an atheist, I think of you as somebody who, in the very best sense of the word, fears God. Such fear is not craven servility but the power to see that other people have dignity and to feel horror, not only for assaults on them, but for the even worse horror of people like Trump or Miller, who spit in their faces.

I was at Mass on All Saints and the reading was the Beatitudes. One Beatitude really stuck out for me and it seemed to me that the Spirit wanted me to tell it to you: “Blessed are those who hunger and thirst for righteousness, for they shall be satisfied.” (Mt 5:6).

You wrote me that you care about justice because you think we are on our own and this is our only shot. It’s a noble and good thing to try to do what is right, just because it is right and with no expectation of reward. Jesus, curiously, urges the same approach:

“You have heard that it was said, ‘You shall love your neighbor and hate your enemy.’ But I say to you, Love your enemies and pray for those who persecute you, so that you may be sons of your Father who is in heaven; for he makes his sun rise on the evil and on the good, and sends rain on the just and on the unjust. For if you love those who love you, what reward have you? Do not even the tax collectors do the same? And if you salute only your brethren, what more are you doing than others? Do not even the Gentiles do the same? You, therefore, must be perfect, as your heavenly Father is perfect. ” (Mt 5:43–48).

But there is reward and reward. External rewards–brownie points, money, acclaim–are not what the heart wants and you do well to reject such phoniness. But intrinsic rewards are fitting and good and not bribes for virtue. So a person who marries for money does evil. But a person who marries for love receives the proper reward for a good heart: the beloved.

You want the proper reward for hungering and thirsting after righteousness: righteousness. You want justice and decency and the exaltation of the weak and the proper use of power by the strong. You hunger for love and justice to be done “on earth as it is in heaven” even though you don’t think heaven is real. It matters far more to Jesus that you want that than that you think heaven real.

But the good news is that Jesus says heaven is real anyway and is on your side and that you are not on your own. We won’t ever see the hunger and thirst fully filled in this life, of course. But we are not on our own. Grace is real and breaks into our lives. You are, strange to say, one of the graces of God that has broken into my life and the lives of many others.

I guess I’m writing to say that I hope you open yourself to the hope that you are not, as you thought, on your own. God loves you and he wants you to know it. You’re a menschette and I hope you come to know it soon.

i used to think that “serving god” was some kind of slave like thing. that was just an uncharitable misinterpretation on my end. i think i get it now in the sense that what i think is “aligned with nature” is probably very close to what people meant with serving/submitting to God.

all the things i like about the different religions and philosophies are pretty much the same virtues.

anyhow, thanks for thinking of me. lol funny, another friend messaged me over pretty much the same sermon. i do love that Sermon on the Mount.

i may be at odds with yous on what’s real and isn’t, but the beauty? that’s definitely real. and probably what matters the most

She is not far from the Kingdom of Heaven. It’s an honor to know her. 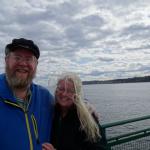 December 18, 2019 Magical thinking
Recent Comments
0 | Leave a Comment
Browse Our Archives
get the latest from
Catholic
Sign up for our newsletter
POPULAR AT PATHEOS Catholic
1

The Grace of God in Scrambled...
Steel Magnificat
Related posts from Catholic and Enjoying It!