The savior who made us relevant to His mission (Acts 1:6-11) 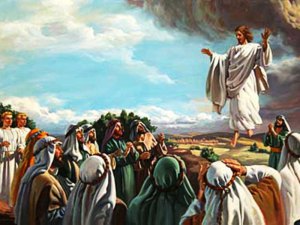 I preached this weekend about the ascension of Christ. As I shared in a blog post earlier in the week, I think it’s important to consider why Jesus ascended to heaven instead of sticking around in visible fleshly form in His immortal body. The dialogue between Jesus and His disciples in Acts 1:6-11 helps to shed light on why His ascension was part of God’s plan. Below I’m sharing the sermon audio along with a written summary:

I divided my sermon between four sentences in Jesus’ dialogue with His disciples. It starts when Jesus’ disciples ask Him a question.

Israel had been under occupation by foreign powers for about 580 years when the disciples asked this question. First the Babylonians, then the Persians, then Alexander the Great, then his generals, and last Rome. If you think about it, it’s not an unreasonable thing to ask a messiah who has just proven He can’t be killed. Jesus could have marched on Rome and used His miraculous powers to achieve a battlefield victory.

In a much more abstract sense, there’s a way in which this is the question that our world is constantly asking. When will the kingdom be restored? When will we get back to the golden age? When will the world be what it was when we were innocent? As Paul puts it in Romans 8:19, “The creation waits with eager longing for the revealing of the children of God.”

I remember when I was a senior in college and the Y2K scare came up. Several fundamentalist Christians I knew were really hoping that was going to be the rapture moment. They stocked up on supplies and built wells in their backyard. And then… nothing. I don’t think they wanted the world to crash for malicious reasons. I see their yearning as a product of living under a suffocating technocracy that has smothered the possibility of doing anything heroic in the lives of most people at least in our country.

We have not experienced any decisive social upheaval for at least the past forty years. I think this makes a lot of Americans restless in their doldrum cubicle worlds, and that’s why they need to fantasize about secret plots by the Muslim Brotherhood to take over our government and so forth. So we ask like the disciples, “God, when will you flush all the corruption and inertia and hopelessness of our world down the toilet and replace it with your new Jerusalem?”

Jesus’ response to the disciples is one of the most obnoxious things to hear from God when you’re praying: “It’s not for you to know.” Ooh… I get so mad when He says that to me. I want to know why. I want to know when. I want to know how. But it doesn’t work that way. An important part of God’s sovereignty over us is His mystery. When we hate mystery in God’s word, what we’re hating is our lack of sovereignty over God. We want to be in the position of owning the truth so we can use it to our advantage.

One thing that Jesus’ ascension reveals about God is that He’s deliberately choosing to hide some things out of our reach. If Jesus were still walking around in Galilee, there would be no theological debate whatsoever because we would simply phone it in to Jesus and ask Him to give us the answer. Of course, this wouldn’t necessarily be true if we consider how Jesus responded whenever anyone approached Him with a question that was part of trying to win an argument. Jesus answered those kinds of questions with questions of His own. He refused to be pinned down. So His ascension is basically a radicalization of His coyness in responding to people who demanded answers from Him.

This is the heart of the answer to why Jesus ascended to heaven: so that we could be empowered. If Jesus had stuck around, there would be no opportunity for His disciples to grow as leaders. He wouldn’t need a rock like Simon Peter on which to build His church because He would remain the fully-fleshed head of the church instead of being a mystical body into which we can all be absorbed like branches miraculously grafted onto a tree.

Of course, the other thing we should say about heaven is that it’s not somewhere far away where Jesus flew on the back of a comet. Heaven is the eternal core of our reality. It is closer to us than we are to ourselves, because heaven is the reality being described when Paul writes about Jesus that “in him all things were created… and in him all things hold together” (Colossians 1:16-17). Jesus’ heavenly presence floods every corner of God’s creation. As the Word of God, He is the one who speaks every sunrise into existence and every piece of foam on the beach and every drop of every tidal wave and every cell of blood in our bodies.

Because Jesus fills the realm of heaven, Paul can write, “I have been crucified with Christ and I no longer live, but Christ lives in me” (Galatians 2:20). We can gain a greater intimacy with Jesus than is possible between two human beings in the flesh. We can abide in His body and have Him abide in our bodies (John 15:4) at the same time! It is in the mystery of this intertwined intimacy that we receive the power Jesus describes, which can at the same time be described as the Holy Spirit coming over us.

Now I want to go on a brief tangent to address a problematic misinterpretation that can occur with this verse. Some Christians interpret the Bible to describe three eras of history: the age of the Father (the Old Testament), the age of the Son (the life of Jesus), and the age of the Holy Spirit (Pentecost and afterward). They would say the reason Jesus had to go to heaven was because the Holy Spirit couldn’t be given to the disciples otherwise. This is a dangerously overconfident assertion to make.

When you split the Bible neatly into three dispensations, you’re basically creating a divinity of three Gods with completely different personalities instead of one God in three persons. This particularly comes out in the form of a bad cop / good cop duality between the Father of the Old Testament and the Son of the New Testament which expresses itself in a very bad theology of the cross where the Father Himself crucifies Jesus rather than sending His Son from heaven to redeem the world through the cross.

If God is Trinity, then God is Trinity at every moment in history. Whenever there is a word from God received by the Old Testament prophets, it comes by way of the Holy Spirit. When Jesus sends out the 70 disciples to drive out demons and heal people in Luke 10, they do what they do by the power of the Holy Spirit even though Jesus doesn’t use the phrase “Holy Spirit” to describe it.

4) “And you will be my witnesses in Jerusalem, and in all Judea and Samaria, and to the ends of the earth.” [Acts 1:8]

Jesus doesn’t need other witnesses. As Revelation 1:5 says, He is the one “faithful witness.” He rebuked the Pharisees who had challenged Him in John 8:13, saying, “You are testifying on your own behalf; your testimony is not valid.” Since the testimony of two witnesses is valid, Jesus says, “I testify on my own behalf, and the Father who sent me testifies on my behalf” (v. 18). Jesus doesn’t need to use us; He could have been a faithful witness to His Father’s truth all by Himself, completely independent of us.

But that’s not what He chose to do. He ascended to heaven so that we could be His witnesses. To be His witnesses means that we are not just passive recipients of His story; we become part of His story. He’s the only protagonist in human history whose goal is to make every member of humanity co-protagonists with Him. Jesus doesn’t just save us from our sins; He makes us relevant to His mission. I would even say that part of our salvation is the relevance He gives us, because so many stupid things we do are out of our attempt to be relevant. So rejoice in your relevance; you are a witness for the kingdom whom Jesus values infinitely, and He is reaching out to you through the Holy Spirit every moment with heavenly power.

Reconciliation and Bystanders
The one person a bullied person hates more than the bully is...

Untouched: Emotional Clumsiness, Covid, & Sensation Deprivation
Touch Whenever my daughter comes over with my grandson for a visit,...
view all Progressive Christian blogs
What Are Your Thoughts?leave a comment
Copyright 2008-2020, Patheos. All rights reserved.