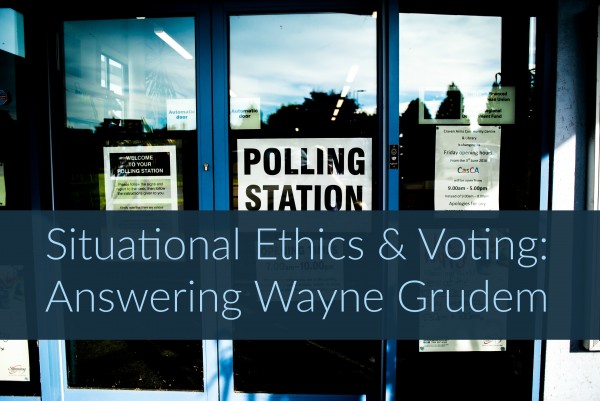 If I had a dollar for every time this year that I have encountered the phrase “lesser of two evils,” I would be as rich as Donald Trump claims to be. Few evangelical Christians advocate the election of Donald Trump directly—rather, it is on the basis of the claim that Trump, though seriously flawed, is better than Hillary Clinton. He is the lesser of two evils, they say.

Does the lesser-of-two evils kind of thinking come from a biblical worldview? Well, according to the highly regarded theologian, Wayne Grudem, yes indeed. The crux of Grudem’s oft-circulated article lies in the following assertion:

I do not think that voting for Donald Trump is a morally evil choice because there is nothing morally wrong with voting for a flawed candidate if you think he will do more good for the nation than his opponent. In fact, it is the morally right thing to do.

Grudem, who is highly respected, is making a moral argument that is being used to encourage Bible-believing Christians to vote for Trump. This article is aimed at the same audience. Neither Grudem nor I would ever think of imposing scriptural precepts on voters in general. This is a debate for those who voluntarily want to follow the Word of God.

You may note the lack of any reference to any passage from the Word of God supporting Grudem’s central claim. A full reading of his piece reveals that he never attempts to prove his central thesis from Scripture. In the entire article, Grudem directly cites only three passages of Scripture.

Grudem’s reading of these verses is non-controversial, but they lack any relevance to his central contention: that in choosing a leader of a nation, we should accept the lesser of two evils—even when both major choices are seriously flawed. Moreover, it is quite telling that Grudem fails to cite even one passage of Scripture in his discussion of the question of whether character matters in the selection of a leader.

The central question that thoughtful evangelical Christians are seeking to resolve is this: what does the Bible teach about the standards for voting in a democratic republic?

This question, however, requires me to answer a preliminary question: can we find guidance for voting in the Bible? I assert that we can. I will admit that it is not an easy question and that our study requires diligence, because Scripture does not contain a straight-forward passage that directly answers the question.

But, the sufficiency of Scripture to provide answers for every issue in life is quite clear. Psalm 19 declares, in majestic poetry, the all-encompassing power of the Word in our lives. Do we need to have understanding of a difficult and dark situation? “The commands of the Lord are radiant, giving light to the eyes.” Psalm 19:8. Moreover, 2 Timothy 3:16-17 proclaims that Scripture enables us to be “thoroughly equipped for every good work.” When Christians vote, we should aspire to do a good work, and the light we need to do so can reliably be found in Scripture.

Since voting in a democratic republic is not directly discussed in Scripture, we should first consult the passages that deal with the closest analogies possible. I would submit that the following sections should guide our discussion:

It is important to emphasize at the outset that I am using these passages not as direct commands or answers, but as containing guiding principles that lead us to the right answer. Those who reject anything from the Old Testament on the subject of government need to pay attention to this passage from Jeremiah 18:

God’s Word contains answers for every nation in every era.

Continue to find out the biblical standards for our authorities…

September 8, 2016
We Are About to Elect a Monarch
Next Post 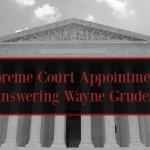 August 8, 2016 Why Grudem Is Simply Wrong About the Supreme Court as a Basis for Voting for Trump
Recent Comments
0 | Leave a Comment
Browse Our Archives
Related posts from Michael Farris: Defying Conventional Wisdom