Picking up again, we recall Emily’s question about the seemingly different messages of the two Testaments:

EMILY: . . . Where God was once fire and brimstone and eternal damnation, Jesus is water into wine, and healing and forgiveness.

GRANDPA: Regarding the Christian Testament, I think casual modern readers of the stories of Christ come up with a much too sweet picture of him as the paragon of “niceness.” That is not the way He suffered and died.

Moreover, Jesus is a fierce Judge of the behavior of others. He is not only as inclusive as some today stress. (In fact the very idea of inclusiveness begins with Him.) But He was also ruthlessly exclusive, insisting that those who rejected His friendship would get the full force of that choice: They would cast themselves, by their own choice, outside of His light, into “outer darkness,” distant from His mercy, love, and warmth forever.

Inclusive. He instructed His disciples to “preach the Gospel to all nations,” to include the whole world in their range of vision and calling.

Exclusive. But Jesus did not shrink from carrying forward the Jewish teaching about personal responsibility. He repeatedly stressed how at the end, the sheep would be divided from the goats, those who chose the good from those who chose against the good. And He did not shrink from warning that those who deliberately rejected the friendship that God invited them into would get their wish.

The Gospels picture Jesus warning that some people are casting themselves into the fires of Gehenna. Note: it is not fair to say that Jesus cast them there. Rather, no one goes to hell who does not reflectively and deliberately choose to turn away from God of her own free choice. And the real fire of hell is the acute consciousness, too late dawning, that you alone have chosen to be where you are, banished, as you chose, from His presence.

Before thinking of Jesus as extremely “nice,” recall these words of His:

The Son of Man will send his angels, and they will gather out of his kingdom all causes of sin and all law-breakers, and throw them into the fiery furnace. In that place there will be weeping and gnashing of teeth. So it will be at the end of the age. (Mt 13:41-42)

And if your hand causes you to sin, cut it off. It is better for you to enter life crippled than with two hands to go to hell, to the unquenchable fire . . . where their worm does not die and the fire is not quenched. For everyone will be salted with fire. (Mk 9:43, 48-49)

To my way of thinking, Emily, the most terrifying and bitter punishment that could await me in hell is the deep, deep regret that I have chosen my own banishment from the source of all beauty, all joy, all goodness, all truth. To have deliberately and consciously separated myself from all the pleasures and good things of life – from laughter and good red wine. To have sundered myself from communion with all brothers and sisters in the travails and blisses of human life. Not even Macbeth felt such bitter remorse. Hell is being trapped inside oneself. Or as Dante showed in his Inferno, trapped and immobile in the frozen ice of one’s own self-centeredness.

February 27, 2015
Why We Went into Iraq and Should Have Stayed There - Part Two
Next Post

March 6, 2015 The Ballad of Richard John - A Reworking and Shameless Borrowing of Chesterton's "Lepanto"
Recent Comments
0 | Leave a Comment
Browse Our Archives
get the latest from
Catholic
Sign up for our newsletter
POPULAR AT PATHEOS Catholic
1

12 Things Less-Remote Cooperation in Evil...
Through Catholic Lenses
Related posts from Coming down to Earth 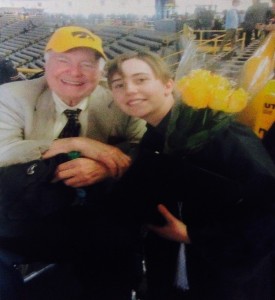