Materia Magica: Some Thoughts on the Stuff We Use to Do Magic

Hello, beautiful creatures! I don’t usually spend a lot of time talking about the technical aspects of magic, but I’ve been thinking a lot recently about the relationship between the material world, the numinous, and our own magical will. I thought it’d be fun to talk for a bit about our materia magica… which is Latin for “magical materials” and just means the material components of the spell, the physical substances you’re using as part of your ritual magical work, but sounds way fancier than “ingredients.”

Basically, you’ll find two schools of thought on the subject. The first is what I think of as the Hardcore Traditionalist school, which says you should never do any spell which calls for specific materia unless you’ve actually acquired that materia. This line of thought is predicated on the understanding that, unless you have exactly the right ingredients for the spell, your magic simply will not work. The second is what I think of as the Kitchen Witch school of thought, in which you use whatever materials you have to hand and, like a cook on a budget, substitute for anything you don’t have with whatever you do. This line of thought is rooted in the idea that, most of the time, whatever you’ve got in the pantry is close enough to get the job done, even if it’s not the “correct materia” for the spell.

Which one is correct? As with so much else in life, I think they’re both right… sort of. The Hardcore Traditionalists are correct that the materials we use affect the results we get. For instance, gods and spirits often have strong preferences about the offerings we make to them, and won’t respond as well (or at all) to offerings they don’t like. Similarly, some material substances have magical, energetic, or symbolic resonances with the work being done, and another substance simply doesn’t share that resonance. On the other hand, the Kitchen Witches are also right in noting that sometimes good enough really can be good enough. Having the special incense, the correct gemstone, the proper color of candles, and so on might be best form, but if you need a candle in the moment for a magical working, any color of candle is better than none at all.

Each approach has its pitfalls, as well. An insistence that only certain materials have the magical properties we need can become a sort of materialist belief that no magic can work unless it follows certain rules, and forestalling having precisely the right ingredients before doing the work is a devilishly efficient method of procrastination. As I’ve said elsewhere, the magic we actually do is far more powerful than the magic we tell ourselves we’re going to do, someday, when we have all the right materials. By the same token, insisting that the materials don’t matter can be an excuse for not putting in the work, an attempt to shortcut the process or, tellingly, a conviction that the work is unimportant because “it’s the intent that matters.”

To bring this back around to the topic at hand, many of the spells and workings I do call for water, salt, a candle, some incense, and an oil for anointing. Though I have strong Hardcore Traditionalist sympathies, in my personal practice I tend to fall more on the Kitchen Witch side of things, on the grounds that it’s better to half-ass something than to be entirely without a fundament. I want to suggest that the vast majority of the material components for our magic don’t need to be “special.” I mean, you certainly can use water collected from the Chalice Well or dewdrops gathered on the first morning of Spring, but most of us aren’t blessed enough (or Batman-levels of preparedness enough) to have those available to us. For most purposes, clean water from the tap or a bottle will do just fine. Similarly, you can use Himalayan pink salt from a fancy herb-and-spice store or sea salt you harvested yourself beneath the light of a full moon… or you can do what I do and use whatever salt you have in the kitchen. (Usually kosher salt in my case, just as Alton Brown taught me.) Like many magical practitioners, I have an embarrassingly large collection of candles secreted throughout my house, as well as a non-trivial variety of incenses. If you don’t, you needn’t feel self-conscious about it. A pack of utility candles from the local market and a box of stick incense will work just as well for most applications as fancy beeswax tapers and a planetary magical incense made from Grandma’s secret hereditary recipe, I promise.

This brings us to the oil, which can be a complicated subject. People have all manner of allergies and reactions, so it’s impossible to recommend a single oil which is universally applicable, pardon the pun. For most bodily applications, I suggest using coconut oil, which has the benefits of being largely hypoallergenic, edible, and widely available from most supermarkets. In any case, please be especially careful when anointing your eyelids, and avoid getting the coconut oil in your eyes. It’s not hazardous, but it will coat your eyeballs, leading to terrifically blurry vision until your eyes wash it out. I know there are a few people with coconut allergies, so if coconut oil doesn’t work for you, I encourage you to find an alternative which suits your needs. Be sure to use something safe for your skin, hypoallergenic, non-toxic, and preferably food-grade.

So, to recap, the following list of material components comprise what I think of as Misha’s Standard Ritual Kit for Quick’n’Dirty Magic:

Again, these material components don’t need to be fancy. In fact, I encourage you to at least try using whatever you have in your home already, or whatever you can acquire without any significant expenditure of time, effort, or money. If you’re of a highly ceremonial bent, you may find it highly instructive to work magic with table salt, tap water, a tea light, and whatever sweet-smelling dry herbs you have in the spice cabinet. For magic on the go, I carry a highly portable version of this quick’n’dirty ritual kit in a small metal Altoids breath mint tin: a few paper packets of salt from a fast-food restaurant, a stick of incense (broken in half to fit, and wrapped in a folded piece of aluminum foil), a small beeswax birthday candle, and a book of matches. I also throw in a few other small odds and ends I find useful when doing magic on the fly, none of which would cause anyone to glance at them twice unless they’re also a practitioner. Feel free to adopt and adapt this idea to suit your own needs.

Until next time, dear ones, use what’s handy. ♥ 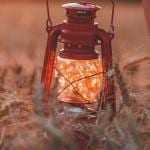 January 30, 2020
A Brief Theological Tangent on the Reality of Gods and Spirits
Next Post

February 15, 2020 The People Who Aren't There: Closing Remarks, PantheaCon 2020
Recent Comments
1 Comment | Leave a Comment
Browse Our Archives
Related posts from Outside the Charmed Circle

The Falsehood of Fae Propaganda
There’s tons of memes going around about how you shouldn’t make offerings...
view all Pagan blogs
What Are Your Thoughts?leave a comment

One response to “Materia Magica: Some Thoughts on the Stuff We Use to Do Magic”