A Letter from the MMW Editors

On Thursday, Eren published a great piece on the marginalization of lesbians in Indonesia. As with all MMW pieces, it received mixed feedback. Because we are fairly diligent regarding comment moderation, no comments that violated MMW’s comment moderation policy were approved.

On our Facebook page, however, there is no initial comment moderation. Thus, several hurtful comments were published. MMW’s comment moderation policy extends to our Facebook page (even if it has to be after the fact), and thus these comments were removed. The backlash, against both the initial post and the decision to remove comments that violate MMW’s comment policies, is what prompted us to issue this statement of clarification.

MMW isn’t the place for debate on what is and isn’t allowed in Islam. It’s not a place to judge other people’s Islam, either. We’re a media criticism website—MMW is a platform to discuss our representation in the media, not to discuss doctrine. Our aim is to critically look at how all Muslim women in the media are portrayed—not just the ones who seem to be practicing Islam according to any particular person’s standards.

Furthermore, in keeping with MMW’s attempts at inclusivity and keeping the website a safe space for everyone, we feel it’s unfair to exclude a group who are already often marginalized for their religion (and often ethnicity), not to mention their sexuality.

Finally, we and the other MMW writers would like to extend a heartfelt thank you to our readers and colleagues who have supported us in our efforts to make the website and Facebook page a safe and welcoming place to all Muslim women. We hope that this is an area where we will continue to improve. 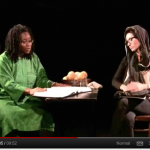