Booby-Traps and Breastfeeding in Guinea

My daughter Ivy devours bananas. She can finish off half a banana in minutes and screams if you take it away from her before she’s done. In fact, at five months old she has already tasted bagels, figs and chicken – stuffing anything within reach on my plate into her mouth. At birth, my other daughter Eryn absolutely refused to nurse, and I spent the first 48 hours of her life desperately feeding her a mixture of colostrum and water and eventually turned to formula when she lost too much weight. But we persevered and I successfully nursed her for three years.

For both babies, my intention was to follow the World Health Organization’s recommendation to exclusively breastfeed for the first six months of their lives. The girls, of course, had something else in mind – and I ended up joining the statistics of mothers who, for whatever reason, fail at following this important medical advice.

Despite the fact that health authorities around the world support the WHO’s recommendation, only 37% of mothers around the world exclusively breast feed for the recommended time. It’s 39% in the developing world, 25.9% in Canada, 14% in Australia, 8% in Brazil, and France doesn’t even register, with negligible breastfeeding statistics past two months post-partum.
Recently, IRIN released a report on the “shocking” decline of exclusive breastfeeding in the West African country of Guinea. Apparently, Muslim women and families are offering newborn infants water that’s been blessed by inscriptions of the Holy Qur’an, and will forgo initiating breastfeeding until this water treatment is administered:

“Countless babies in Guinea are not given their first breast milk for hours – however long it takes a designated family member to bring water that is used to rinse special Koranic verses inscribed on a wooden tablet. This symbolic liquid, the first thing many babies ingest, is just one example of a custom believed to protect children but that can instead jeopardize their health.”

Exclusive breastfeeding rates in Guinea have been cut in half over the past four years, declining to 18.5% in 2012 – and the report spends a lot of time making it sound like this ritual is the culprit, even though other forms of supplementation are mentioned. According to the report, families who administer water, shea butter, or a local tea along with breast milk to their infants, are doing so based on the misinformation that newborns need more than just breast milk to survive and thrive.

Also highlighted is an anti-breastfeeding attitude that if an infant dies, the mother’s milk is blamed. The woman is then discouraged from breastfeeding later children and could even be stigmatized. According to Mamady Kaba, head of maternal and infant health and nutrition with the international NGO Terre des Hommes-Lausanne, “some people use an age-old ‘test’ — pouring some of the woman’s breast milk on an ant. If the ant dies, people say that it proves the milk is bad.”

As a lactivist, I found this report to be incredibly interesting, but also problematic at times. There seems to be a thread of subtle mother-blaming and culture wars behind a seemingly informative and factual report, which for all intents and purposes is attempting to further a specific agenda, namely, adherence to the WHO recommendation of exclusive breastfeeding for the first six months. Now there’s nothing inherently wrong with this agenda. Health authorities give a lot of importance to exclusive breastfeeding — and for good reason. Not only is breast milk the most optimal food for infants, but there is also a long list of benefits for both mother and baby, and exclusive breast-feeding can prevent diseases like diarrhoea and pneumonia.

But the report clearly presents the Qur’anic water ritual as being a “problem,” “misinformation,” and “potentially harmful” – in other words, a barrier to ensuring infant health in the region. Apparently, health workers are going to war against mothers, sisters, mother-in-laws and village elders to protect infants from cultural beliefs against breastfeeding. It’s science versus religion, and literally, “breastfeeding versus old wives tales.” This ritual works against the WHO recommendation, and is nothing more than a dangerous superstition in need of correction. Unfortunately, no statistics are offered to support just how many families administer the ritual or to illustrate how many infants have actually been harmed because of it.

In fact, the report contradicts itself by including an interview with a woman whose family administered the ritual to her son – and now at one-month old, he’s thriving on breast milk. This is later juxtaposed with the story of an ailing infant who, at five months, is still at its birth weight. In this case, the mother turned to “store-bought milk products,” believing she didn’t have enough breast milk to feed her infant.

There is a long history of aggressive marketing of breast milk substitutes, correlating alarmingly with rising infant mortality rates in developing countries. So I find it strange that IRIN presents an Islamic-inspired tradition as “seriously harming infants,” when the more likely source of a change in cultural attitudes toward breastfeeding is the aggressive marketing of formula.

A point that is subtly buried near the end of the report:

“[UNICEF] says the decline is probably due to three factors: aggressive marketing of milk products has some women adding them to their babies’ diet; the 2008 study might have overstated the rate of exclusive breastfeeding; and socio-political instability in Guinea has hit community nutrition education activities.”

So there you have it. There is no conclusive evidence that mothers and families who participate in this religious ritual are actually harming their infants. But cultural imperialism and mother-blaming sure makes for a great story and headline.

What I did like about the report was the focus on educating families on breast milk production, the benefits of breast milk and the importance of addressing negative attitudes toward breast-feeding by encouraging families to support mothers. Women and their breasts are blamed for the death of infants whether or not a talisman is used for protection. So it’s not necessarily religious beliefs and practices that have to change, but attitudes toward breastfeeding and women.

There are many reasons why mothers supplement or abandon breast-feeding before the recommended time. So-called “booby-traps” can include gaps in the education on proper breast-feeding techniques, cultural stigmas, the health of the mother or child, poor employment rights and policies for the breastfeeding woman, aggressive formula advertising and marketing, social disapproval, or a lack of support from both medical professionals and family members.

It may very well be that the Qur’anic water treatment is a kind of “booby-trap” to exclusive and early initiation of breastfeeding.  According to the WHO, breastfeeding within the first hour of birth, “has been estimated to prevent 22% of neonatal deaths” – so yes, I can see why health workers would be alarmed if women in Guinea didn’t nurse their newborns immediately and supplemented with water or with the early introduction of food.

It’s obvious that the majority of women on a global scale are just not achieving the WHO’s recommendation to breastfeed exclusively. Whether it’s attitudinal barriers or gaps in support, sometimes things just don’t go as planned — something I experienced firsthand with my daughters.

So perhaps the recommendation is idealistic and shouldn’t be applied universally — at least not without making space for alternate views as long as it is safe to do so. But it’s reports like this one that may have the effect of of holding women, and the health workers that support them, to unrealistic standards — and instead, put the emphasis for what really needs to be changed. 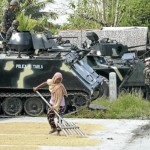 October 23, 2012 Looking “Pretty”: Muslim Women and the World of Cosmetics
Browse Our Archives
get the latest from
Muslim
Sign up for our newsletter
POPULAR AT PATHEOS Muslim
1