Love, Love, Love: Muslim Women and Marriage in the Media

Love and marriage and relationships have been everywhere these days, especially as they relate to Muslims, and particularly Muslim women. After reading a highly gendered, sexist and inappropriate article on the women that men should not marry, which fortunately was tackled by MMW’s Sara in a humorous piece, I decided to take a look into how Muslim women’s love choices (or lack of choice) have been portrayed lately in the media.

Starting with the fact that love + Muslim women equals an enormous list of sources in Google, it is easy to see that both non-Muslim media and sites dedicated to Muslim affairs pay a great deal of attention to questions of love, marriage and personal relationships.

The phrase “the personal is political” takes on a new meaning when we look at the variety of things that are said about Muslims, and particularly Muslim women, when it comes to personal relationships. From issues of polygamy and the role that women play in it to couples that challenge the religious divide in places like Myanmar  and the CIA’s use of marriage as a security-political tool to catch terrorists, there is something about Muslim love that is just too enticing that has to be shared.

Yet, coverage on Muslim marriage and personal relationships tends to be gendered. Many of the sources, whether Muslim or non-Muslim, emphasize female responsibility within the marriage and advocate for normative ideas of love or practical marriage. Looking at the ways in which Muslim sites “educate” women – particularly new Muslimas – and young couples on what to look for  in marriage and how to act as an ideal wife, it is obvious that some Muslims still believe that good relationships are purely women’s responsibility and divine duty. Likewise, Muslim women are such a mystery to Muslim men that they try to demystify what Muslim wives want by writing about them as a homogenous group.

On the other hand, non-Muslim media sources are not much better. In these sources, the choices that Muslim women make in regards to love and marriage are treated as something that needs to be exposed, explained and monitored. The “exotic” nature of women in veil (as if all Muslim women were veiled), the sex-appeal sometimes attributed to them and the claim that Muslims seem to be less likely to engage in pre-marital and extra-marital sex is responsible for such a fascination with Muslim women’s bedrooms and love thoughts. This may even account for some of the success surrounding books and stories like Love, Inshallah which was reviewed in February for MMW by Merium.

While reading Western-based news on Muslim women and their love lives around the world, I find that many pieces focus on particular practices or marriage arrangements that do not comply with Western ideas of love, individuality and choice. Practices such as swap marriages in Yemen, arranged marriages in places like Pakistan or Saudi polygamist families are frown upon and denounced as third-world-evil that threatens women’s “superior” status in the West.

So what is the fascination with our love lives and our beds? Is it the fact that what we do in the privacy of our own houses impacts many other areas of public life?

For authors like Irna Qureshi, taking about “love” is about teaching women to prioritize their emotional well-being. For Umm Zakiyyah, discussing relationships is about bringing men into the discussion of polygamy and making them accountable. For some other authors, it might be about protecting Muslim women from “horrible” Muslim men or trying to “free” Muslim women from things like arranged marriages and polygamy.

However, the gender aspect of it in which mostly Muslim women are addressed, questioned and put under the microscope bothers me. Is it that we are the only ones that need to talk about love and relationships? No men?

While I do appreciate the attempts to advice and bring light to issues among Muslim relationships, I feel that the sense of being observed does not help. The overbearing responsibility for love and relationships that is placed on women is not appealing. The dos and don’ts of being a “good” catch for marriage or an “ideal” wife are not alluring, and the obsession with comparing our private lives to the anyone’s ideals does nothing to actually guarantee Muslim women’s safety, happiness and loving relationships.

November 5, 2012
A Broken Record on Muslim Women’s Salvation
Next Post 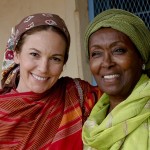 November 7, 2012 Half the Sky Documentary Revisited: Somaliland
Recent Comments
1 Comment | Leave a Comment
Browse Our Archives
get the latest from
Muslim
Sign up for our newsletter
POPULAR AT PATHEOS Muslim
1

BOOK REVIEW - Pieces by Afshan Malik
Review by Layla Abdullah-Poulos PIECES By Afshan Malik $19.99, pp. 184,...
view all Muslim blogs
What Are Your Thoughts?leave a comment

One response to “Love, Love, Love: Muslim Women and Marriage in the Media”