This post was written by guest contributor Rana Nazzal.

I had the honour of speaking with three local Ottawa artists about their identity as Muslim women in relation to performance arts.

A few years ago, I noticed a dramatic increase in the presence of Muslim women on stages in Ottawa, particularly in the fields of spoken word and slam poetry. I found their presence both welcoming and encouraging in a scene that may have otherwise been uncomfortable for myself and other Muslim women.

The reality is not necessarily that we are directly ousted from the arts. Rather, our invisibility in public spaces and media in the West is self-perpetuating. It is difficult to enter a space where we are not represented. As Muslim women break these boundaries and our visibility grows, others are encouraged to do the same. This is what has happened, at least, in the Ottawa poetry community.

Hodan Ibrahim and Sarah Musa are two prominent performance poets who have been active members of Ottawa’s spoken word and slam poetry scenes.

Hodan, in introducing herself, says, “I’m an innovator and an inspiring entrepreneur, but I think ‘artist’ is the most encompassing term to describe myself.” Sarah tells me that every aspect of her identity inspires her art: “the fact that I consider myself to be a feminist, to be a Muslim woman who is of the Somali-Canadian diaspora, that I’m Black … my educational background, my love for music, poetry, and writing, and various other things.”

I also wanted to hear the perspective of a Muslim woman performer outside the protective environment of the slam poetry scene. I spoke to Anastasia Filippova, a well-established singer who has released an album of self-written songs. In her own words, Anastasia identifies as “a singer, songwriter, teacher, woman, Muslim, and activist – in no particular order.”

In Ottawa, Islam has had a visible effect on the slam poetry communities. “Islam has an underlying influence in the poetry scene, in the sense that people are not afraid to express their spirituality through their poetry,” says Sarah.

Hodan says this was not the case before 2009. Things changed in 2010 when Urban Legends (UL), a new slam series, was launched. “Its founders are Muslim, Black, minorities, and they presented an alternative,” she says. The most notable feature of UL, which distinguished it from the other leading poetry collective, is that it is not hosted in a bar. Hodan adds that the identity of its founders played a role in creating a welcoming space for Muslims and other marginalized groups. In the year of UL’s founding, Hodan competed and secured a spot on the four-member UL team that would compete on a national level. In its second year, Sarah became one of the coordinators of Urban Legends.

Like most forms of media, the performance arts are male-dominated. “Being a woman,” says Hodan, “all I can say is that when I started slam, it was 95 percent men.” The reasons vary, she says, and have been changing.

Hodan says that much of the opposition she faced came from her own community. “I think a lot of us, people who are Muslim and female and who come from disadvantaged backgrounds, when we first saw older women of colour poets, were shocked.” Her experience highlights restrictions that Muslim women and women of colour may be internalizing as a result of the prejudices against us that abound in the mainstream. “I definitely feel a different reception from the audiences,” agrees Sarah, although she does not consider it discrimination. “I haven’t felt objectified per se, rather, I felt like, depending on the venues, some people did not take me as seriously as if they were to see a male poet.” She says that as women began taking to the stage, things became easier.

“It’s interesting that the [poetry] space is open for anyone to say anything but the fact that a woman, who is covered, is speaking, it creates a reaction from generally everybody,” says Hodan. Many of those reactions became positive, however. Her universal message has allowed her to transcend boundaries with her audience. “When I speak,” says Hodan, “every word that I say, I feel like God is working through me and I try to represent the Truth through my work,” She says she has never received as much respect as she did when she began performing her art. Sarah says that although she feels her audience receives her differently as a result of being a Muslim woman, the poetry scene is not discriminatory in the ways she has faced in other environments. “Discrimination I have ever faced has been outside of the poetry scene, generally in work place environments,” says Sarah.

Anastasia, as a singer, says she faces opposition in the Muslim community because her performance is highly disputed in Islam. “It’s not necessarily because Muslim events and record labels disagree with a woman performing. I think it’s because they believe they will lose a great deal of their followers. It’s a very controversial issue in our community,” argues Anastasia. As such, she often finds herself performing for events that are not related to Islam. “It gets tricky because then my content is looked at as ‘too Muslim’, or too ‘faith’-centred, or not wild enough for the mainstream.” Anastasia says her art is both inspired and disciplined by “the merciful messages and boundaries of my religion.” If any aspect of that happened to defer opportunities away from her, Anastasia says she would not change: “I don’t mind at all not being invited to certain events based on what I say or who I am. It is part of being an activist. It would be an honour.”

All three women agreed that as an under-represented group, it was up to them to create their own spaces. “If there’s anything that I’ve learned,” says Sarah, “it is that that no one will create venues for you. You will have to create them yourself.”

The identifying of “Muslim-friendly” spaces sends a problematic message in itself about the needs of our communities. “The fact that we need to have Muslim-centric shows is an issue,” says Hodan. “It demonstrates that this community needs a space to be created because they are not being served.” The women agreed that in the performance arts there is no great difference between a Muslim and a non-Muslim who both deliver a strong and truthful message. As such, there should be no need to differentiate between the religious identities of its participants, but, the reality is that racist, sexist, colonialist, and orientalist perceptions in greater Canadian society still affect us and our understandings of ourselves. Particularly as Muslim women, we are forced to contemplate our identity in the socio-political context of these challenges. The three women I spoke to, however, made it clear that their identities in terms of religion, race, and gender, have been inspirations and empowering to their art, rather than a hindrance.

March 4, 2013
Rise of the Niqabi Criminal: Balaclavas, Burkas and Bank Robberies
Next Post 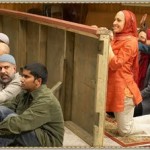 March 6, 2013 Mosques and Marriages: Manifestations of Patriarchy and Misogyny in the Western, Muslim Context
Browse Our Archives
Related posts from Muslimah Media Watch